It’s set to be another exciting weekend in Sky Bet League Two. Sporting Life’s Tom Carnduff previews the latest round of games.

We’re treated to a top-two clash this weekend as MK Dons welcome high-flying Lincoln with both aiming for automatic promotion this season.

Lincoln are closing in on promotion to Sky Bet League One as they sit eleven points clear with 18 left to play for.

Milton Keynes also find themselves in the right place with a cushion of three points between themselves and the play-offs, that’s thanks in part to back-to-back victories heading into this clash.

Bury are looking to halt a run of two defeats when they go to Carlisle, who are hopeful of a spot in the top-seven.

United are another side enduring a difficult run of late and are aiming for their first win in four. Victory here will go a long way in achieving their separate goals this season.

The team hoping for a slip-up will be Mansfield, who sit two points behind Bury in fourth. The Stags bounced back from defeat at home to Crewe with a convincing win over promotion rivals Exeter.

A clash against Cambridge awaits them next, who have also experienced differing results in recent weeks. Victory last time out though should be enough to keep them away from any relegation trouble in the run-in.

Tranmere’s run of seven consecutive victories was ended at the hands of Oldham in midweek, and they face another side enjoying victories as of late in Newport.

County have seen three wins in their last five and that has moved them to within six points of the play-offs. It’s a big ask, but if they continue their good run then it is more than possible.

Forest Green are one of the teams battling off the chasing pack as they look to hold their spot in the top-seven.

Rovers have lost just one of their last four games and this week sees them travel to a Crawley side at the opposite end of the standings, with three consecutive losses to their name.

They are still seven points clear of the relegation zone though and have picked up points in three of their last four home games.

In terms of relegation, it looks like it will be three teams who are aiming to avoid finishing in the two places that would mean lining up in the National League in August.

Macclesfield currently occupy the bottom spot, but they have picked up five points from their last possible nine and that has put them to within a point of safety.

They have home advantage this week as they face a Morecambe side who haven’t won in their last three away. That said, they have only lost two of their last eight on the road.

Notts County are only kept in the relegation places by goal difference, and like Macclesfield, they have also hit form at the right time.

Neal Ardley’s men have picked up points in three of their last four games, which includes victory last time out against Stevenage.

They are also at home this week against a Northampton side who have lost their last two. The Cobblers will be difficult opponents though, given how they have only lost one of their last six away.

For Yeovil, they’re enduring a run of five consecutive defeats and that has seen them drop down the standings.

They have also struggled on the road, with seven losses in a row away from home. However, they’ll be hoping that a managerial change can move them away from danger.

This week sees them go to Swindon. Town are unbeaten in their last five in front of their own supporters, winning three, which has helped them to move to within four points of the play-offs.

The final team in the play-off places are Exeter. They have experienced mixed fortunes in recent weeks but still remain where they want to be.

It’s a tricky test next though against a Cheltenham side who have won three of their last four, while also winning six of their last seven at home – the other result being a draw.

Colchester will be hopeful that Cheltenham can do them a favour as they host an Oldham side who have hit a bit of form recently.

The U’s managed victory last time out at Cambridge and a win here could be enough to move them into the division’s top-seven.

Elsewhere, two sides in mid-table meet as Grimsby host Stevenage. Both sides haven’t won in their last three, which highlights the importance of victory here.

Port Vale are sitting in 20th but should stay clear of any relegation trouble. They will be looking to build upon victory over Northampton as they welcome Crewe.

Crewe though have lost just one of their last four, meaning this is a game that is too difficult to call. 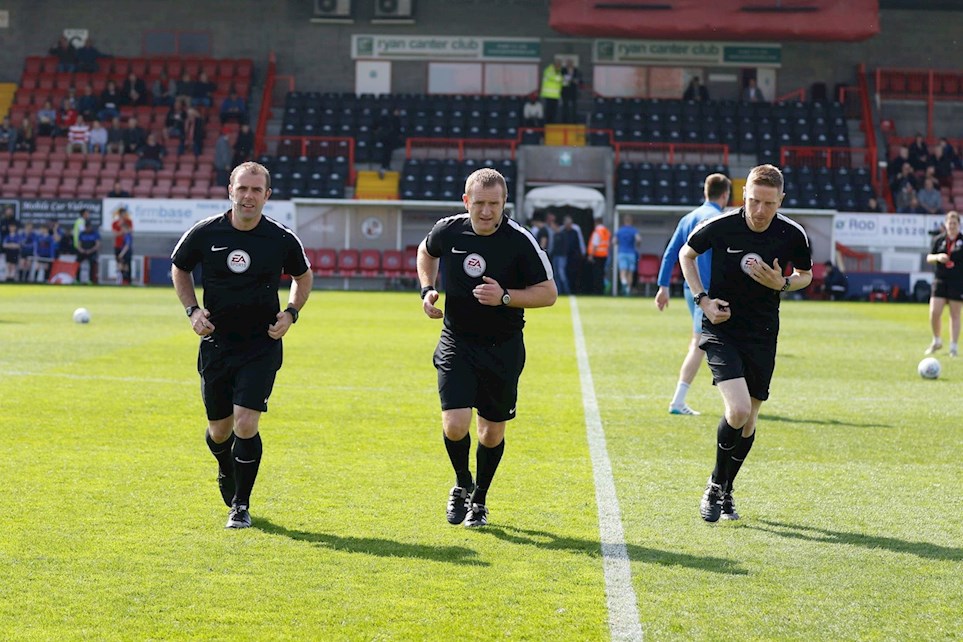 
Lee Swabey will be the man in charge when Oldham Athletic take on Colchester United this Saturday in the Sky Bet League Two fixture (3pm).

First-half goals from Alex Iacovitti and Callum Lang made it three wins on the bounce for Latics after also a terrific defensive display in the second-half.

Head Coach Pete Wild named an unchanged starting line-up once again and it would prove fruitful as the side started the stronger away from home.

A couple of minutes in Lang found Hamer on the edge of the box who connected well with the ball, his effort just going wide of the top-left corner.

Then on the fifth minute the lads in Tangerine took the lead. Nepomuceno with the corner on the right found Lang at the back post. His knock-down then fell to Clarke, his shot then went into the path of Iacovitti who shot across goal from close range.

Shortly after Oldham found themselvs two goals in front when the U's gifted the ball to the in-form Lang. A hard back-pass couldn't be controlled by Barnes in the Colchester goal. Instead of stopping a corner he gave the ball to the on-loan attacker and duly accepted the offer to curl it into the bottom corner.

On the 21st minute Lang nearly doubled his tally but the U's keeper pulled off a brilliant instinctive save to his left to redeem some pride.

Minutes later and Missilou drilled a shot from range that stung the hands of Barnes after Colchester failed to clear three successive corners to keep Latics in total domination in the early stages.

The first real chance for the hosts came on the half-hour mark when Vincent-Young cut inside from the left. His effort fell straight into the hands of Iversen.

As the opening 45-minutes came to a quiety end Colchester tried to increase the pressure on the Oldham goal as penalty appeals were waved away from referee Swabey.

The last bit of action save Senior break on Latics after collecting the ball but Edmundson did enough to put the winger off balance.

As the light drizzle on a cold afternoon in Essex eased up for the second-half it was John McGreal's side who started the stronger to try and reduce the deficit.

A good spell of pressure for the hosts saw corner after corner for the home side but Iversen held onto the ball after Norris rose highest to head on target.

As Colchester took it up a gear the Oldham defence stood resolute, but on the hour mark it was Lang who tried to make something out of nothing. His shot from outside of the box took a bobble and Barnes had to push away a troubling effort.

With not much action apart from the U's trying to find their way through, it was substitute Nouble who had a golden chance to get a goal back for the home side. He failed to direct the ball on target from a couple of yards out after a low shot was fired in.

As the game entered the final ten-minutes it was Iversen who was called into action again, stopping a free-kick from Dickenson nestling into the top right.

The pressure kept piling on the Oldham defence but block after block they kept Colchester at bay to record another professional performance and important confidence boosting result.


Lee Swabey will be the man in charge when Oldham Athletic take on Colchester United this Saturday in the Sky Bet League Two fixture (3pm).

Tickets for Oldham Athletic’s game at Colchester United are still on sale as part of the hosts progressive pricing.

The club have received an initial allocation of 286 tickets. The early bird price has now finished and instead a 'week advance' sale between 28th March and 5th April has started. Tickets have slightly risen in cost but are still cheaper than the matchday price.

Please note that ID may be required when purchasing a ticket.

Tickets will go off sale on Friday, April 5 at 3pm. 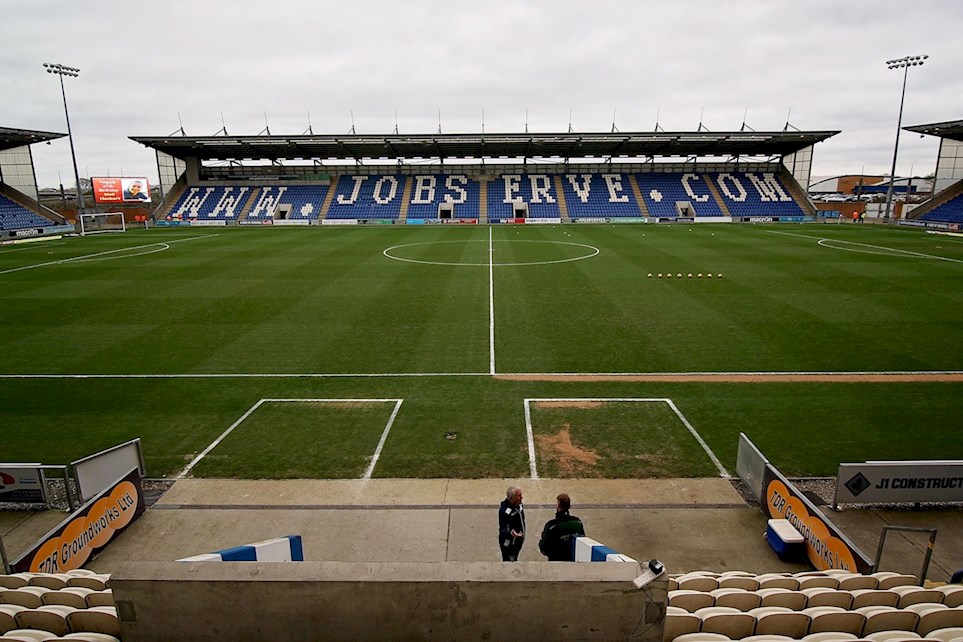 
Tickets for Oldham Athletic’s game at Colchester United will be on sale tomorrow from 9:30am.