Next week (Monday 22 April) there will be disruption to a number of supporters.


Latics penultimate home fixture of the season has been chosen for Sky Sports coverage.

Goals from Nepomuceno (2) and Maouche against promotion chasing Mansfield make it six games unbeaten for Pete Wild as Head Coach.

Making two changes, Sylla and O'Grady were brought in for Afolayan and the injured Baxter.

Latics started the game well controlling possession and looking the more likely to create an opening in the first ten minutes.

As Mansfield continued to take their time to get into the tie, Maouche unleashed the first meaningful effort on the 19th minute. His curling effort going close to the top left-hand corner after creating an opening on the right.

A couple of minutes later and Iacovitti twisting and turning on the left beat his man and with his weaker right foot curled a low effort across goal that went wide of Logan's post.

As both sides went through the motions, it was Oldham who got Boundary Park rocking with Nepomuceno getting on the score sheet on the half-hour mark.

Getting the ball in the Mansfield box after a low cross by Maouche on the right, the Curacao international took one touch to settle himself before stroking the ball into the Stags' net.

The visitors looked for a quick response as the pressure was firmly on but Mansfield couldn't create that all important clean-cut chance.

Their first came on the 36th minute when Sweeney five yards out headed high and wide at the near post after a corner from the right.

But it was Latics who went in at the break one up.

Mansfield had the first chance of the second-half but as the ball returned into the Oldham penalty area Iversen claimed the effort to relive the pressure.

With a bumper crowd on a sunny Easter Monday Oldham responded with a number of threatening attacks, the final crucial through ball the missing ingredient though.

The excitement grew with good inventful play but as Missilou tried to get the cross in Logan jumped on the loose ball to give his side some time to recover.

It wouldn't last long though as Maouche got on the scoresheet on the 55th minute, turning the ball home from close range on the turn in front of Lang.

The chance fell fortunately to the Frenchman after a Nepomuceno shot was blocked in the box following some fast attacking play on both wings.

The tension grew once more when the Stags pulled a goal back through Walker, finishing well after putting it through Iversen's legs once the Oldham defence was cut open on the hour mark from a Mellis pass.

Latics once more responded in delightful fashion seven minutes later. Nepomunceno getting his second with a thumping effort that broke the top left corner once it left his left foot.

A couple of minutes passed before Oldham nearly got their fourth of the afternoon in an entertaining end-to-end fixture.

But the Mansfield keeper stayed big as Lang found time and space on the right before collecting the ball and driving into the box as his shot hit Logan before the danger was cleared.

Boundary Park was bouncing as the game entered the final stages with Latics using attack as the best form of defence as the Oldham wingers continued to have great joy all afternoon.

Mansfield got their second to keep the game alive through Neal Bishop, his low shot from the edge of the penalty area unchallenged nestled into the bottom right corner to make it a nervy affair with 15 minutes remaining.

O'Grady and Lang went close straight at the other end. The former getting free on the left, shooting across goal where Lang couldn't get the final touch as the ball trickled past the post.

Mansfield's Walker then has a glorious opportunity to level the scores on the 80th minute. His first time shot, always rising, didn't trouble Iversen.

With only minutes remaining Oldham tried to keep the ball away from their own area.

But the final bit of action fell to the visitors. Failing to deal with the threat a shot hit the post before being turned in by Rose. Thankfully though it was waved offside to see out a terrific result to keep the season alive that bit longer.


Next week (Monday 22 April) there will be disruption to a number of supporters.


Latics penultimate home fixture of the season has been chosen for Sky Sports coverage.

Admission prices have been reduced for the visit of Mansfield Town to Boundary Park at Easter.

Latics' penultimate home league fixture of the season sees the promotion chasing Stags come to town along with the Sky Sports cameras on Easter weekend.

The fixture takes place on Monday 22 April (3pm kick-off) and the club would like to see the support of the local community for the excellent job Pete Wild is doing and has already done this season.

Reduced Admission Prices (in all areas of the ground):
£5 Adults
£3 Concessions
£1 Under 18

Or alternatively contact the Ticket Office on 0161 785 5150 and/or Supporter.Services@oldhamathletic.co.uk

Tickets will also be available to purchase on the day of the game from the Ticket Office (for card payments) and turnstiles (for cash payments).

For supporters who have already purchased match-day tickets for this fixture at the original price, a refund* of the difference can be claimed immediately by using the contact details above.

*The refund relates to additional or new purchases not season card holders. All your rights as a customer can be found by clicking here. 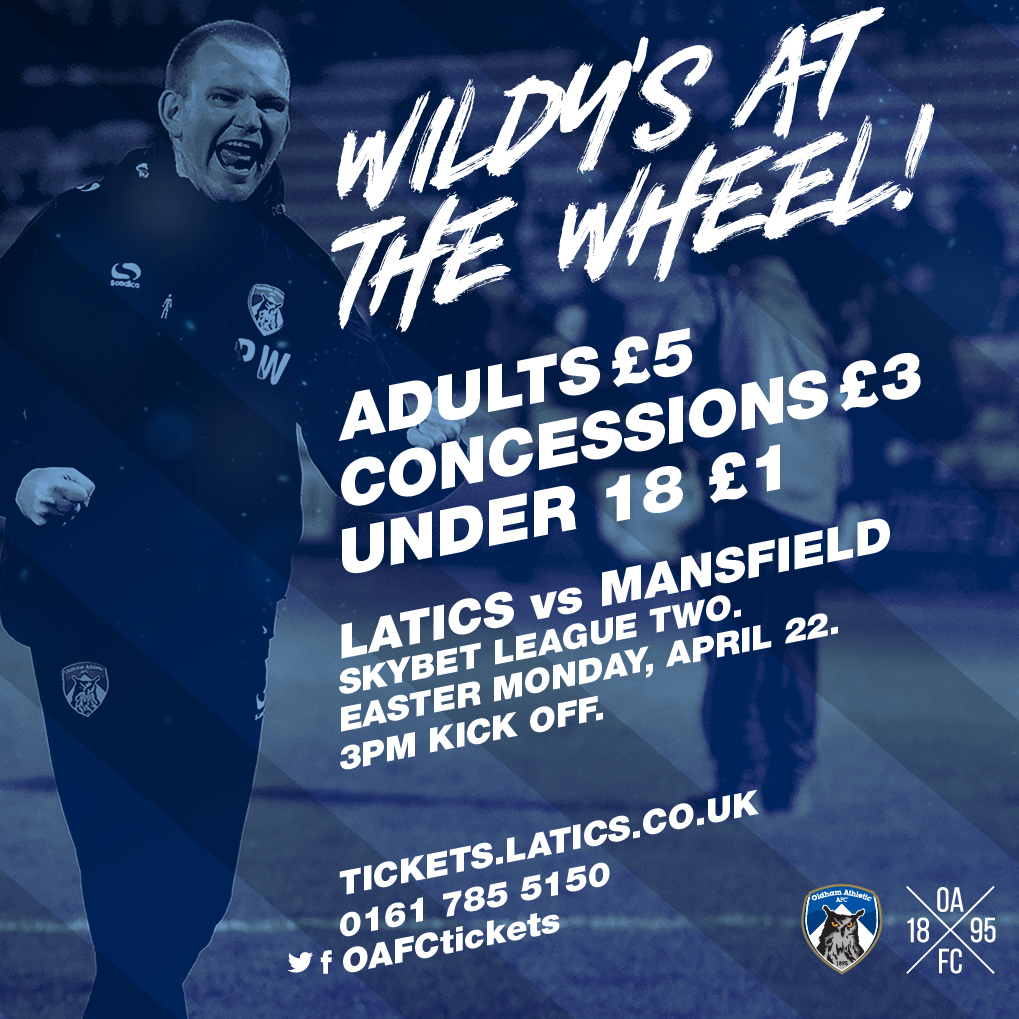