Oldham Athletic are back in action tonight as they take on Blackburn Rovers at Ewood Park in the first round of the Carabao Cup (7:45pm).

At the weekend, Latics suffered a 2-1 defeat at home to Crewe Alexandra in a Sky Bet League Two fixture.

Oldham took the lead through Christopher Missilou before former Latics striker Chris Porter netted twice to pick up three points for his side.

Head Coach Laurent Banide wants to see more spirit and character from his side against Blackburn Rovers.

“Every time we go into a game we want a result because it’s the way that we work, we must play for a result and try to have better positioning, better spirit and better quality." He said.

“We can improve by the game, training is not important but what is important is that we must see in the game what we work on in the training ground at the moment we don’t see enough.

“In training, everybody works well and in the game, it isn’t the same, we expect more quality.”

Latics will be without the injured trio of David Wheater, Marvin Kokos and Tomas Egert.

Wheater was more of a precaution according to Banide, with the Latics Head Coach not taking a risk on the central defender unless he's fully fit.

Blackburn Rovers could make a whole host of changes tonight with Greg Cunningham expected to make his debut.

They currently sit bottom of the Sky Bet Championship table after losing their opening two games against Charlton Athletic and Fulham.

The last time Latics and Blackburn met was in February 2018 at Ewood Park.

Latics went into half time 2-0 ahead from an impressive double from Duckens Nazon, but Rovers pulled two goals back in the second half to share the points.

Oldham Athletic are priced at 6/1 to beat Blackburn Rovers.

If it's a draw after ninety minutes tonight then the game will go to a penalty shootout. 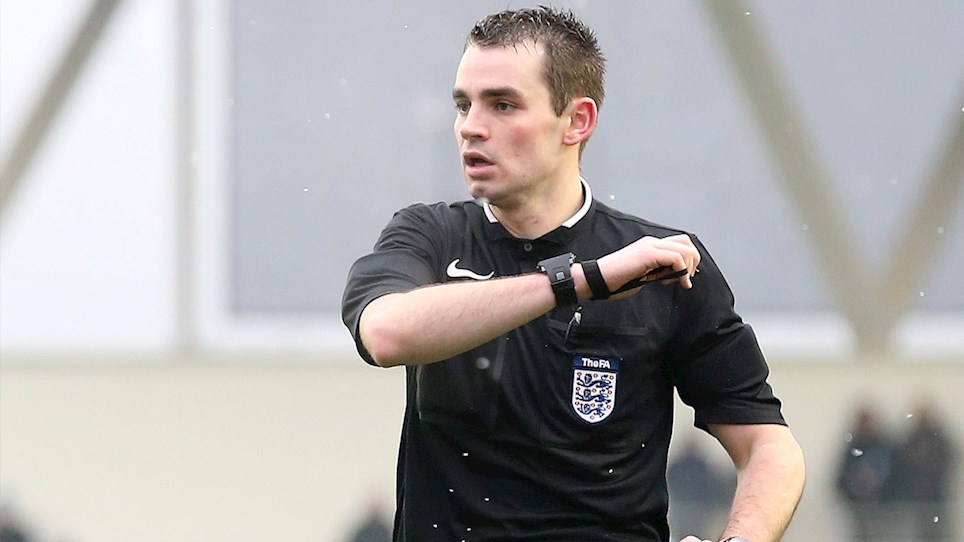 
Tom Nield will be the man in charge when Oldham Athletic take on Blackburn Rovers tomorrow night at Ewood Park (7:45pm). 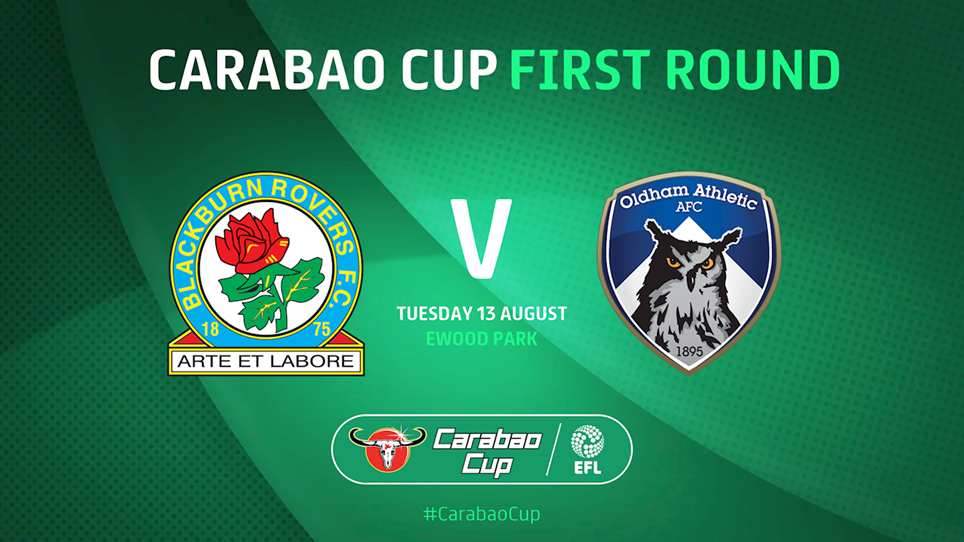 Carabao Cup Round One Details


The hosts have confirmed the ticket details for the opening round of the 2019/20 Carabao Cup.

Oldham Athletic have been knocked out of the Carabao Cup after a 3-2 defeat against Blackburn Rovers at Ewood Park.

It was a slow start to the game for both sides’, the first chance came in the 10th minute when Missilou tried his luck from a tight angle but his strike went over the bar.

Latics took the lead in the 14th minute when Gevaro Nepomuceno drove at the Blackburn defence before smashing a low strike into the bottom corner of Jayson Leutwiler’s goal.

The host nearly equalised when a cross came into the Oldham box, Danny Graham failed to make contact with the ball with his header but it landed to Corry Evans and his strike was blocked on the line by Ashley Smith-Brown.

Moments later, Stuart Downing put a cross into the box and was met by the head of Ben Brereton but he headed wide of Gary Woods’ goal.

Shortly after half-time, John Buckley raced down the right-wing for the home side and put the ball into the box and Brereton header was denied by Woods.

The home side should have been level following good play from Harry Chapman and Bradley Dack inside the penalty. Dack chipped the ball to the back post and somehow Brereton’s header was blocked on the line by Zak Mills and hit the post before Woods claimed the ball.

Latics countered and Johan Branger-Engone tried an ambitious effort from way outside the Blackburn penalty area but it was easily caught by Leutwiler.

Rovers found an equaliser in the 70th minute after Smith-Brown lost possession inside his own penalty area. Graham laid it off to Dack and the substitute slotted it past Woods and into the back of the net.

The host thought they took the lead when Missilou deflected a Blackburn free-kick into his own net but it was disallowed.

Latics took the lead in 80th minute as Dylan Fage swung a cross into the box and it was cleared to the edge of the box and there was Mohamed Maouche who smashed the ball into the top corner.

Dack nearly got the home side level again and he tried to sneak his shot under Woods but the goalkeeper stayed strong.

Following that, Graham headed the ball down to Dack and the midfielder’s shot went just wide of the Oldham post.

In the 92nd minute, Blackburn found a leveller through Downing. His long shot from outside the penalty area found the bottom corner.

And in the 94th minute, the home side nicked a very late winner as a long ball over the top landed to Dack, laying it off to Joe Rothwell, who slotted into an open net and sent Blackburn into the Second Round of the Carabao Cup.


Tom Nield will be the man in charge when Oldham Athletic take on Blackburn Rovers tomorrow night at Ewood Park (7:45pm).

Carabao Cup Round One Details


The hosts have confirmed the ticket details for the opening round of the 2019/20 Carabao Cup.

Pay on the day is now available for Oldham Athletic’s trip to Blackburn Rovers tonight in the Carabao Cup 1st Round.

The club have been given an initial allocation of 1020 tickets, Latics fans will be situated in the Bryan Douglas Darwen End Stand.

You can purchase and collect tickets at the Blackburn Rovers ticket office.

U18s travelling without an adult must fill out a parental consent form, to download the form, click here. 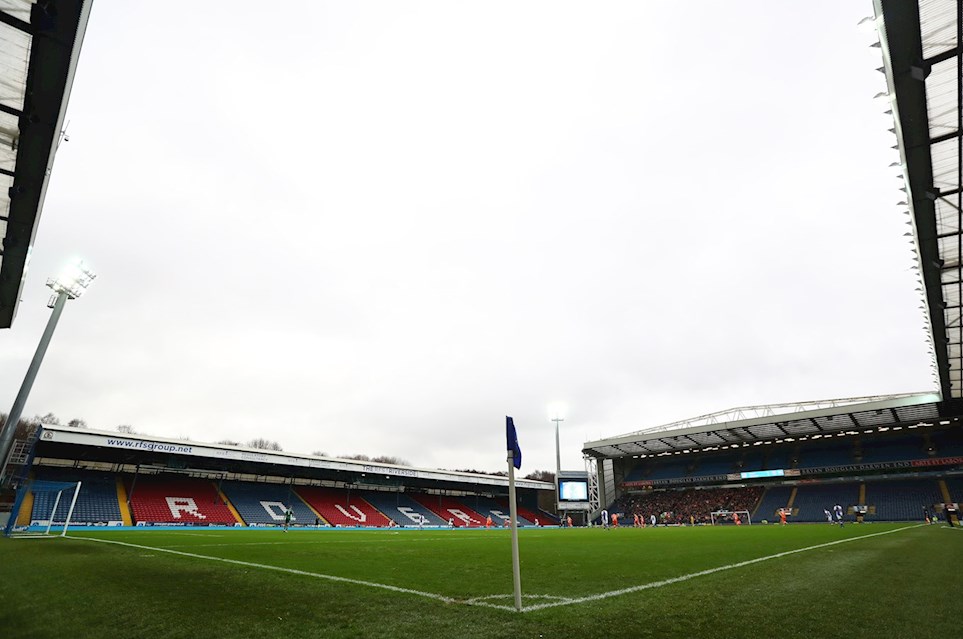 
A reminder that tickets for Oldham Athletic’s trip to Blackburn Rovers in the Carabao Cup First Round are still now on general sale.


Tickets for Oldham Athletic’s trip to Blackburn Rovers in the Carabao Cup First Round are now on general sale.


Tickets for Oldham Athletic’s trip to Blackburn Rovers in the Carabao Cup First Round are now on sale for Season Card holders.