Oldham Athletic are back in action tonight as they take on Exeter City at Boundary Park in a Sky Bet League Two fixture (7:45pm).

At the weekend, Latics suffered a heavy 3-0 defeat away at Bradford City. The hosts took the lead when their captain James Vaughan tapped home from a Callum Woods cross.

Latics nearly equalised through captain Mohamed Maouche but his shot struck the post and the Bradford defence cleared the danger.

The Bantams doubled their lead when Clayton Donaldson raced clean through on goal and smash his strike past Gary Woods.

In the 72nd minute, Gary Bowyer’s side sealed all three points as Sean Scannell raced into the Latics penalty box before unleashing his shot into the back of the net.

Head Coach Laurent Banide believes that his side needs to find a solution to the poor start to the season.

"Every time we are in a reaction. We must be in action and we cannot start a game after three minutes, take a goal like that and the second goal like that, it's impossible.

"So after we need to find a solution because we must do something to change that.

"You lose a game because you take two goals in the first-half because you're not concentrating and you make a mistake."

Latics may be without Mohamed Maouche and Christopher Missilou due to knocks, whilst Tomas Egert and Marvin Kokos are still unavailable for selection due to injury.

Exeter City have had a good start to the campaign and currently sit second in Sky Bet League Two. The Grecians have beaten Macclesfield Town and Stevenage and drawn to Swindon Town in their opening three league games of the season.

Oldham Athletic are priced at 9/5 to beat Exeter City tonight.

Mike Leyland and Roy Butterworth will be on commentary on iFollow Latics for supporters who cannot make the game. Where a live match pass on iFollow in both the UK and overseas at the cost of just £10 can also be purchased.

Please note that the Supporters Bar (O2 Suite) will be open from 6:30pm with kiosks in all the stands (including Joe Royle Stand) open from the same time due to the new partnership with Quirky Catering.

The newly refurbished Club Shop is currently open and will close at 10pm.

However, the two Community Trust tuck shops will not be open in either the Jimmy Frizzell Stand or the OACT Family Stand. Hot food will still be available. We apologise for any inconvenience caused on this part.

Also, once inside Boundary Park there will be no transfers to other parts of the stadium. Those throwing any article on to the playing surface or into the crowd, or going onto the playing area itself, are still classed as criminal offences and will be prosecuted accordingly. 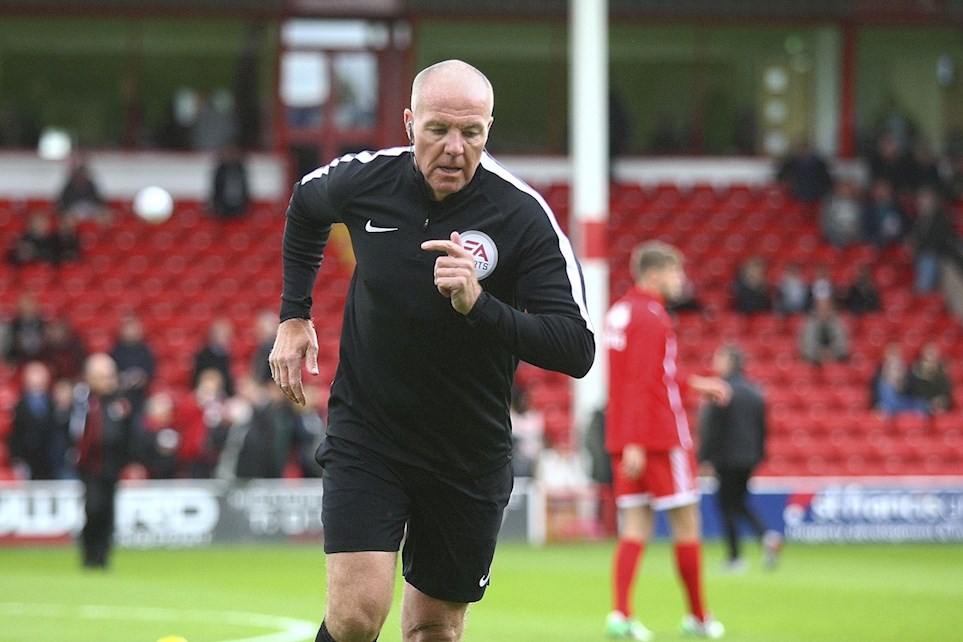 
Graham Salisbury will be the man in charge when Oldham Athletic take on Exeter City tomorrow night at Boundary Park (7:45pm).

Oldham Athletic picked up their first point of the season in a 0-0 draw against Exeter City at Boundary Park.

The first chance of the game fell to Dylan Fage after a cross into the Exeter bottom from Hamer was cleared it fell to Fage on the edge of the box and he scuffed his shot over the bar.

The visitors nearly broke the deadlock in the 10th minute when Jayden Richardson dribbled down the right before driving a low cross into the box and it met Lee Martin and his shot was deflected just wide of the Latics goal.

Exeter came close following a free-kick that was crossed into the box and cleared by David Wheater and it fell to Lee Martin who beat Mohamad Sylla but he dragged his shot wide of the target.

The Grecians should have been ahead in the 30th minute when Ryan Bowman turned Alex Iacovitti in the box but he shot on goal was easily collected by Gary Woods.

Gevaro Nepomuceno came close to putting Oldham ahead when he cut in from the right-wing and he tried his luck from outside the box but it just went wide of Lewis Ward’s goal.

Just before half-time, Johan Branger-Engone should have given the hosts the lead. A brilliant delivery from Ashley Smith-Brown landed to an unmarked Branger-Engone but he headed wide from the edge of the six-yard box.

After the restart, Exeter came close again as Lee Martin was allowed to turn inside the penalty area, but strike went across goal.

Somehow in the 63rd minute, Matt Jay failed to put Exeter ahead. Great work from Jack Sparkes down the left and he crossed into the box and found Jay and his header went wide of Gary Woods’ goal from only yards away.

The Grecians continued to apply pressure on Latics, and a ball was played back to Nicky Law on the edge of the box and his strike went just wide of the post.

Latics thought they had taken the lead with 78 minutes on the clock. A corner was headed down by Wheater and Tom Hamer blasted a strike a goal but it was cleared off the line by an Exeter defender.

Moments later, Wood managed to keep the scoreline the same as Jake Taylor raced clean through on goal but was denied by the Latics goalkeeper.

It looked like Exeter City nicked a winner in the 94th minute when Jay headed home from close range but it was ruled offside.


Graham Salisbury will be the man in charge when Oldham Athletic take on Exeter City tomorrow night at Boundary Park (7:45pm).