Latics will be looking to stop the rot after defeat at Cheltenham as they now make the shorter journey to Macclesfield this weekend (3pm KO).

Dino Maamria’s side has been bolstered defensively and offensively since last time out with the club securing the signatures of Carl Piergianni and Mani Dieseruvwe on loan from Salford City. The duo are available for the game.

Latics succumbed to a third defeat in as many games at the Jonny-Rocks Stadium and are still in search of their first points since the turn of the new year.

On the other hand, Macclesfield ended an 11 game run without a win in their victory over Cambridge United last weekend and will be looking to make it back-to-back wins for the first time since they won at Boundary Park in October.

Latics have won just one of five previous encounters against the Silkmen, this coming in August 2018, with the opponents winning the last two.

Latics won for the first time of the season, condemning newly promoted Macclesfield to their third loss on the bounce since coming up to League Two as National League champions.

An early goal for loanee striker Sam Surridge gave the hosts a great start to proceedings and ensured they were in front at the interval. 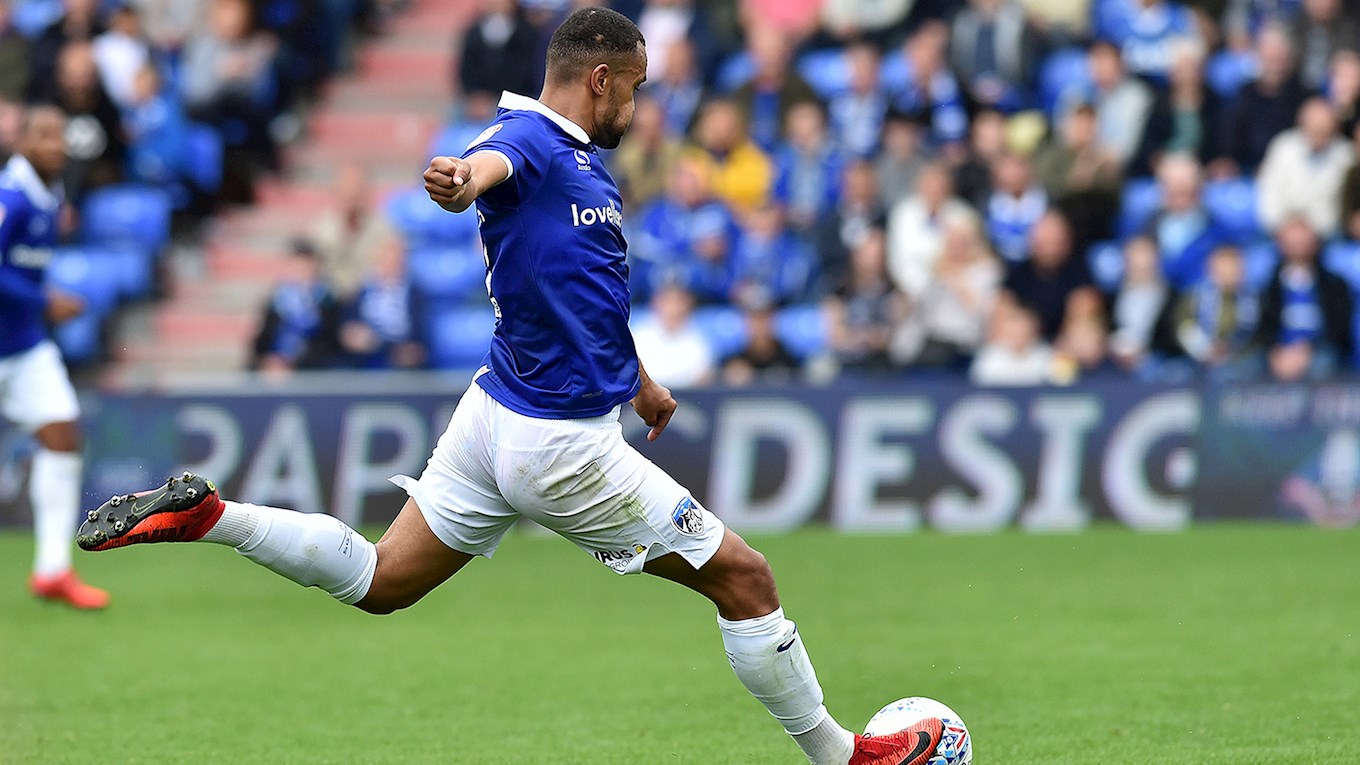 Johan Bragner doubled Latics lead not long into the second-half but the two goal cushion did not last long. Michael Rose converted a free kick on the hour mark to give the visitors hope that they could get something out of the game but these hopes vanished in the third minute of stoppage time when Ishmael Miller scored a fine goal to make sure the points were Oldham's.

The result lifted Latics to 12th with their first three games consisting of a win, a draw and a loss. On the other hand, Macclesfield were now one of just three clubs yet to pick up a point and sat 23rd in the Sky Bet League Two table at the time.

Macclesfield’s season started fairly well with the club losing just two of its first six matches, winning three of them, however since then they have endured a turbulent season.

Follwing a 1-0 win over Scunthorpe in August, the Silkmen had to wait till mid-October for their next league win, which came against Port Vale. Macc have only lost one of their last eight league games but have only won one of these with the club drawing six in that time.

There has been plenty controversy surrounding Macclesfield as well off the pitch and the club were recently docked points by the EFL over financial reasons.

The points deduction means they have dropped to 22nd in League Two, two places and three points worse off than Oldham.

Despite the opponents issues, Head Coach Dino Maamria is fully aware the threat they pose and wants his team to use this fixture as a turning point after being defeated by the Silkmen earlier on in the season.

"Obviously the mood when you're losing games is never great. I never understand people who say, 'I'm enjoying it, I'm loving it’. I'm only loving and enjoying it when I'm winning. But it's football. You get your bad period and unfortunately for us it's all happened in one week. I was always concerned about that period with the squad we have. We started the period quite strong and then we finished it poorly.

"We're missing some key players, I think that's the biggest part of it. We lost our way a little bit in terms of work on the training ground and we couldn't manage to do that with the games between them. We lost that resilience, that hard to beat mentality, that back three and back four work we've been doing. This week has been good for us to get back to doing those things with those basics.

"It's been a good week for us because we got to go back to that. I'm pleased about this week but I know that we've got two huge games on Saturday and Tuesday in quick succession.

"We've got a big three games in total and we are capable of beating those teams because we've proved that we can beat those around us. Having said that, we have to be much, much better than what we've been in the last three games."

Caretaker Manager Danny Whitaker is upbeat after a confidence boosting victory last time out at the Moss Rose which was their first since beating Latics in October.

Despite losing their number one keeper, Whitaker is looking for more of the same from his hardworking side.

"Winning games of football breeds confidence we all know that. It's obviously nice not to lose but when you've drawn as many as we have it feels like you're never going to win, so it was nice to get that win.

"Every team is a threat in this league, you don't know what they're going to bring one week from the next because it's very random and the league has proved that this season."

Current Latics forward Scott Wilson used to turn out for the Silkmen. 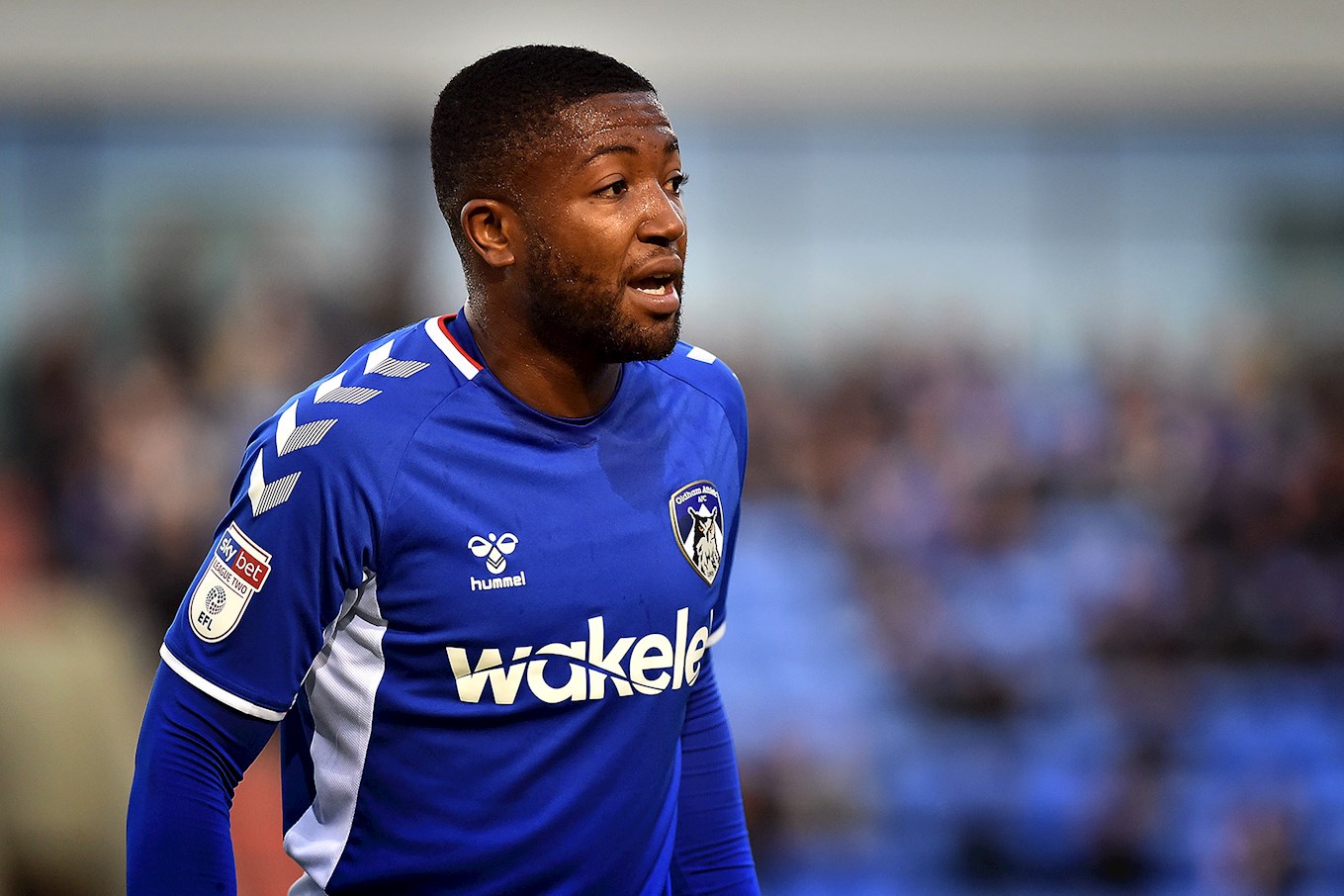 Wilson joined Macclesfield from Eastleigh in 2017 on a one-year contract and was a success at the club; he was the top scorer for them and in turn helped the club win promotion from the National League to League Two. He was also instrumental in assisting the club to safety in the Football League the following season as he was top scorer for a second season running.

Wilson scored his first goal for his new club at Boundary Park against Northampton Town which was the first of two late Oldham goals to rescue a point at home.

The Bristol-born striker started his career with City in his hometown but failed to make a league appearance for the club and was confined to non-league until helping Macclesfield out of the National League.

Macclesfield Town play their home games at Moss Rose. The 6,355 capacity stadium was built in 1891 which makes it one of the oldest grounds in the EFL. 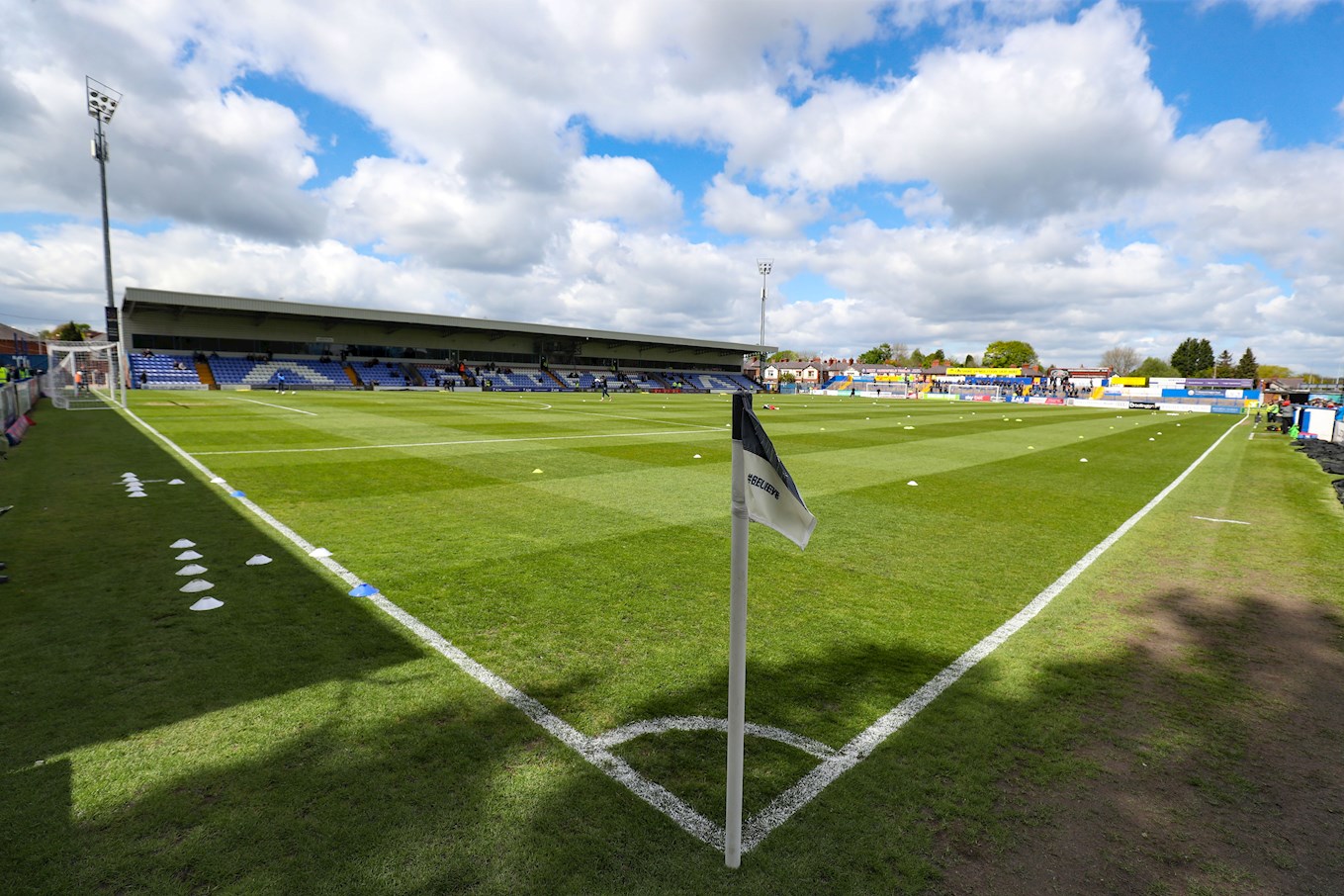 Despite being the home of the Silkmen, the stadium's first taste of Football League action was when Chester City played home games there during relocation. Although being used by Chester in the Football League, Macclesfield were denied entry in 1995 following winning the Conference due to stadium requirements. Two years later Macc again won the Conference title and this time the ground met the requirements to be promoted.

Danny Whitaker is currently the man in the dugout for Macclesfield. Whitaker is still Caretaker Manager, a role he has had at Moss Rose three times.

The 39-year-old took temporary charge while still on the books as a player in 2018 until Sol Campbell was appointed as boss. He carried on to be an important player under Campbell and scored three goals that helped the club to safety in the 2018-19 season.

Whitaker then announced his retirement from football but it wasn't long until he was back in the dugout; following Campbell's resignation he was reinstated as caretaker prior to Daryl McMahon taking charge. McMahon also resigned on the 3rd of January this year leaving Whitaker to once again step in as caretaker manager and help his beloved club.

Whitaker turned out for Oldham Athletic between 2008 and 2010 making 80 league appearances before departing to Chesterfield. 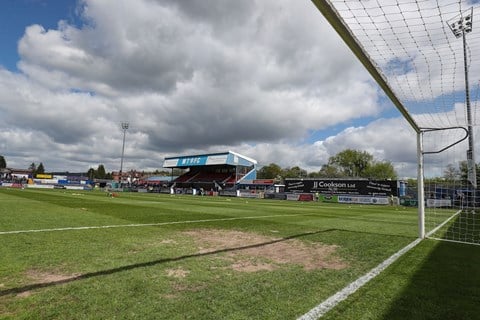 Joe Ironside’s last-minute penalty ruled out Jonny Smith’s late goal as both sides settled for a point at Moss Rose.

After a quiet start to the game, Macclesfield nearly broke the deadlock in the 17th minute as a ball was played over the top to Ironside and he slotted the ball inside to Arthur Gnahoua and he was clean through, but he had a poor first touch before Gary Woods came out to deny the forward.

Latics’ best chance of the first half came when a free-kick from the halfway line found debutant Carl Piergianni inside the 18-yard box and he headed back across goal which resulted in a defender heading behind for a corner. The resulting corner landed at the Mohamad Sylla and his volley nearly dipped into the top corner, but the strike landed on the roof of Reice Charles-Cook’s net.

Moments later, Danny Whitaker’s side came close again as Gnahoua dribbled with the ball before cutting inside from the left and he released a strike on goal, but his effort smashed the post.

Just before the interval, a combination of Woods and Tom Hamer kept the scoreline goalless as Corey O’Keeffe found room inside the area, but the goalkeeper and right-back managed to block his attempt which was heading goalwards.

After half time, Oldham started brightly as Smith ran at the hosts’ defence before unleashing a low strike which cannoned off the post.

Dino Maamria’s side continued this dominant spell and from a corner, Hamer found himself free yards away from goal, but he couldn’t keep his shot down.

Latics took the lead in the 83rd minute as from a short corner Smith cut inside and his powerful strike was too strong for Charles-Cook and the visitors had the lead.

But in the 89th minute, Macclesfield attacked and had a header cleared off the line by David Wheater. Oldham thought they had got rid of the danger, however, the referee adjudged the centre-half the use of his hand and pointed to the spot, also showing Wheater a straight red card. Ironside stepped up and sent Woods the wrong way to rescue his side a point before the 10-men of Oldham saw out the eight minutes of stoppage time.

Pay on the day will be available for Oldham Athletic’s trip to Macclesfield Town tomorrow.

The tickets went straight to general sale as a result of the hosts sending the tickets late due to the festive period.

A total of 549 have been sold prior to the fixture.

There is no price increase on the day so admission remains as:

Season Card Holders can purchase coach travel with 10% off either online or at the Ticket Office. 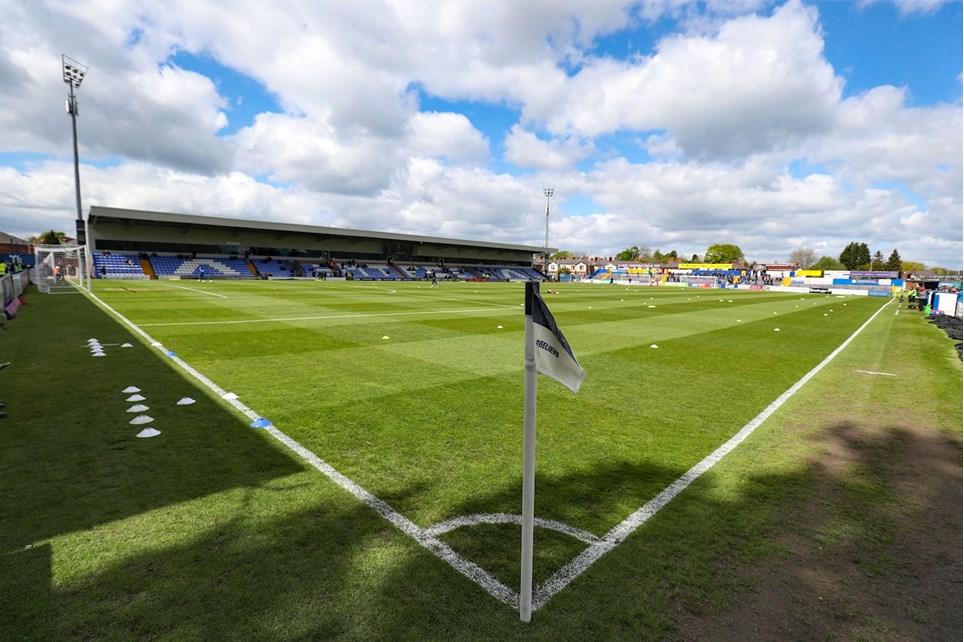 
Tickets for Oldham Athletic’s trip to Macclesfield Town are still on general sale. 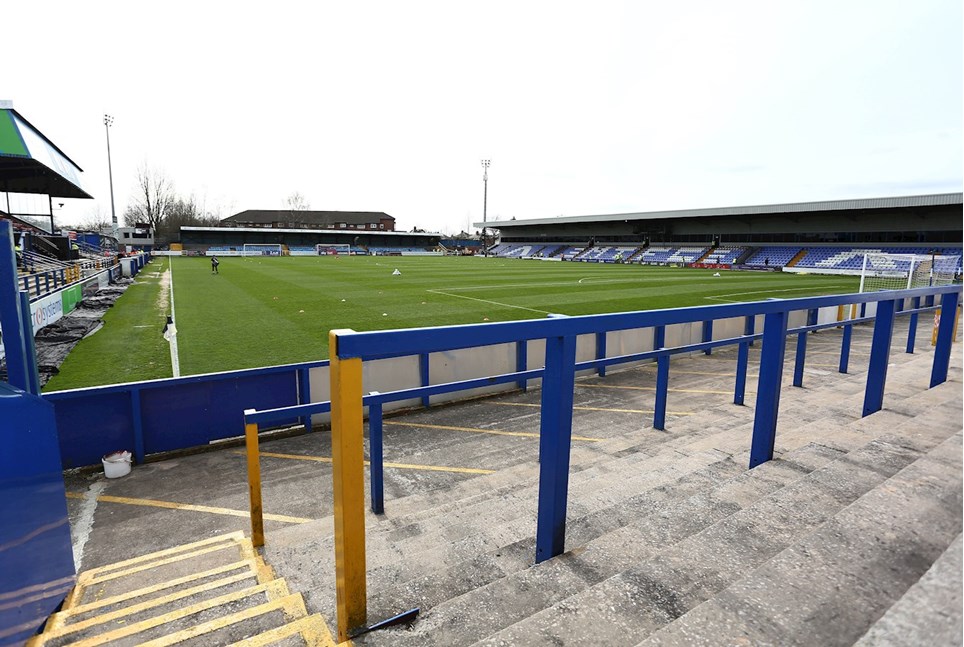 AWAY TICKET NEWS: Tickets On Sale For Macclesfield Trip