Latics travel to Fleetwood for their final game of the Leasing.com group stage knowing that a win would see them safely into the next round of the competition.

Oldham go into the game a point higher than their opposition after a 3-2 win against Liverpool U21 and a 3-0 defeat to Accrington Stanley.

The hosts have enjoyed a great start to the season and are currently fifth in Sky Bet League One under the stewardship of Joey Barton.

Latics increased their unbeaten run to four games on Sunday as they overcame Gateshead 2-1 in the first round of the Emirates FA Cup.

Fleetwood’s recent form is mixed and it has seen them win three of their last six games in all competitions.

Latics have won five out of the nine encounters between the two sides including this League One fixture in 2017:

Fleetwood lost their first away game since November when they came to Boundary Park for the League One clash.

A 25th minute own goal by Nathan Pond put Latics in front before Lee Erwin doubled the lead after the interval to make sure Athletic secured all three points.

Fleetwood are currently a point lower than Latics in the group and both sides know that victory in 90 minutes or via a shootout will see them progress into the next stage.

Fleetwood kicked off their Leasing.com campaign with a 2-1 defeat away at fellow league side Accrington Stanley. They then drew with Liverpool U21s at Highbury Stadium but picked up a bonus point after they were victorious in the penalty shootout.

Dino Maamria: "We were always going to go strong. I knew we had a big week, this week. We came through Sunday with a win and we knew we have another tough one against Fleetwood.

"It's a cup competition again and we've got to win to go through to the next round. My thoughts were always to go with a strong team.

"We're in a good place at the minute and want to create a little bit of momentum going forward. We want to make sure we get through November and attack December on a positive note.

"December is a big month for us and I've got to make sure I'm picking the best team possible to win every game that we can."

Ex-Oldham Athletic Captain, Peter Clarke was interviewed by his current side Fleetwood: "They’ve changed from my time there, looking back twelve months ago we had a really capable squad, a strong squad.

"Through the course of the season for whatever reason players moved on or weren’t available.

"Even since the end of the last campaign there’s been a lot of outgoings and similar in terms of the incomings.

"Personally, I don’t know all of the players that they’ve got there, they’ll certainly pose threats up front and in the wide areas but we’ve got threats of our own that well be aiming to utilise and give ourselves the best chance."

Paddy Madden – The Fleetwood frontman has been in fine form this season, netting ten goals in 15 appearances.

The Dublin born striker joined the Cod Army in January 2018 for an undisclosed fee from Scunthorpe United where he scored 60 goals for the club, making him their 10th most prolific player.

He initially joined on a two-and-half-year deal but as a result of his impressive displays at the Highbury Stadium, earned himself a new three-year deal in May 2019.

He has been a success in Fleetwood and so far, has notched 31 league goals in 79 league appearances.

Fleetwood Town’s home ground is named Highbury Stadium which was first opened in 1939 and was redeveloped in 2011 as part of the rise through the football pyramid.

With a capacity of just 5,327, their ground is the 112th largest capacity stadium in England. 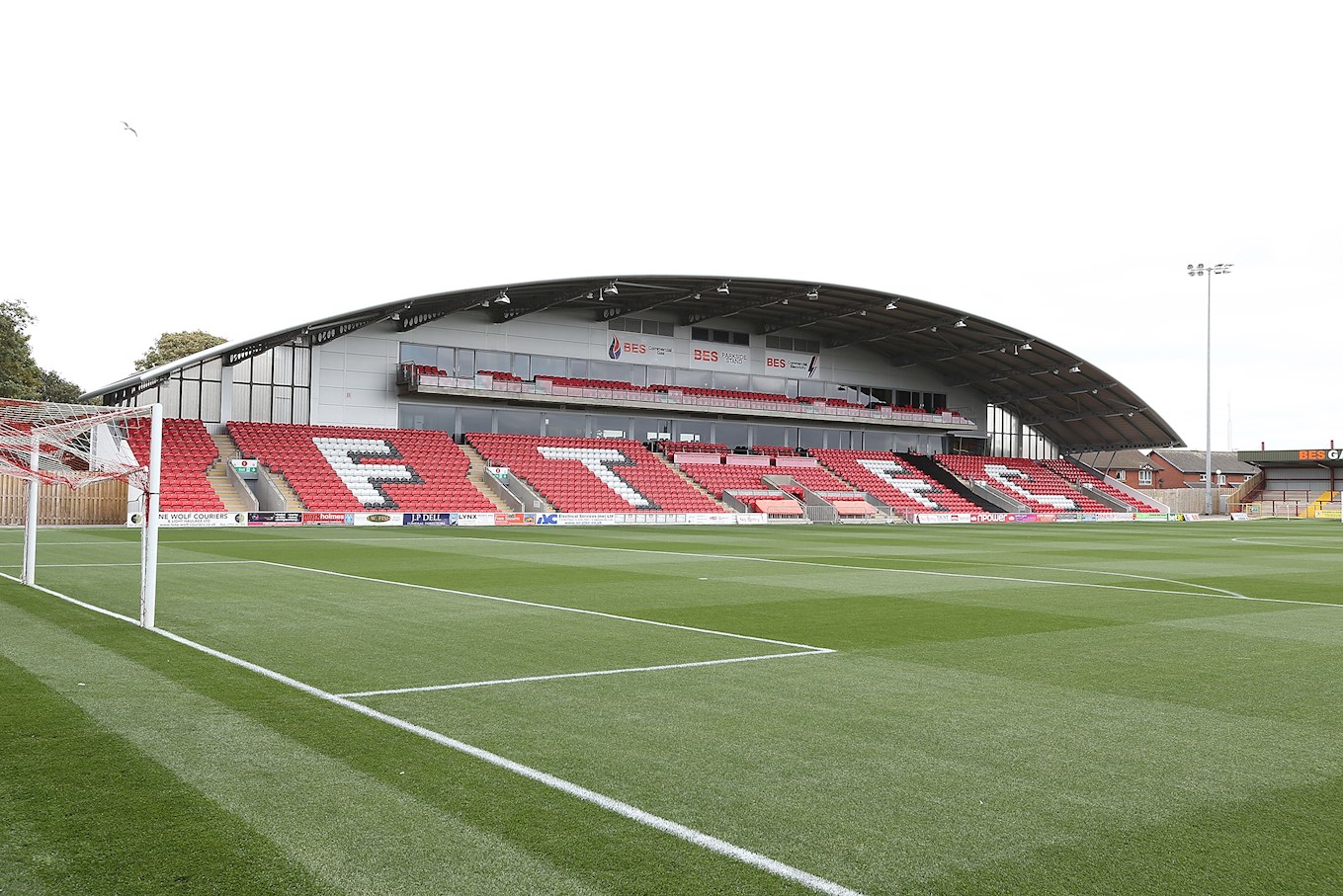 The ground has hosted Fleetwood footballing teams since its opening and has also hosted the Fleetwood flyers (speedway) and Blackpool FC reserves.

In the dugout for Fleetwood is former England international Joey Barton.

The ex-Newcastle United midfielder secured his first job in management prior to the 2018/19 season taking over the reins at the Highbury Stadium.

The 37-year-old who won one cap for the England national team enjoyed a fairly successful first season in management securing an 11th placed finish in League One.

John Sheridan, currently of Chesterfield has had spells in the dugout of both of these sides and it was at Oldham where Sheridan started his career in management when he took caretaker charge in 2003.

Sheridan was then appointed boss of Latics in 2006 where he guided them to sixth place in League One in the 2006/07 season.

He would leave in 2009 but return for a second spell as boss in 2016. In his second spell with Latics, he then departed for Notts County before returning to Boundary Park on the 12th January 2017. 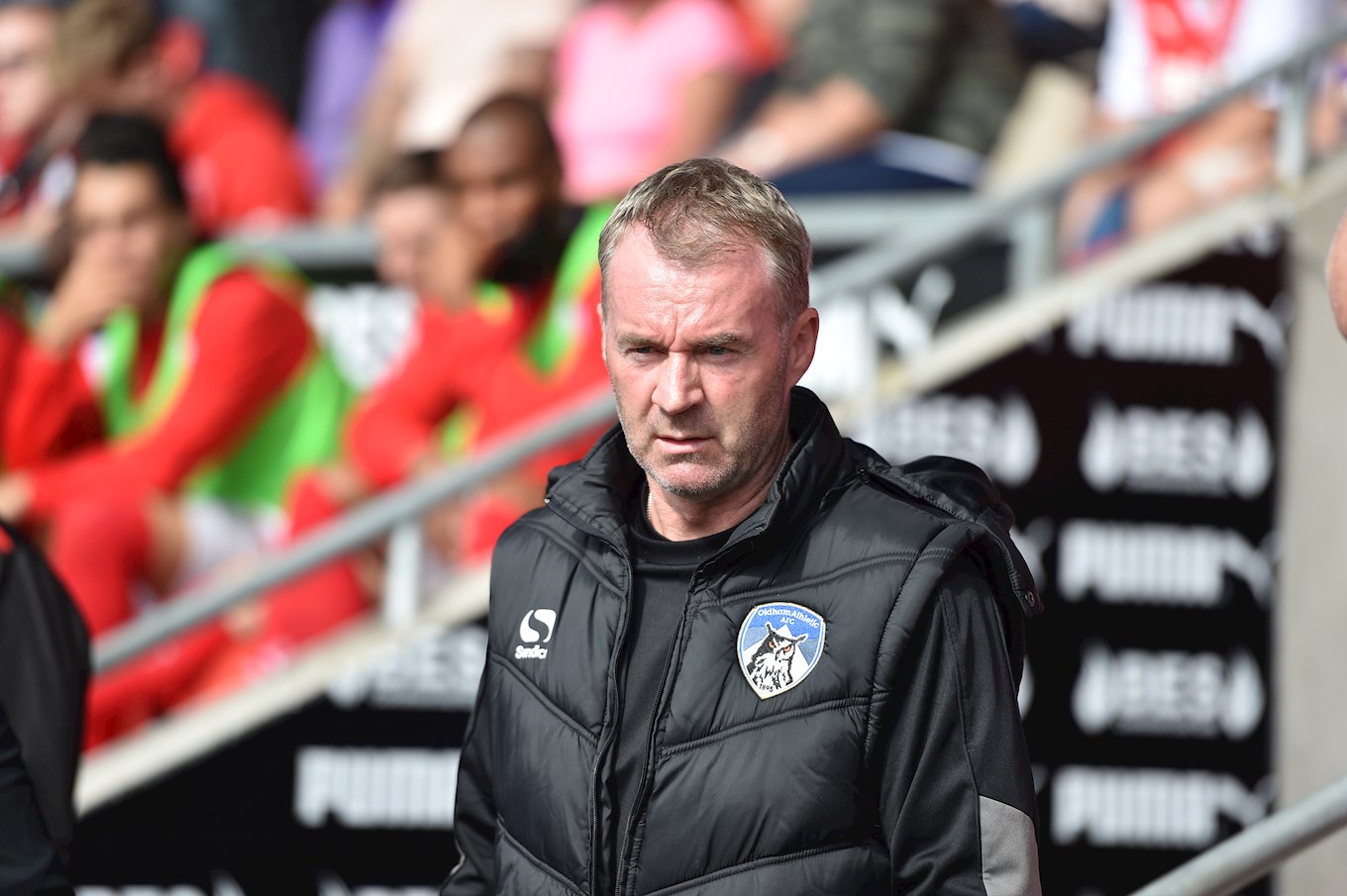 In February 2018, Sheridan was appointed manager of Fleetwood Town until the end of the season to help stabilise them.

Current Fleetwood Town defender Peter Clarke joined the Fishermen following his release from Latics at the end of last season.

The 37-year-old joined Athletic from Bury and went on to make 107 league appearances for Latics.

He had a successful time with Oldham Athletic and was named player of the season in his last season with the club.

The Southport born defender started his career at Everton and went on to play for Blackpool, Port Vale, Coventry City, Southend United, Huddersfield Town and Bury before linking up with Oldham and then Fleetwood.

He was capped eight times at England U21 level and was a fans favourite whilst at Boundary Park.

Live commentary is available on iFollow Latics with Matt Clayton and Roy Butterworth who will be talking you through the match with on-screen graphics for those who purchase the match pass.

The iFollow match pass is in both the UK and overseas at the cost of just £10.

To purchase a match pass for tonight’s fixture, click here. 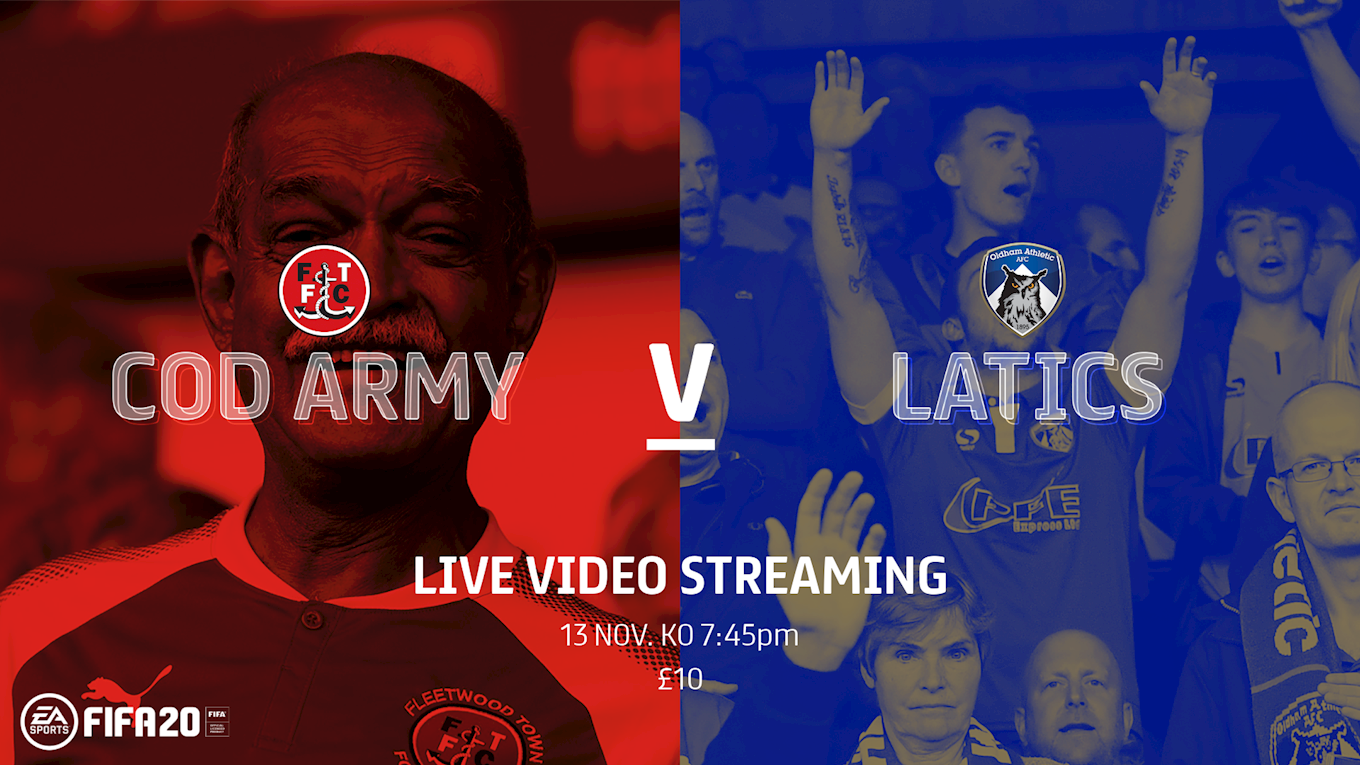 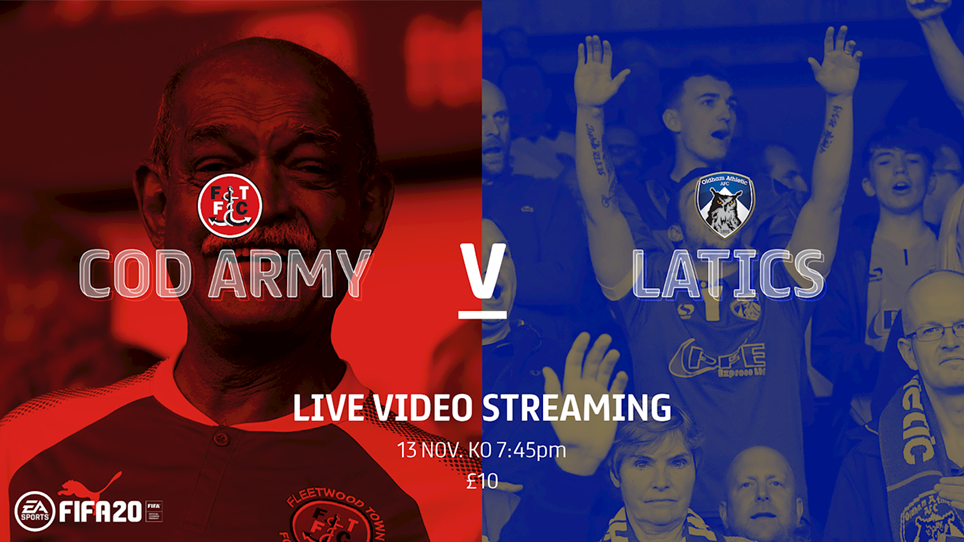 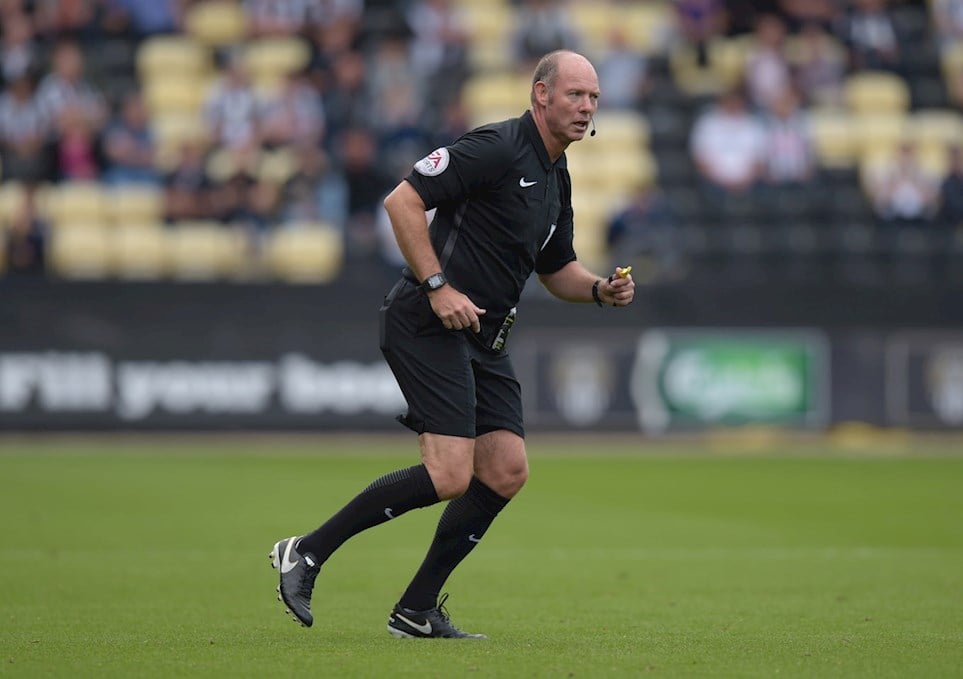 
Andy Haines will be the man in charge tonight when Oldham Athletic travel to Fleetwood Town in the final group game of the Leasing.com Trophy (7:45pm KO).

Oldham were knocked out of the Leasing.com Trophy at the group stage as Fleetwood recorded a comfortable and impressive 5-2 victory to take second place.

Dino Maamria handed 15-year-old striker Zak Emmerson his first start in a Latics shirt whilst giving Chris McCann the armband again as he fielded a strong team despite the injuries to a few of his squad.

Whilst Joey Barton made eight changes to his team, giving Peter Clarke the captaincy in his first game against Oldham since leaving in the summer.

In a ‘winner takes all’ tie it was the Cod Army who came out of the traps scoring three goals in 13 minutes with Fleetwood dominating the opening stages.

The first goal came from Peter Clarke who comfortably headed in his effort, as he was unchallenged in the area as the corner drifted in from the right.

The second came with the next attack as Morris tapped in from close range, entering the box and running onto the pass that was placed perfectly from the right.

The crowd at the Highbury Stadium would have another goal to celebrate after De la Paz prevented Madden with an instinctive save.

Jack Sowerby was given the ball on the edge of the box, but before a challenge came in he placed a powerful effort across goal that flew into the bottom corner.

With things not looking good for Latics, Jonny Smith who was in fine form, added his third of the season with a superb strike on the 25th minute mark.

Receiving the ball in space on his left wing, the on-loan winger didn’t think twice before unleashing a shot that flew in over the head of Fleetwood keeper Cairns.

After the frantic start the game calmed down before Barton’s side added a fourth.

Losing the ball in midfield, Oldham were caught out with a quick attack by the hosts. Madden threaded a superb pass into the path of Wes Burns who slotted it in underneath the body of De la Paz.

The opening 45 ended with Iacovitti’s effort being tipped over the crossbar.

As a result two changes were made at the interval with Morais and Eagles making way for Maouche and Wilson.

Wilson was immediately introduced into the action, getting to the by-line he cannoned his shot against the near post.

But Fleetwood would add a fifth six minutes in. The prolific striker Paddy Madden was given the ball on the right, accepting the offer and placing it in the goal, as the Latics defence couldn’t stop the pass across inside the area.

As Town looked for a sixth, Dempsey first skimmed the crossbar from a short corner routine on the hour mark before De la Paz prevented Morris with a great one-on-one double save.

The hosts kept coming forwards but wasted a number of chances, the most notable coming through Madden who only from a few yards out headed wide at the back post unmarked on 68 minutes.

Oldham would get their second of the evening with twenty minutes remaining. Substitute Azankpo bundled the ball over the line after a scramble in the area saw Iacovitti’s blocked shot fall into the path of the Benin internationals path.

The Latics keeper would pull off another save in the closing stages as Burns’ effort was rifled into the body of Zeus who parried the effort away.


Andy Haines will be the man in charge tonight when Oldham Athletic travel to Fleetwood Town in the final group game of the Leasing.com Trophy (7:45pm KO).

Oldham Athletic travel to the Highbury Stadium in the final Leasing.com Trophy Northern Group B game on Wednesday 13 November.

The winner of the fixture will progress out of the group along with Accrington Stanley.