Oldham Athletic are back at Boundary Park and looking for a response when they take on Macclesfield Town in the Sky Bet League Two fixture tomorrow (3pm).

Latics come into the game after a disappointing showing at Mansfield Town, but Head Coach Dino Maamria is confident his side can bounce back.

"Macclesfield have started the season brilliantly. I know they favour a back three system and they're rigid with it.

"They've not had many injuries to hamper them and they are definitely not the Macclesfield of last season.

"They are solid, and they've got players who can really make a difference to a game. We will need to be at our absolute best on Saturday, and we need to bounce back in front of our own fans."

Maamria may have a few selection headaches for this fixture though.

Tomas Egert and Filipe Morais will both start their suspensions and Dylan Fage is ruled out due to the concussion protocol.

Zak Mills and Mohammed Maouche are both doubts and Johan Branger-Engone will be missing once again with a thigh injury.

However, Zeus de la Paz and Desire Segbe Azankpo both return after being on international duty.

The visitors Macclesfield come into the game having narrowly avoided relegation last season.

They currently sit 12th in the table, just four points off the playoffs after a decent opening quarter to their campaign.

However, they are going through their own transition period with Sol Campbell being replaced in the hotseat by Daryl McMahon.

They come to Boundary Park off the back of a 2-1 victory against Port Vale last weekend and on a three-game unbeaten run.

Last time the two sides met, the Silkmen ran out 2-1 winners at the Moss Rose stadium where Urko Vera grabbed the only goal for Latics from the spot.

However, last season’s game at Boundary Park finished 3-1 to Oldham thanks to goals from Sam Surridge, Johan Branger-Engone and Ishmael Miller.

Oldham Athletic are priced at 6/5 to beat Macclesfield Town tomorrow.

The Fans Bar is once again open where you can buy pie, peas and gravy alongside a drink voucher (soft, Peroni or Budweiser) for just £5.

Other popular alcohol beverages are also available on draft.

And for the first time this season in the Main Stand, Donkeystone cask ale will be on sale. 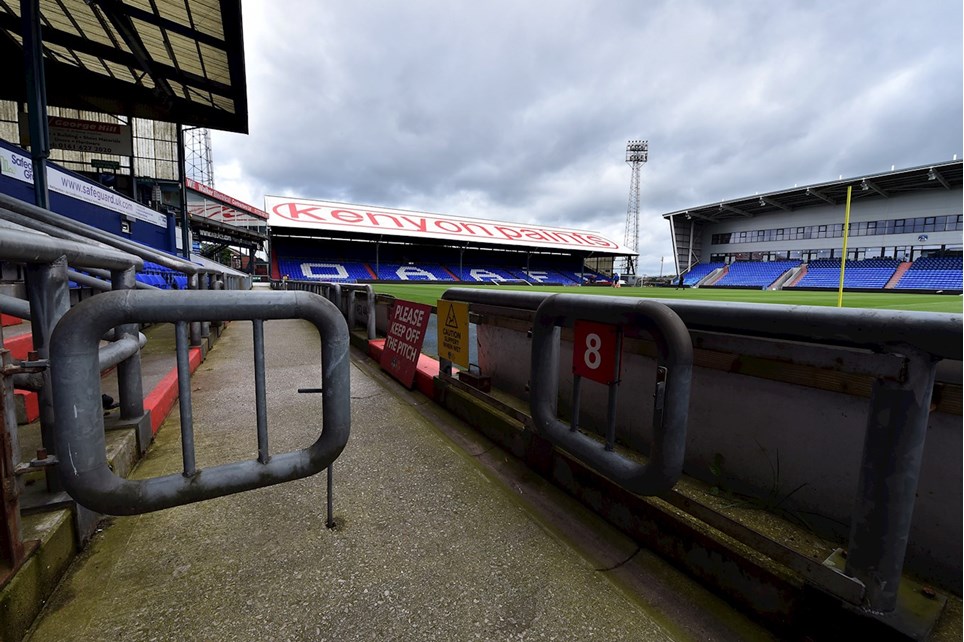 
Anthony Backhouse will be the man in charge when Oldham Athletic take on Macclesfield Town on Saturday at Boundary Park (3pm).

Oldham Athletic were beaten 1-0 by Macclesfield Town at Boundary Park in a frustrating clash for the hosts.

After a quiet opening 20 minutes, Macclesfield Town won a corner and the delivery was met by the head of Theo Vassell but the former Oldham man couldn’t direct his header on target.

Moments later, there was a stoppage in play after a neat piece of play by the visitors ended up in the Latics area and Connor Kirby accidentally caught Zeus De La Paz in the face with his studs.

The first half lacked any clear-cut chances for either side, but the possession was controlled by Daryl McMahon’s side.

The closest Latics came to a chance was just before the interval as Mohammed Maouche laid the ball to Tom Hamer and tried his luck from distance but it went way past the post.

Shortly into the second half, Dino Maamria’s side came close to breaking the deadlock when Jonny Smith’s free-kick was flicked on to Maouche but he blasted his effort just wide of the post.

Macclesfield began to apply pressure and were nearly rewarded with an opening when Miles Welch-Hayes cross into the box was cleared and fell to the edge of the box and landed to Corey O’Keefe, but he was closed down before he could get a strike on goal.

In the 69th minute, it was a proud moment for Lewis McKinney who replaced Maouche for his professional debut.

This was followed by a snap-shot from range by Theo Archibald but De La Paz had the effort covered and watched it go past his post.

Archibald came close again just minutes later as he got onto the end of a Joe Ironside cross, but his strike went way over the bar.

Oldham managed to win a corner it fell nicely for captain David Wheater, but he couldn’t keep his effort down.

It was that man again who came close as Smith’s free-kick landed on Wheater’s head but Owen Evans just about managed to keep him out.

In the 87th minute, Macclesfield took the lead as Mohamad Sylla gave a free-kick away on the edge of the area and substitute Jack McCourt stepped up and blasted pass De La Paz into the far corner.

Latics thought they had found an equaliser with 90 minutes on the clock as a blue shirt headed towards goal from a corner but a Macclesfield player managed to clear the ball off the line and the danger was eventually cleared.


Anthony Backhouse will be the man in charge when Oldham Athletic take on Macclesfield Town on Saturday at Boundary Park (3pm).