Oldham Athletic are back in action tomorrow as they take on Grimsby Town at Boundary Park in the Sky Bet League Two fixture (3pm).

Last weekend, Latics picked up a point away against Plymouth Argyle in a 2-2 draw.

Johan Branger-Engone gave Latics the lead, but goals from Scott Wootton and Joel Grant put the Pilgrims ahead.

David Wheater came to the rescue for Oldham in the 77th minute with a header to equalise.

Head Coach Laurent Banide admits that Grimsby Town will be a tough test but remains focused on his own side.

"To be honest I just want to focus on my own team, I've seen Grimsby play in the last two games and they're a good team and play nice football." He said.

“They'll be a difficult opponent, but we have confidence that we can beat them, and we have been working hard."

Centre-back Tomas Egert is still a few weeks away from full match sharpness, whilst forward Marvin Kokos remains sidelined with an injury.

During the week, the Mariners drew 0-0 with Macclesfield Town but won 5-4 on penalties in the Carabao Cup to book a place in the third round against Chelsea.

The last time Oldham played Grimsby was on 30th March 2019 in Sky Bet League Two at Boundary Park, where Latics won 2-0 thanks to goals from Callum Lang and Chris O'Grady.

Oldham Athletic are priced at 17/10 to beat Grimsby Town. 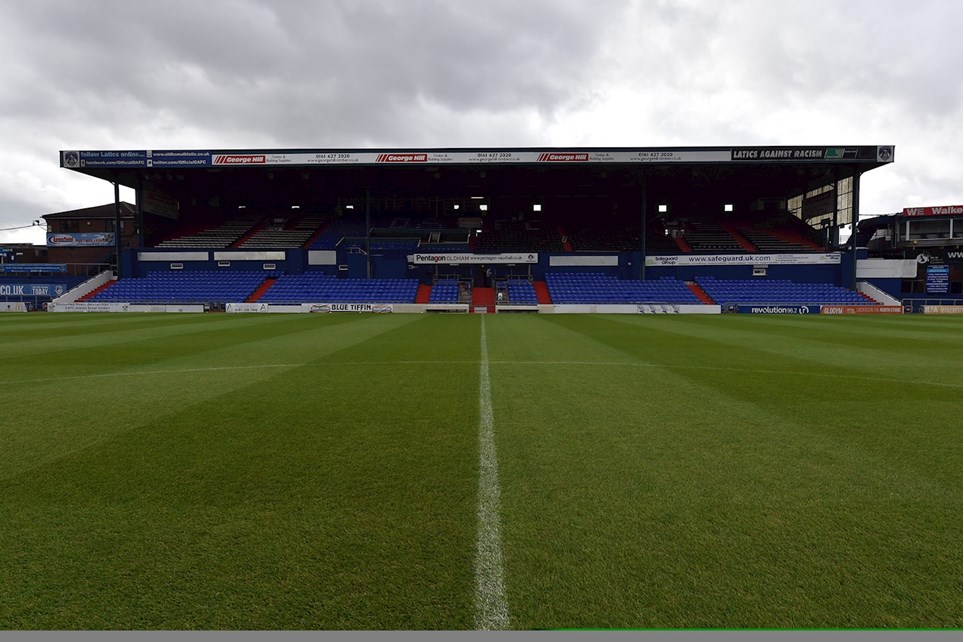 
Sam Purkiss will be the man in charge when Oldham Athletic take on Grimsby Town on Saturday at Boundary Park (3pm).

Oldham Athletic dropped two points at Boundary Park in a 2-2 draw with Grimsby Town as the visitors equalised in the 90th minute.

Goals from Christopher Missilou and Filipe Morais had given Latics a two-goal cushion, but Jordan Cook and Ludvig Ohman managed to steal a point for Grimsby.

Grimsby should have taken an early lead when Moses Ogbu raced down the right-wing before his cross was deflected to James Hanson inside the Latics penalty, but his strike went over the bar.

Shortly after, Latics came close to finding the back of the net after a looping ball into the visitors’ box fell to Christopher Missilou and he produced an overhead kick, but it went just wide of the goal.

Oldham managed to take the lead in the 19th minute as Mohammed Maouche’s corner was flicked on by Tom Hamer and landed to the feet of Missilou in the six-yard box and he slotted the ball past James McKeown.

Hanson had a header inside the Latics penalty area, but he couldn’t keep his effort down.

Just before half-time, great work down the left-wing by Filipe Morais and Missilou lead to Dylan Fage running at the Grimsby defence and he crossed to Maouche, but he couldn’t direct this attempt on target.

Moments into the second-half, Hanson nodded a ball down to Jake Hessenthaler on the edge of the box and he had a strike on goal, but it was brilliantly blocked by Latics defender David Wheater.

The Oldham captain nearly doubled his sides’ lead in the 50th minute as he towered above his marker from a cross, but his header went just wide of the Grimsby goal.

Again, great work down the left-wing by Morais resulted in him crossing into the box, it was cleared but only to Johan Branger-Engone on the edge of the box, but his strike went over the crossbar.

Latics doubled their lead in the 66th minute, Desire Segbe Azankpo delivered a great cross in from the right and it found the head of Morais and he placed his header into the bottom corner.

Gary Woods then denied Ogbu with a smart save as the forward found space for a shot at an angle, but the goalkeeper got down to save it.

Grimsby pulled a goal back in the 73rd minute when a low driven cross came into the Latics box and after Hanson miss kicked it, it fell to Jordan Cook and he slotted into the net.

Minutes later, a fantastic run by substitute Jonny Smith saw him lay the ball off to Azankpo in the penalty area, but the striker was denied by James McKeown.

The visitors should have been level as Ogbu was given a free header only yards away from goal from a corner, but the forward couldn’t keep his header down.

Grimsby found an equaliser in the 90th minute as a cross came into the box and found Ludvig Ohman and he headed past Woods to snatch his team a point.


Sam Purkiss will be the man in charge when Oldham Athletic take on Grimsby Town on Saturday at Boundary Park (3pm).