Latics are looking to make it three wins in a row when they travel to the Mazuma Stadium to take on Morecambe in Sky Bet League Two this weekend (12:30pm KO).

It was a 5-2 scoreline in the side's last outing a week ago, with the goals coming from Conor McAleny, Alfie McCalmont, Carl Piergianni and a brace from Davis Keillor-Dunn.

That backed up an impressive win before that to record back-to-back victories in the league for the first time since November, which also resulted in nine goals scored over those two games. 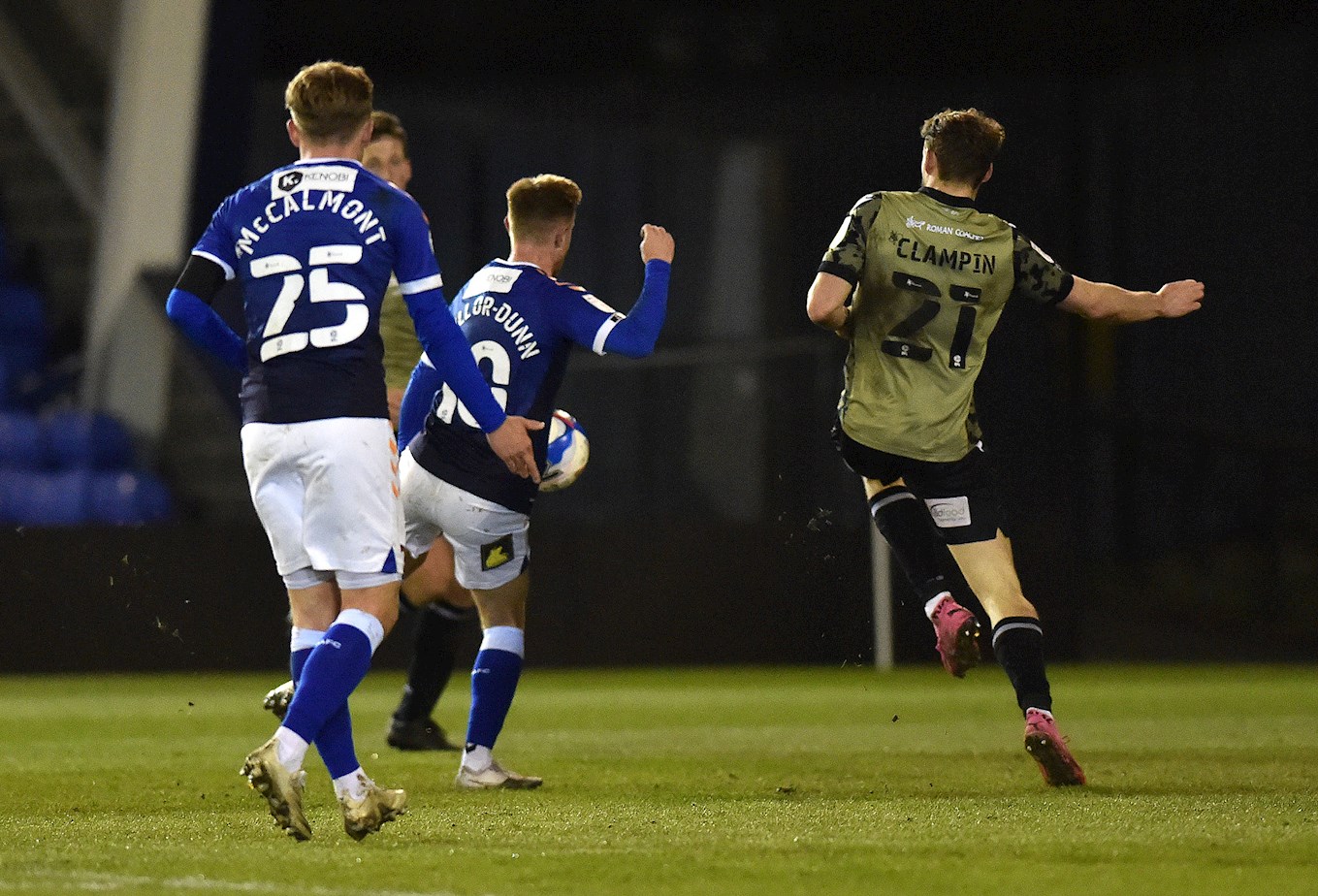 Morecambe have been one of the surprise packages of the division this season and are still in with a good chance of being promoted.

Last time out, they emphatically saw off Scunthorpe United 4-1 in the week, ending a run of three games without a win.

Like Latics, they have won three of their last six but sit fourth in the table. Just four points seperates them and a place in the automatic promotion spots.

They will know that a bad run could cost them their playoff space as the gap is just six points and a number of teams have a game in hand.

Latics have not had the best of time against Morecambe this season and have already suffered defeat at their hands twice this season.

The first game was in the second round of the Carabao Cup with Aaron Wildig scoring the only goal of the game as they set up a tie with Newcastle. The other was 3-2 at Boundary Park with Wildig, Alex Kenyon and Cole Stockton scoring whilst Conor McAleny grabbed a brace for Latics as young keeper Mackenzie Chapman was called into action from the bench at the interval.

It looks like Zak Dearnley, George Blackwood and Marcus Barnes are close to return to the side before the end of the season after time out with serious injuries.

Goalkeeper Ian Lawlor is out injured for what looks like the remainder of the campaign and it is still unclear whether Bobby Grant and Serhat Tasdemir are available for selection.

Carlos Mendes Gomes is enjoying a good season and found the back of the net in the 4-1 win over Scunthorpe. 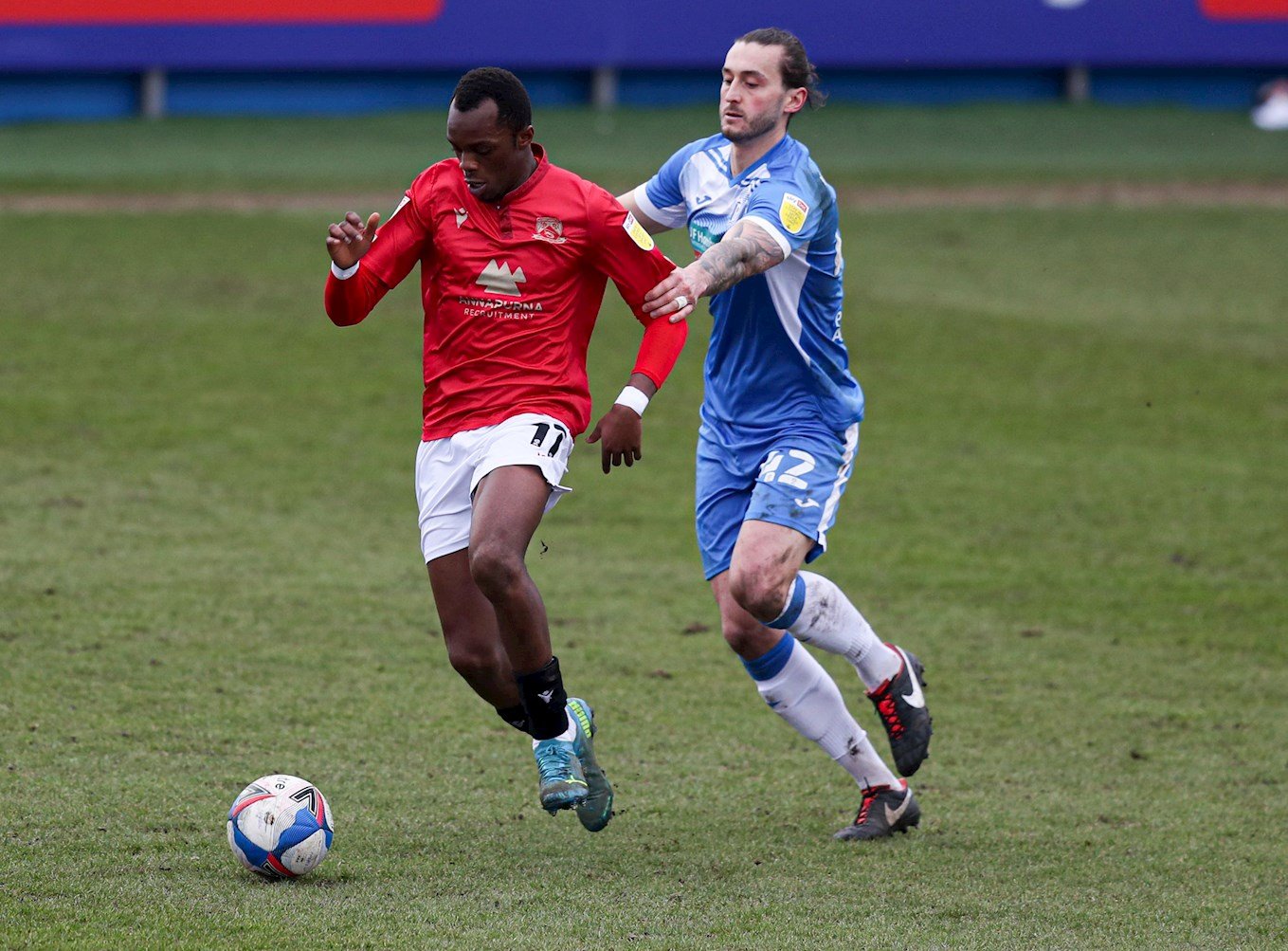 With 13 goals in 39 appearances, Gomes is Morecambe’s top scorer and the ninth highest in the division.

The 22-year-old spent time in his youth career with Spanish giants Atletico Madrid but his first taste of senior football came in a very different arena with local non-league outfit West Didsbury and Chorlton.

He was scouted by Morecambe and made the move to the professional game in 2018.

This is by far Gomes’ most productive season as 13 of his 15 Morecambe goals have come this campaign. 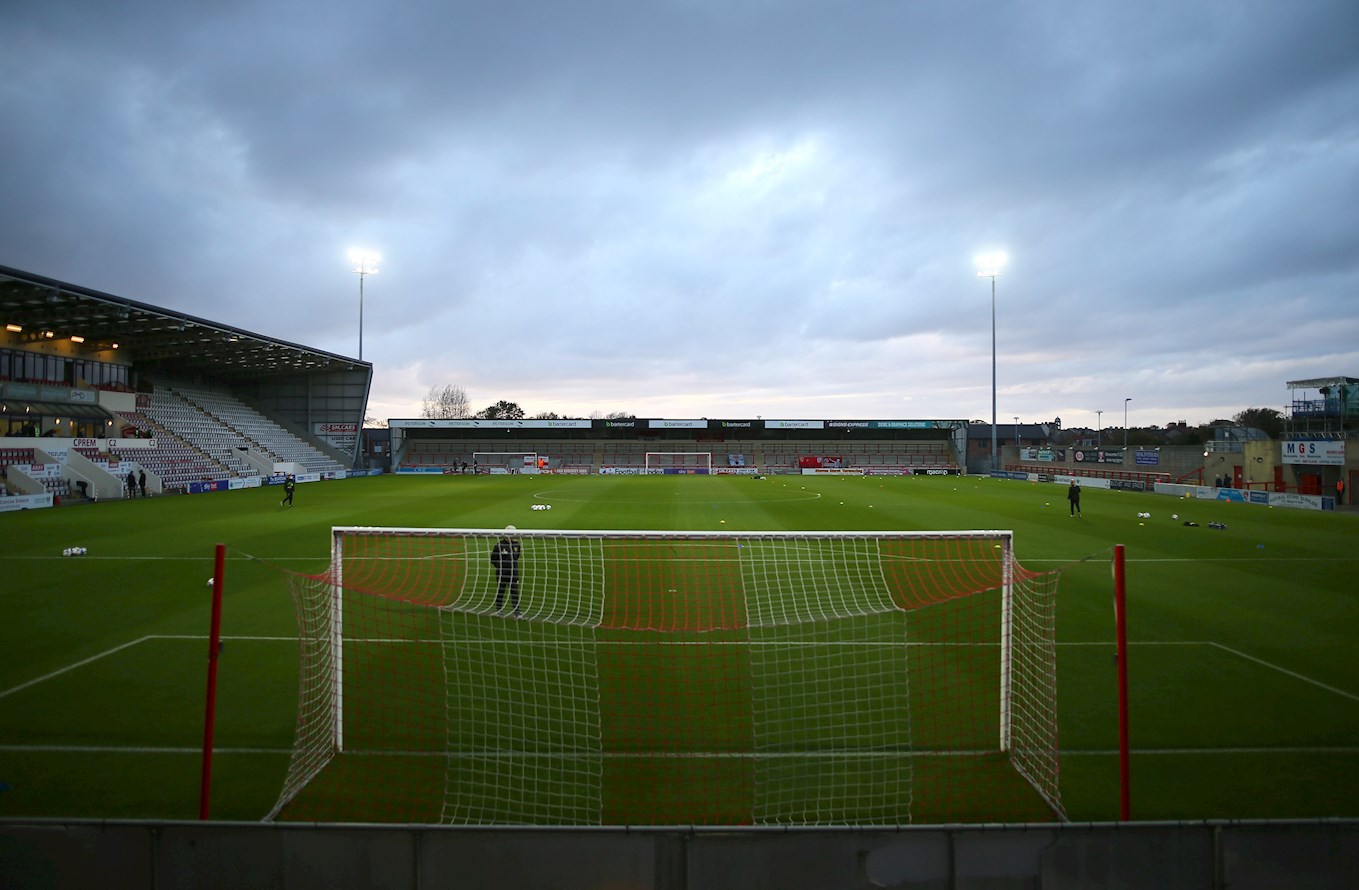 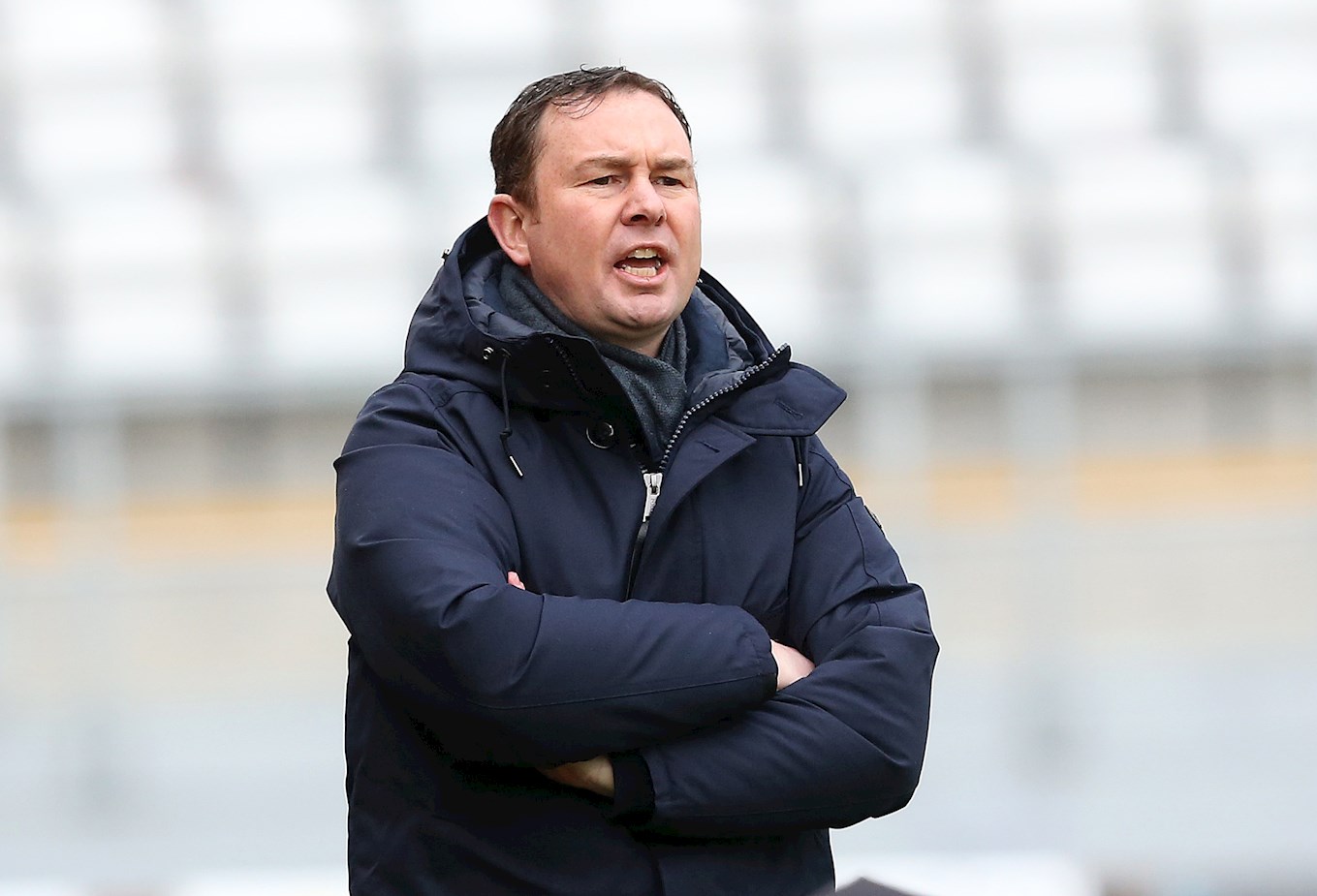 Adams took over the reins at Morecambe in November 2019 after the long-serving Jim Bentley departed the club for AFC Fylde.

He has also managed Ross County and Plymouth Argyle. At just 33-years-old, Adams did the impressive feat of leading Ross County to the Scottish Cup Final beating Celtic and Hibernian on the way.

The referee in charge is Michael Salisbury. 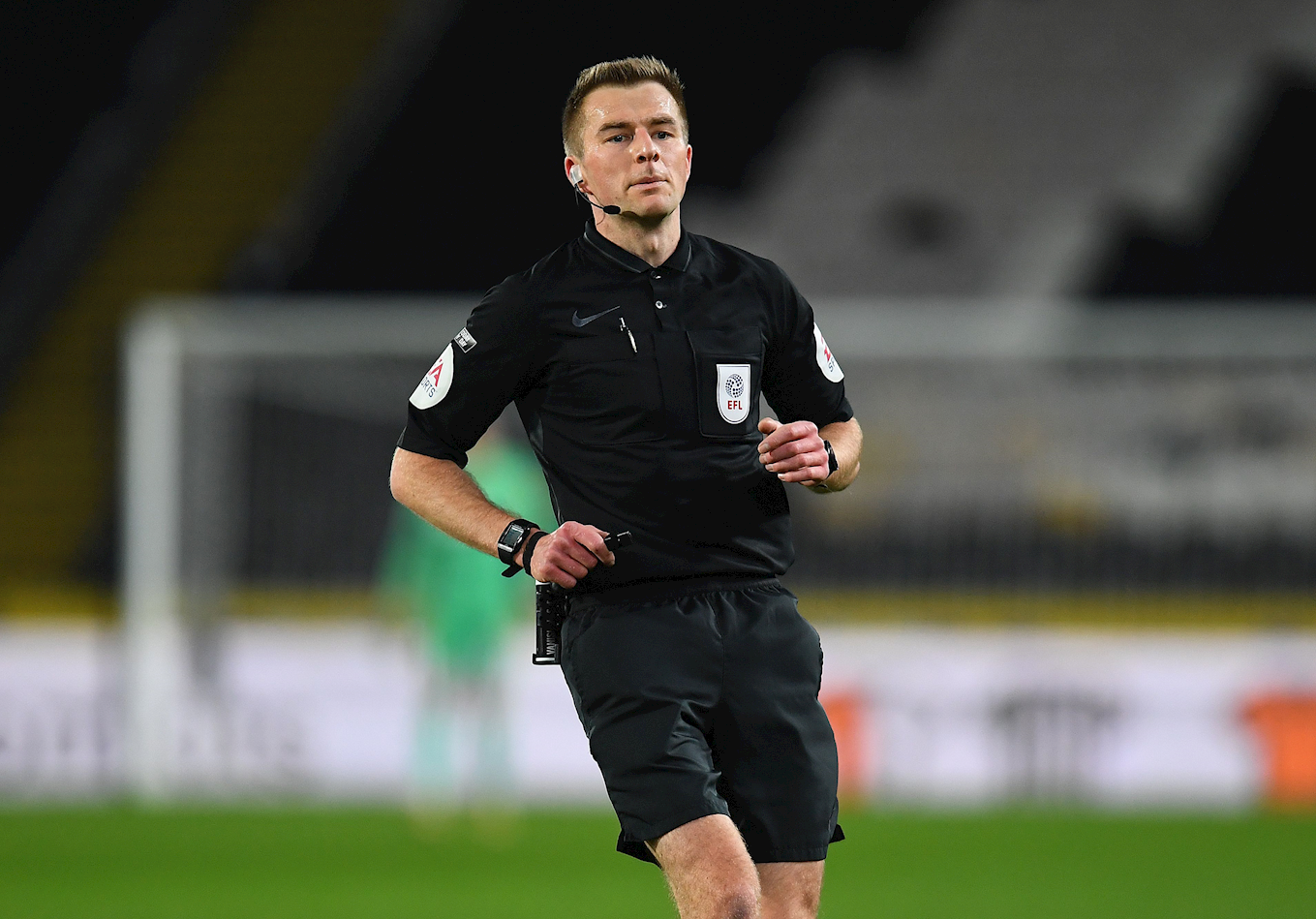 He has taken charge of 21 games in this campaign handing out 49 bookings and one red card.

The last fixture he officiated involving Latics was back in February, a 1-0 defeat at home against Barrow.

His assistants are James Wilson and Steven Meredith with Lewis Smith as the Fourth Official.

Morecambe are odds on favourites to boost their promotion chances with a win and are priced at 5/6.

Keith Curle’s men are out at 3/1 to make it three wins on the bounce whilst the draw is 5/2. 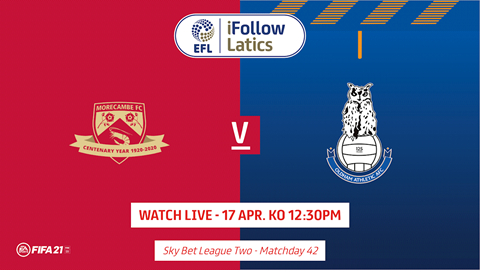 Please note there is an unusual kit clash with Morecambe's socks which are now black along with their white shorts, so the home blue shirt will be worn with the navy shorts and socks of the away kit. 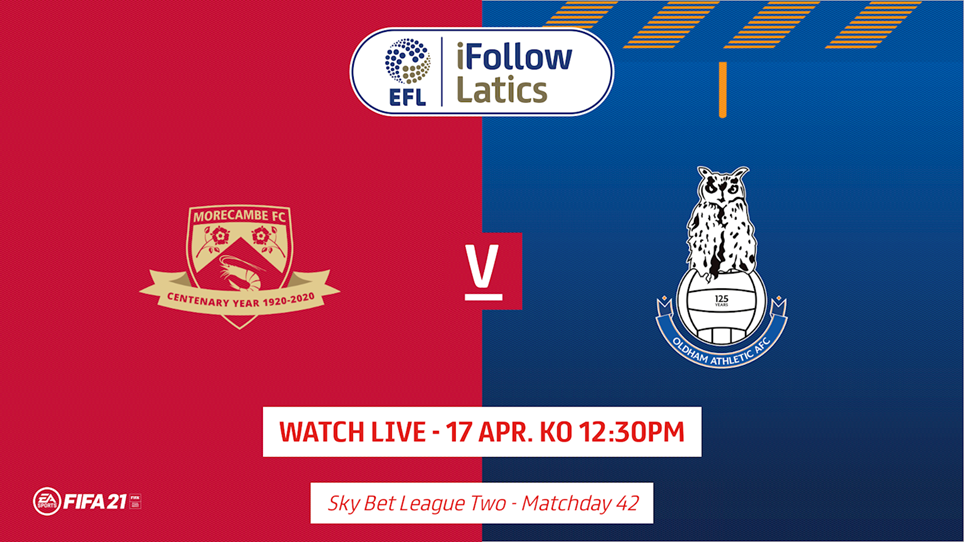 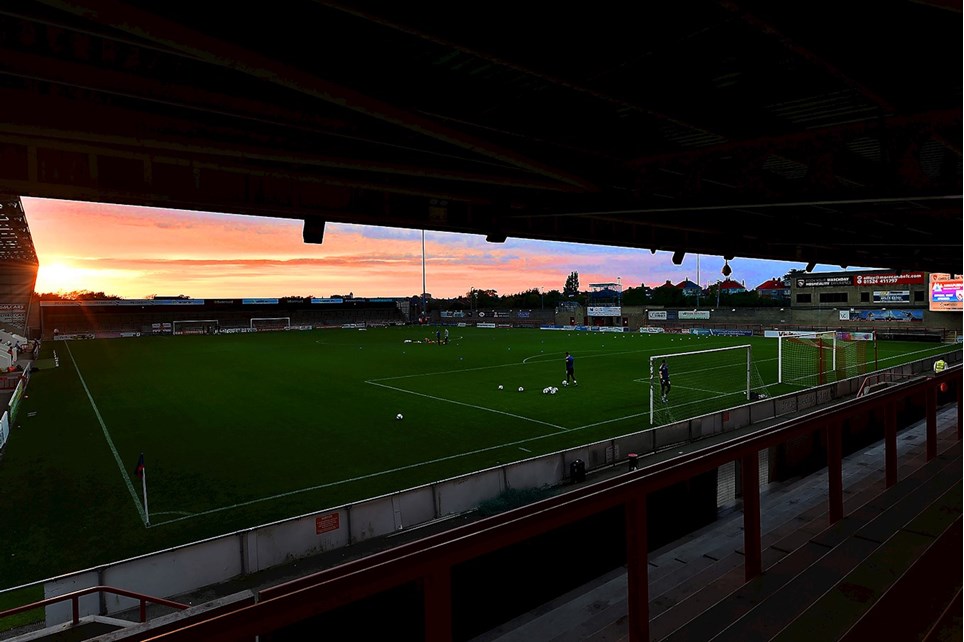 Latics nearly mount a late comeback but were left frustrated as Morecambe earn all three-points in the early kick-off.

After back-to-back emphatic victories against Crawley Town and Colchester United, Keith Curle kept his trust in his players as he named an unchanged team for the trip to promotion-chasing Morecambe.

Derek Adams’ side found themselves ahead just five minutes into the game as Kelvin Mellor floated a ball over the top of Latics’ backline which Carlos Mendes Gomes raced onto the pass and, from a tight angle, smashed into the far bottom corner.

The visitors began to get a foothold in the encounter and should’ve scored when Conor McAleny dribbled down the left-wing, beating the defender before delivering a low cross to Davis Keillor-Dunn inside the six-yard box, but the attacker was denied by former Latics trialist Kyle Letheren in the Morecambe goal.

Moments later, Dylan Bahamboula sprinted to byline before pulling it back to McAleny and he struck goalwards, however, Mellor blocked off the line to the frustration of the Latics dugout.

Morecambe should’ve doubled their advantage as Liam Gibson powered his way down the left flank and his deflected cross fell into the path of Cole Stockton, but from around the penalty spot, he slotted wide of the target.

In the 39th minute, Latics found an equaliser when Kyle Jameson produced an impressive long pass over the top to the onrushing McAleny and he kept composed to chip over the goalkeeper to notch his 20th goal of the season in all competitions.

However, the hosts restored their lead within minutes as Mendes Gomes produced fine work down the left before crossing low into the box which was met by Aaron Wildig and he steered into the bottom corner to make it two in two against Latics.

In the first-half added time, Morecambe scored another through Stockton. Wildig flicked the ball to the target man and he found room inside the box to fire past Walker and into the back of the net.

Shortly into the second interval, the Shrimps managed to make it four as Mendes Gomes got his second of the game. Former Leeds United midfielder Toumani Diagouraga had great vision to slot the attacker one-on-one with the goalkeeper and he kept his cool to place his strike into the bottom corner.

With just over ten minutes left in the game, the boys in blue pulled a goal back as substitute Nicky Adams delivered a corner into the box which eluded everyone apart from Cameron Borthwick-Jackson at the back post and the left-back tapped into the goal to give his side a bit of hope.

Latics got another with two minutes to go as, once again, Adams delivered an excellent corner, and it was met by the leaping Jameson and the central defender managed to flick his header into the far corner to gather more belief for Curle’s men.

Oldham looked to find an equaliser in the late stages, however, Morecambe managed to stand strong to earn their third win over Latics this season. 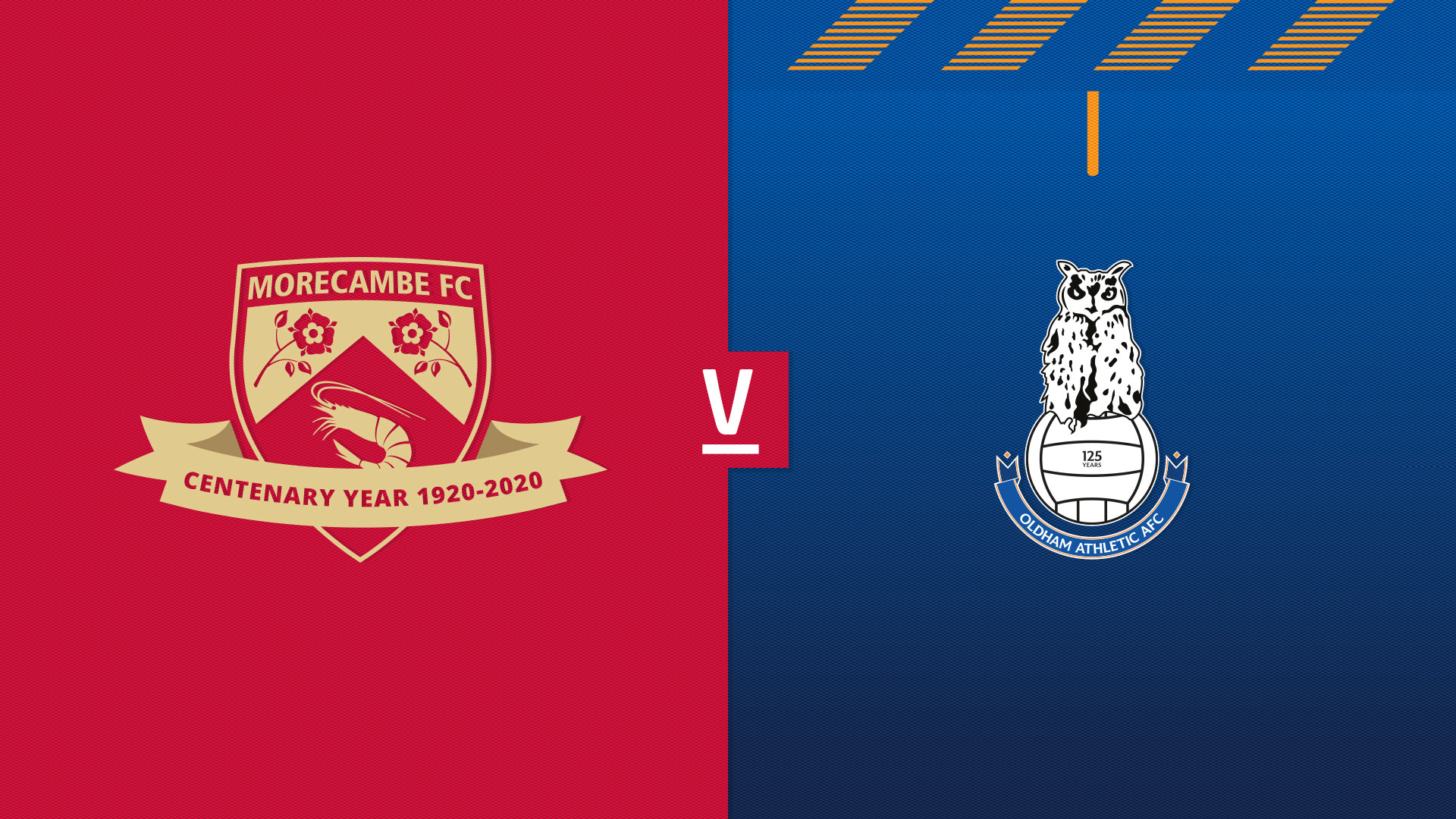 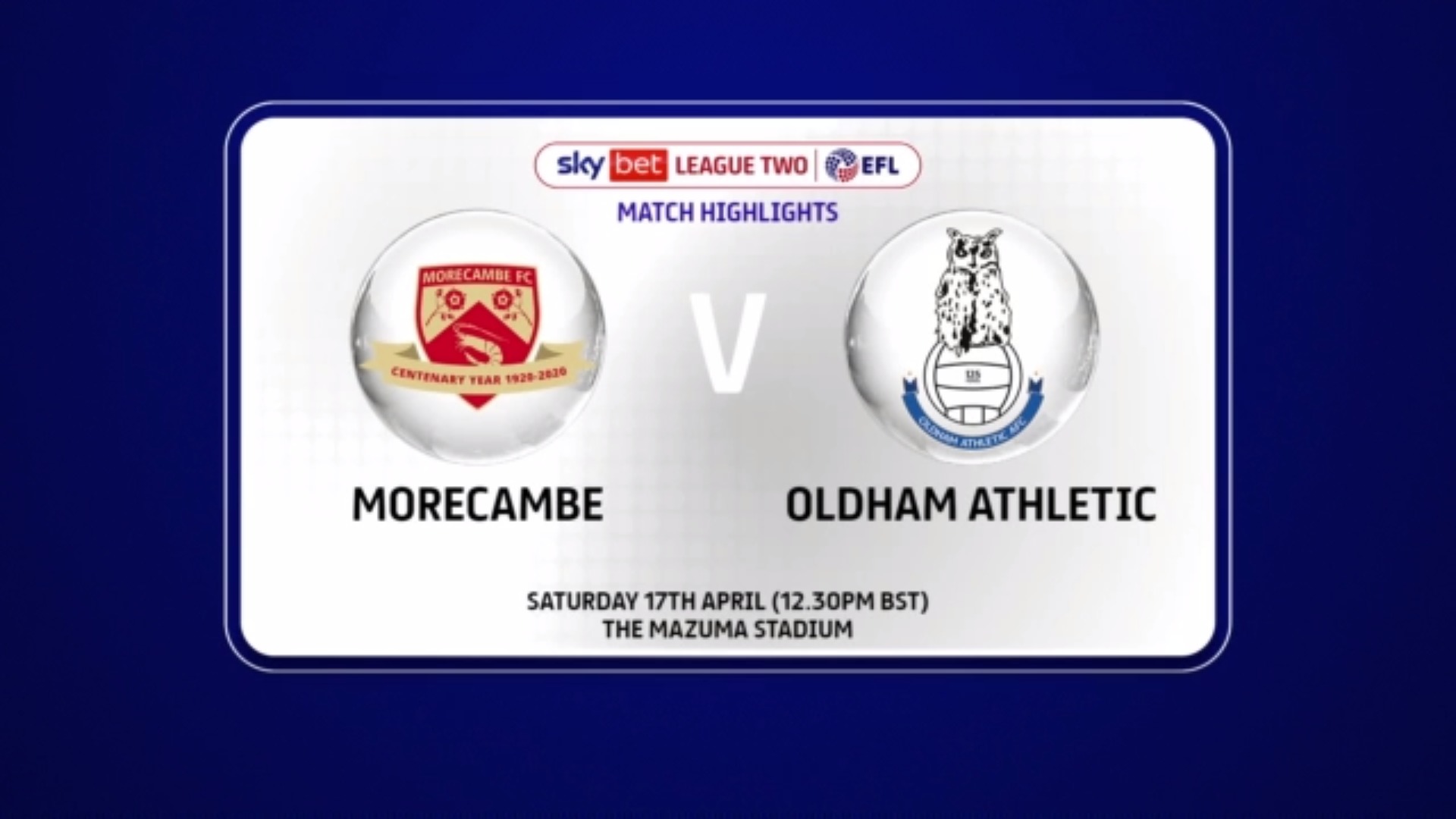 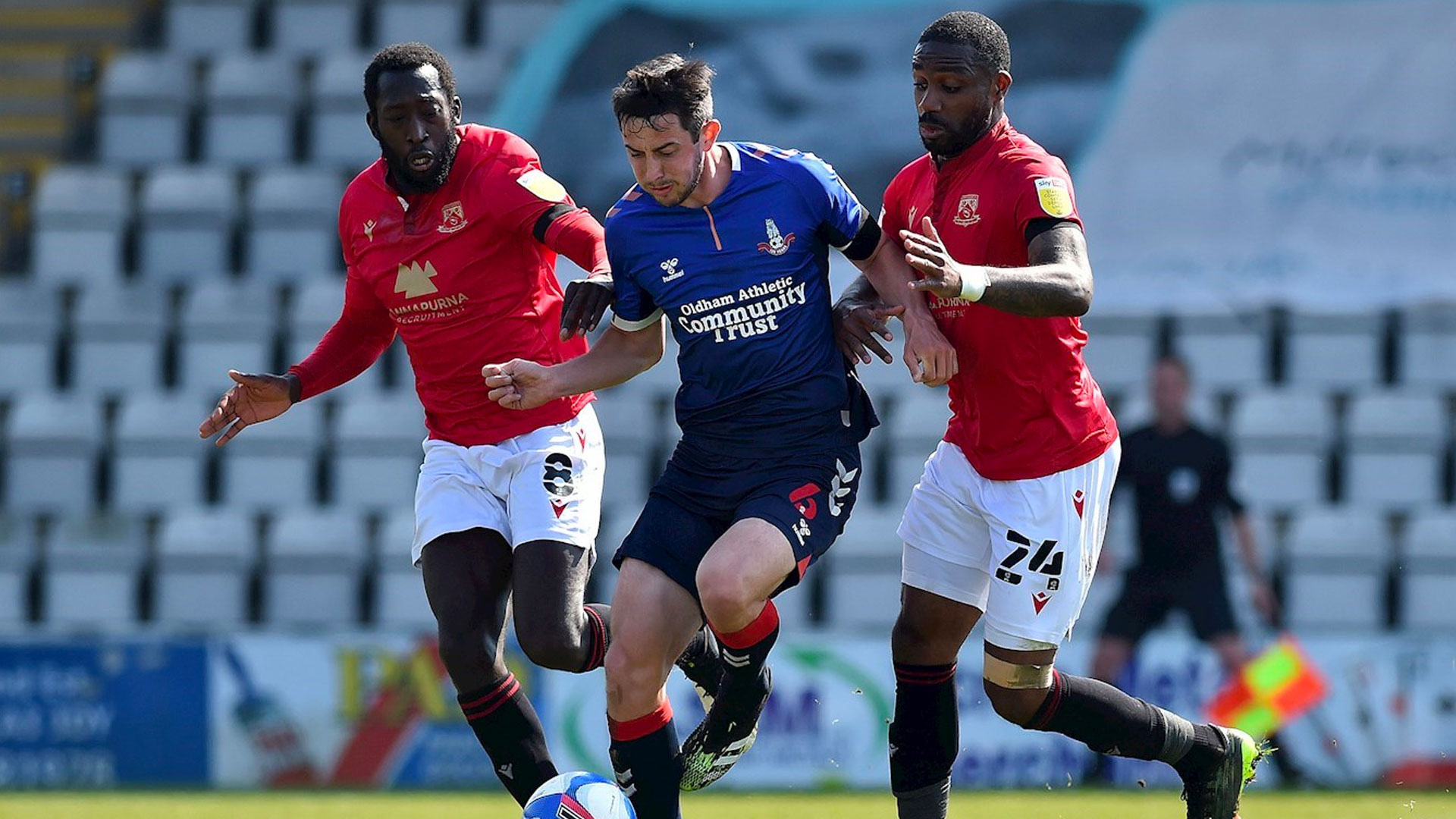