Latics are back in Sky Bet League Two action this weekend as they take on Bradford City for the third time this season.

Harry Kewell’s men go into the game in good form but lost last time out against Sunderland in the Papa John's Trophy.

Bradford City come into this clash on the back of a difficult run of form and are without a win in seven games in all competitions.

This leaves them 23rd in the League Two table and seven points worse off than Latics. 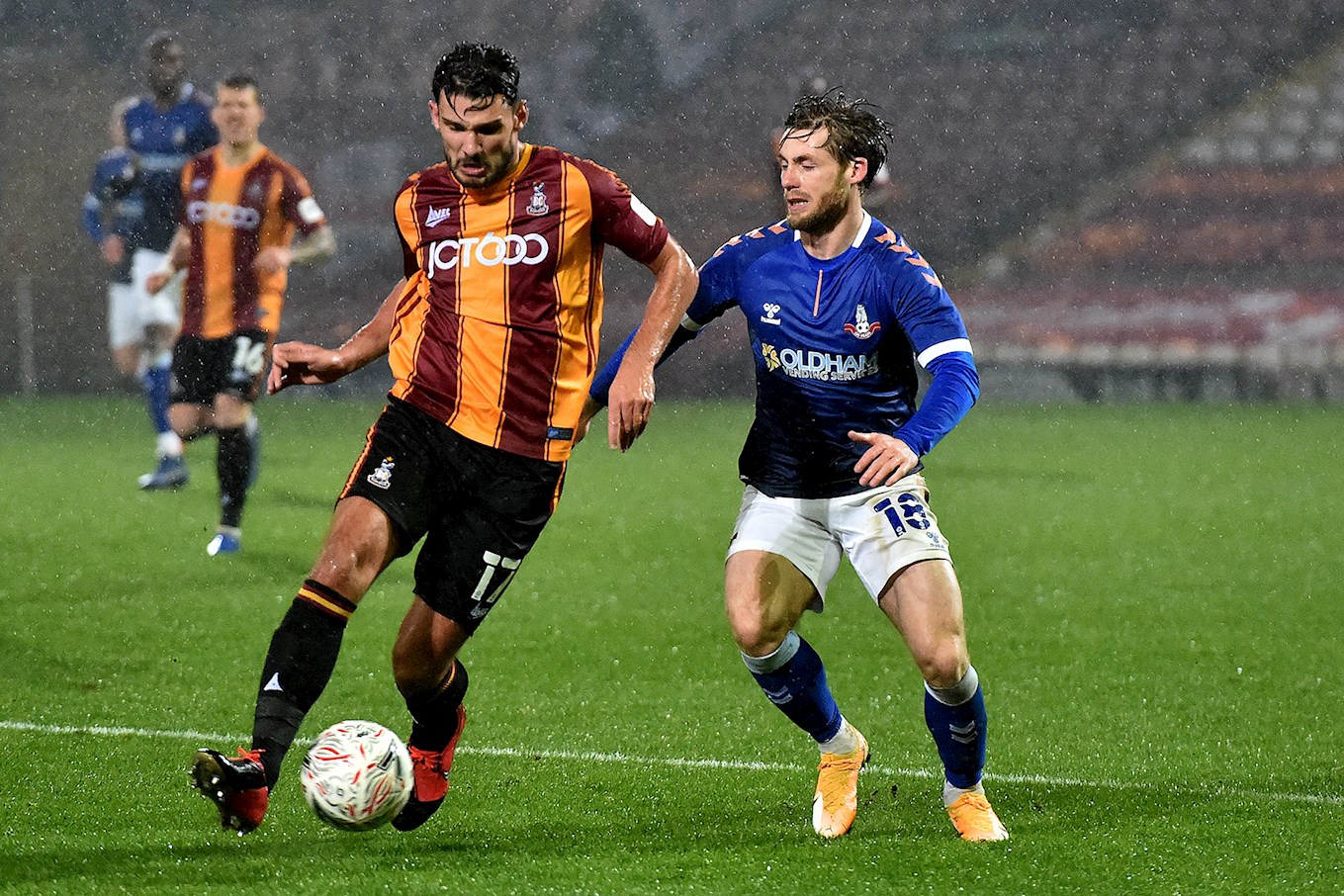 Latics have already beaten Bradford twice this season in both the EFL Trophy and the FA Cup.

In the EFL Trophy, Davis Keillor-Dunn gave Oldham an early lead before the hosts equalised through a Will Sutton own goal but a late brace from Alfie McCalmont meant Latics finished their EFL Trophy group with a 100% record.

The second time Latics played at Valley Parade this season they had to come from behind to earn their place in the Third Round of the FA Cup. Clayton Donaldson had given the Bantams the lead from the spot before goals from Conor McAleny and Danny Rowe gave Oldham a deserved win. 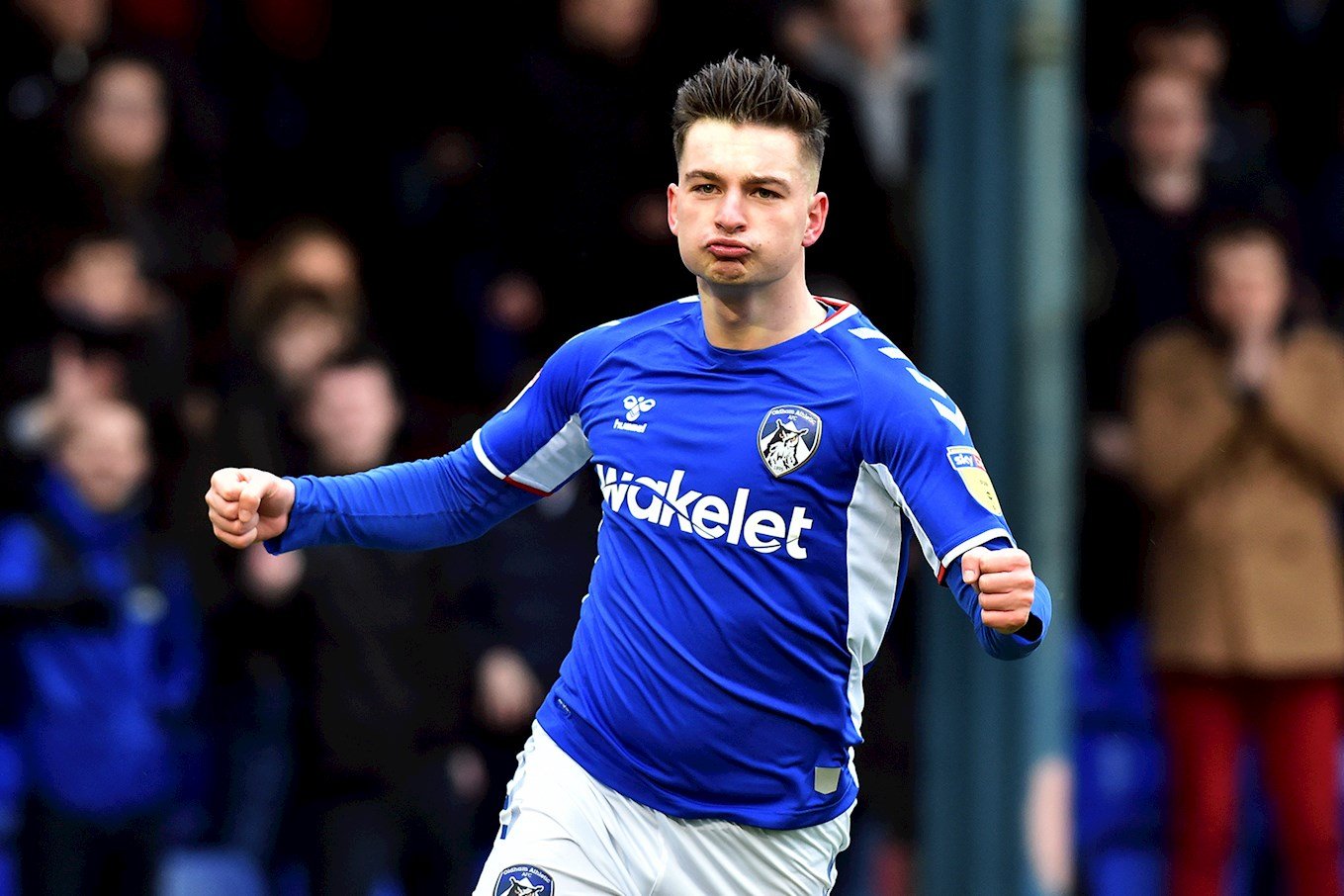 The last time that Bradford came to Boundary Park ended in a win for Latics. First half goals from Zak Dearnley, Jonny Smith and Mohamad Maouche saw the hosts win 3-0.

In terms of selection, Head Coach Harry Kewell has announced striker Zak Dearnley may be available for selection after a lengthy time out on the sidelines.

Harry Clarke also returns after being cup-tied in the week, but it looks like George Blackwood will still be out injured along with Andrea Badan and Kyle Jameson who are recovering well from hamstring tears. 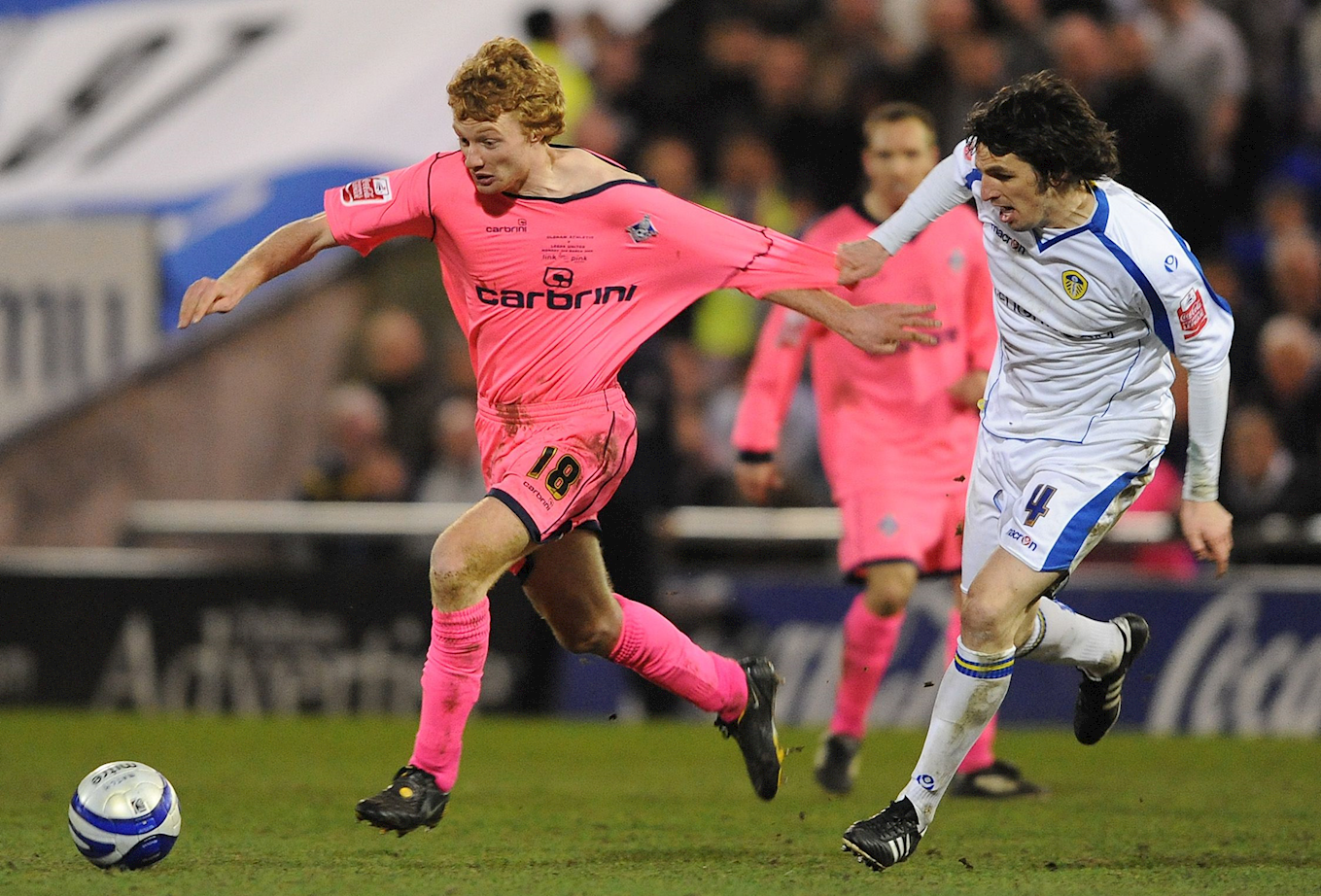 The 33 year-old signed for Bradford in 2019 following a season spent with Blackpool. He spent just one season at Valley Parade and made 15 appearances for the club in all competitions.

In the dugout for the visitors is Stuart McCall. 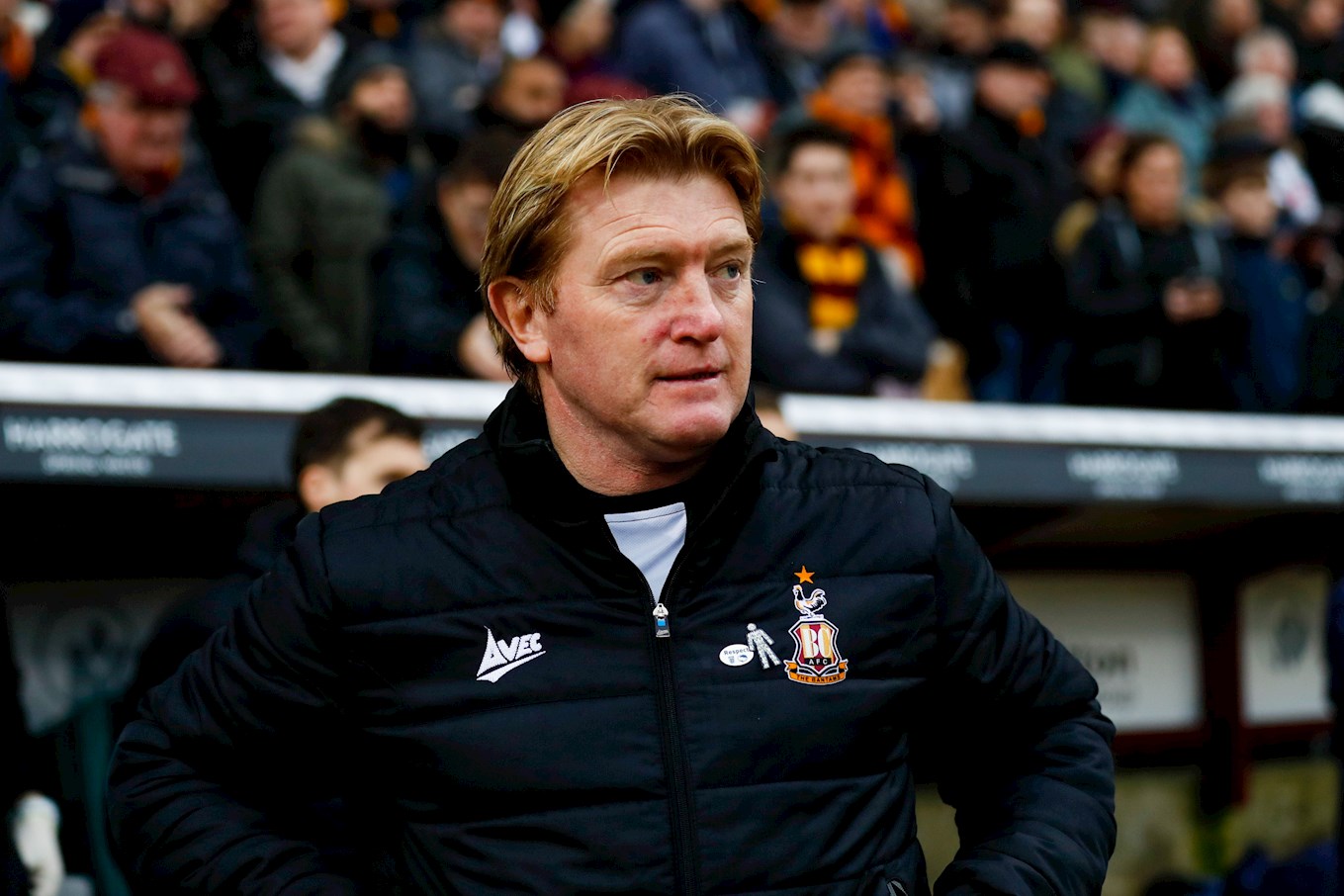 The man in charge for the game tonight is Anthony Backhouse.

Officiating 14 games so far this season, he has handed out 42 yellow cards and a single red.

He last officiated a Latics game this season away at Salford City.

He will be assisted by Abbas Khan and Richard Wigglesworth, with Conor Brown as the Fourth Official.

Latics are 6/4 favourites to beat the Bantams for a third time this season, whilst Bradford are 13/8.

In both of the games played between the two sides this season Latics have won with both sides finding the back for the net for the same to happen this time Sky Bet have boosted the odds from 4/1 to 5/1. 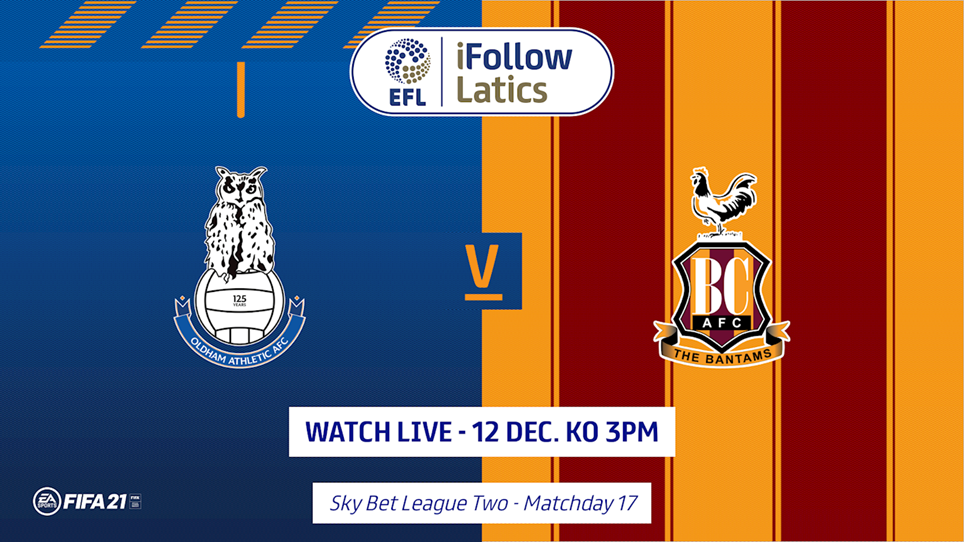 
Ahead of the home Sky Bet League Two fixture this afternoon, current season ticket holders will gain access directly if details are up-to-date.

A first Oldham goal for Dylan Bahamboula and a captain from Carl Piergianni sent Harry Kewell’s men 2-0 up at the break and Davis Keillor-Dunn completed the scoring to make sure of victory.

Latics made a sloppy start to proceedings which were epitomised by Brice Ntwambe surrendering possession of the ball from a quickly taken free-kick which gave Bryce Hossanah a run at Cameron Borthwick-Jackson, but the ex-Manchester United man got back in time to block the cross.

The visitors had an early shout for a penalty in the seventh minute, but Anthony Blackhouse was unmoved by the cries of handball.

Bahamboula opened the scoring in the 10th minute, it was a quick flowing counter-attack that saw the mercurial winger charge towards the goal, utilising his trademark step over to ease his way past his man before cutting inside and slotting the ball past Richard O’Donnell for his first goal in an Oldham shirt.

In the 22nd minute, Carl Piergianni had an opportunity to double the deficit when Bobby Grant picked him out from a corner, but the centre back’s header was wide of the mark.

Just three minutes later the Latics skipper had a similar chance from another exquisite delivery from Grant, but this time he made no mistake and his powerful header gave O’Donnell no chance and doubled his side's lead.

The Bantams looked to immediately get back into the game as Hossannah did very well to break down the right-hand side and was able to pick out Harry Pritchard inside the box, but the forward's effort went narrowly over the bar.

Much to the dismay of Harry Kewell, the visitors were awarded a free-kick in a dangerous position in the 31st minute. Ian Lawlor did well to deal with Wood’s free-kick but the ball fell on the edge of the box to Watt who curled an effort narrowly over the bar.

Stuart McCall’s men had another shout for a penalty but Blackhouse decided that Hossanah was not fouled by Piergianni and decided instead to book the wing-back for simulation.

Clayton Donaldson summed up his side’s first 45 when he somehow failed to convert from six yards out. Lawlor had made a smart save but the ball ended up in the path of the veteran striker who connected with thin air instead of the ball.

Ben Garrity came close to increasing Bradford’s misery in the 41st minute, but his low strike went narrowly wide of the post.

The Bantams had a good start to the second-half and Donaldson almost atoned for his first-half miss but his acrobatic effort went wide of the post and moments later Lee Novak had the ball in the net but he was denied a goal on his return to the side by the assistant referees flag.

Bahamboula was a whisker away from his second goal of the game in the 58th minute, Conor McAleny had been cynically fouled by a Bradford player and Bahamboula stepped up to take the free and his well-hit effort went narrowly wide.

Latics continued to live dangerously and had it not been for a heroic block from Grant off the line in the 61st minute, Bradford would have had a foothold back in the game.

With 20 minutes to go, the visitors had yet another chance to reduce the deficit but Watt’s free-kick from the corner of the Latics box was wasteful.

The points were wrapped up in the 75th minute, substitute Davis Keillor-Dunn expertly cut inside the Bantams box and the attacking midfielder waited for a gap to open before sliding the ball past the helpless O’Donnell.

Latics fans will have enjoyed seeing Zak Dearnley made a return to competitive action following the injury he picked up against Cheltenham Town, he replaced Grant with 10 of the regulated 90 minutes left.

Paudie O’Connor did manage to pull one back for the visitors in the 86th minute as he powered home a header that gave neither Lawlor nor the Latics man on the line a chance to keep it out.

Moments later, Donaldson had another great chance, but his effort from close range was blocked for a corner kick.

More sloppiness from Latics allowed an opening for Pritchard but Garrity did well to make a strong tackle to end the attack.

McAleny should have added a fourth in time added on but he was unselfish and decided to try and slide the ball to Dearnley instead of having a go. O’Connor was on hand to clear the ball, denying Dearnley a tap in.

He had another golden opportunity to add to his tally on the counter, it was Dearnley who found him but McAleny’s first time effort was a comfortable save for the Bantams keeper.

Oldham did manage a short storm that followed O’Connor’s goal and held on well to claim a valuable three points at Boundary Park.


Ahead of the home Sky Bet League Two fixture this afternoon, current season ticket holders will gain access directly if details are up-to-date. 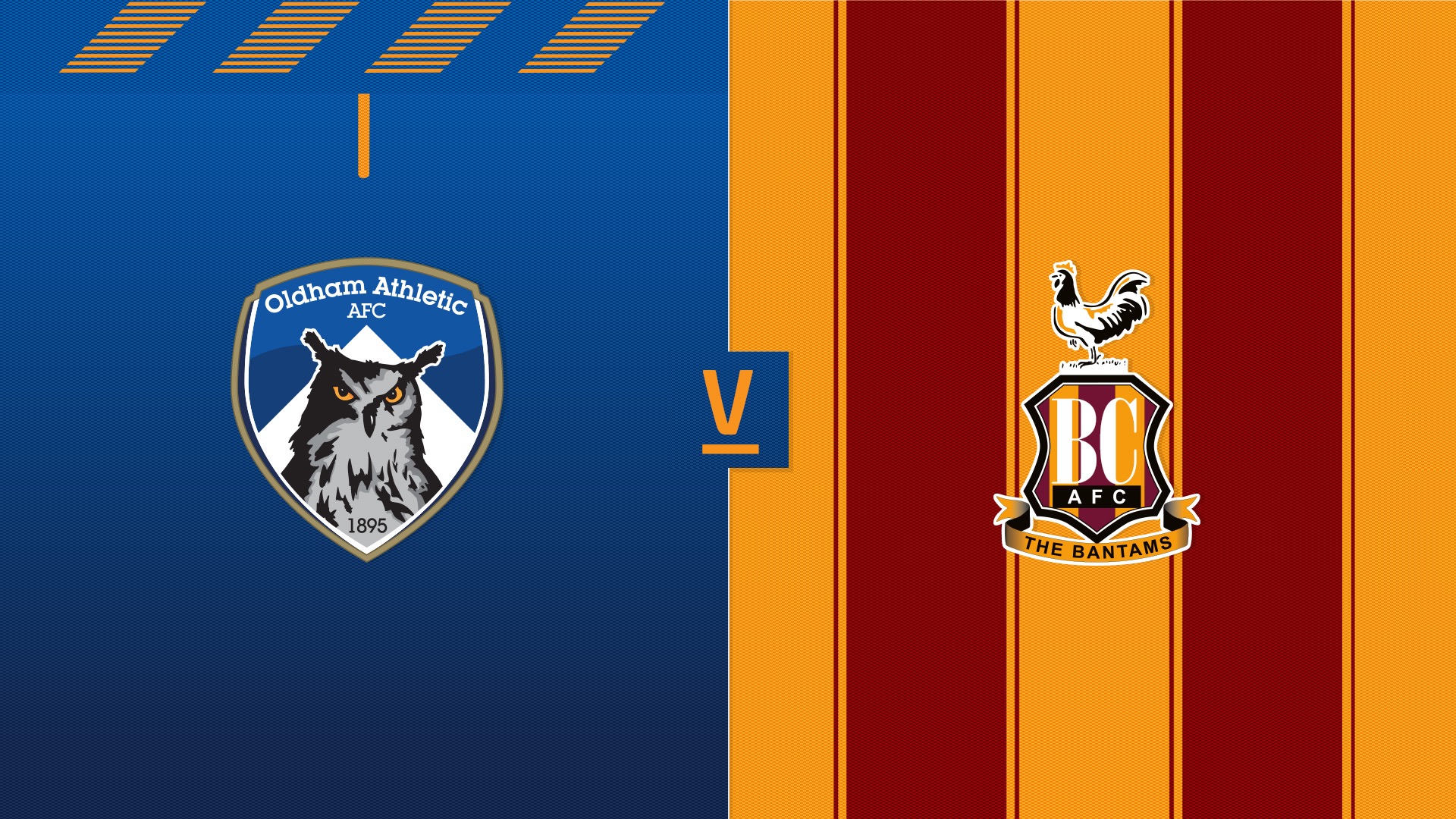 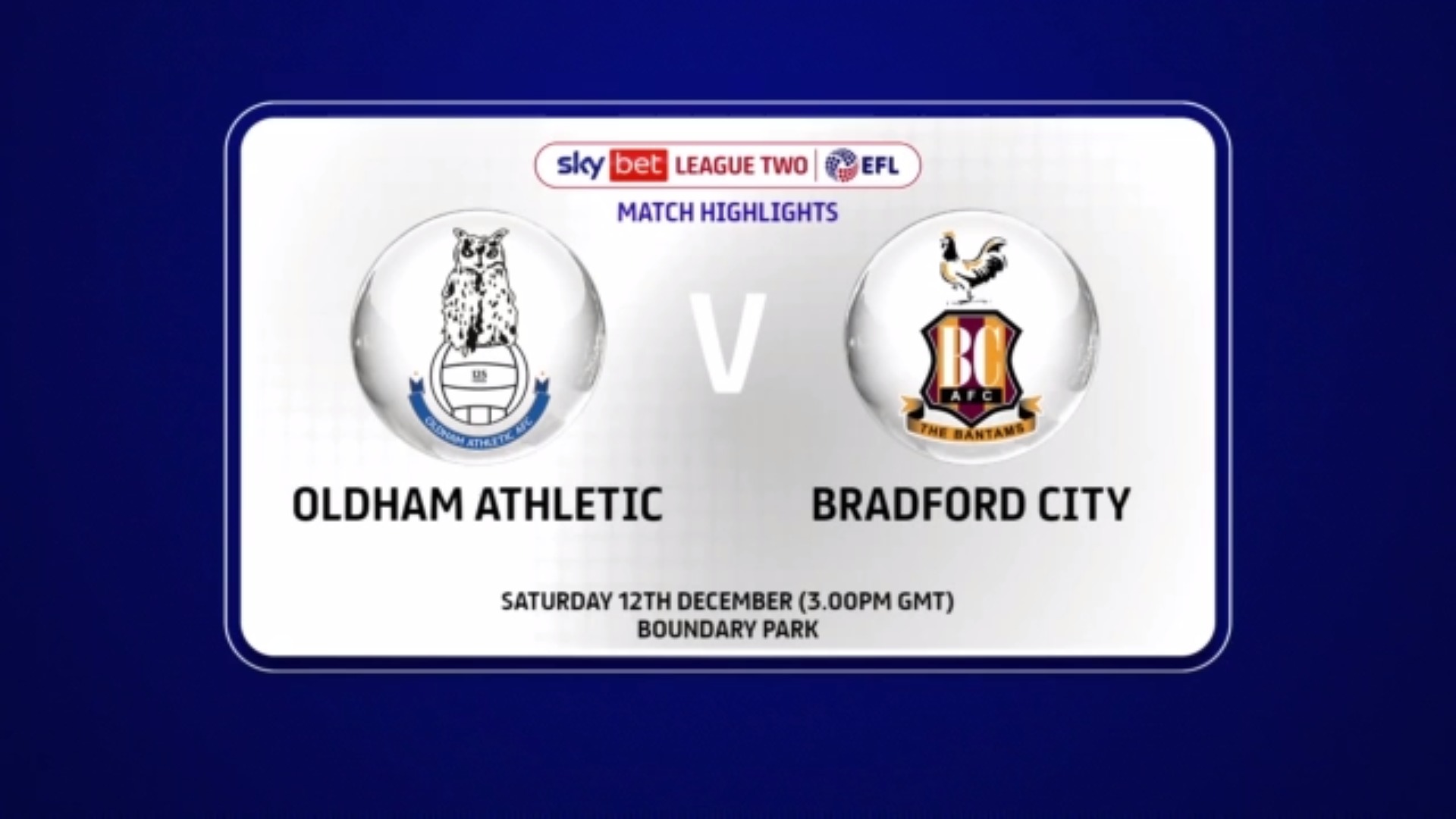 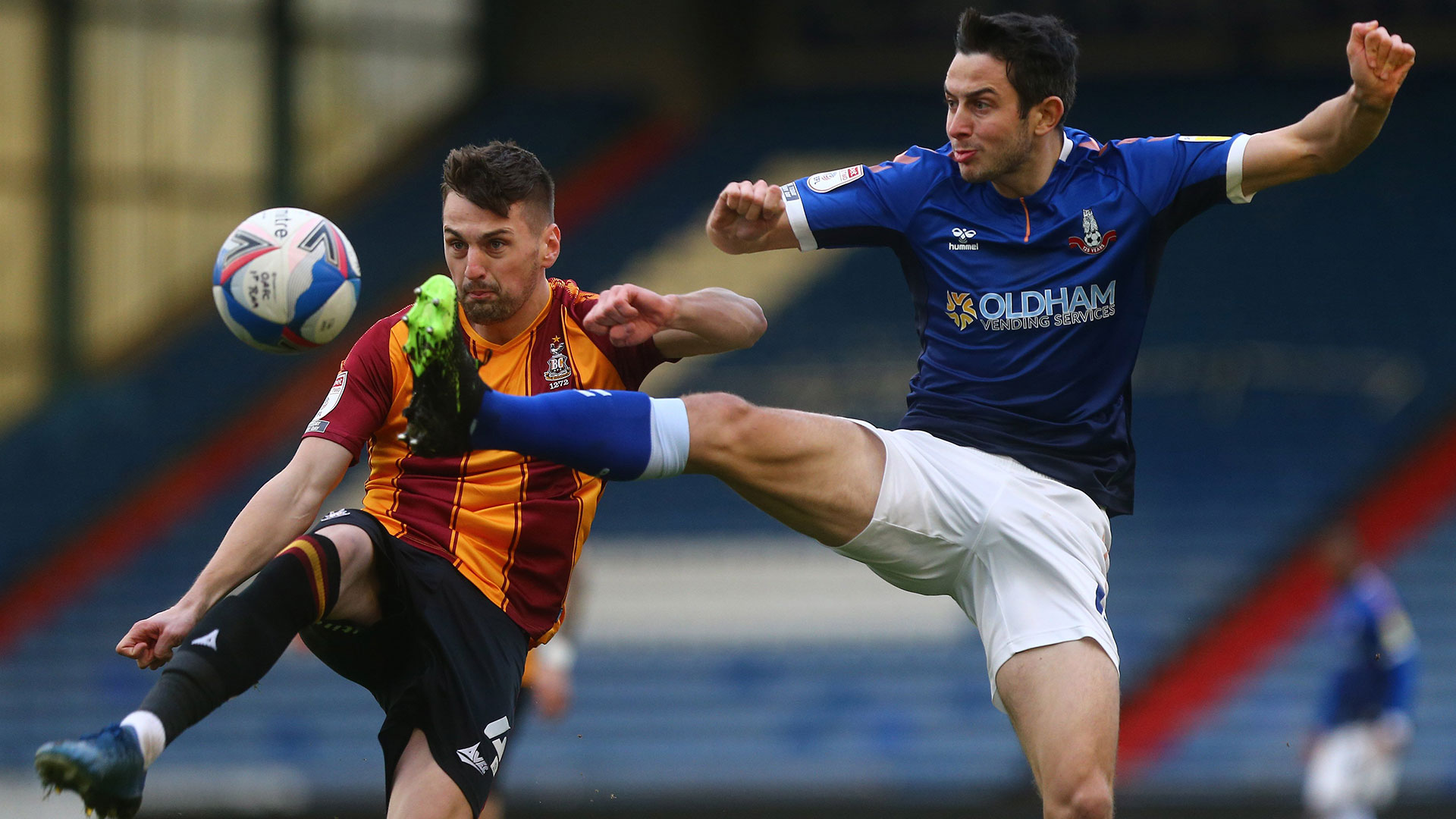