Oldham were perhaps unlucky to come out on the losing side in their last encounter, losing 3-2 away at the high-flying Port Vale.

Twice John Sheridan’s men pegged Vale back with equalisers through Christopher Missilou and Davis Keillor-Dunn before ultimately a 54th-minute goal for the hosts proved to be the match’s winning moment. 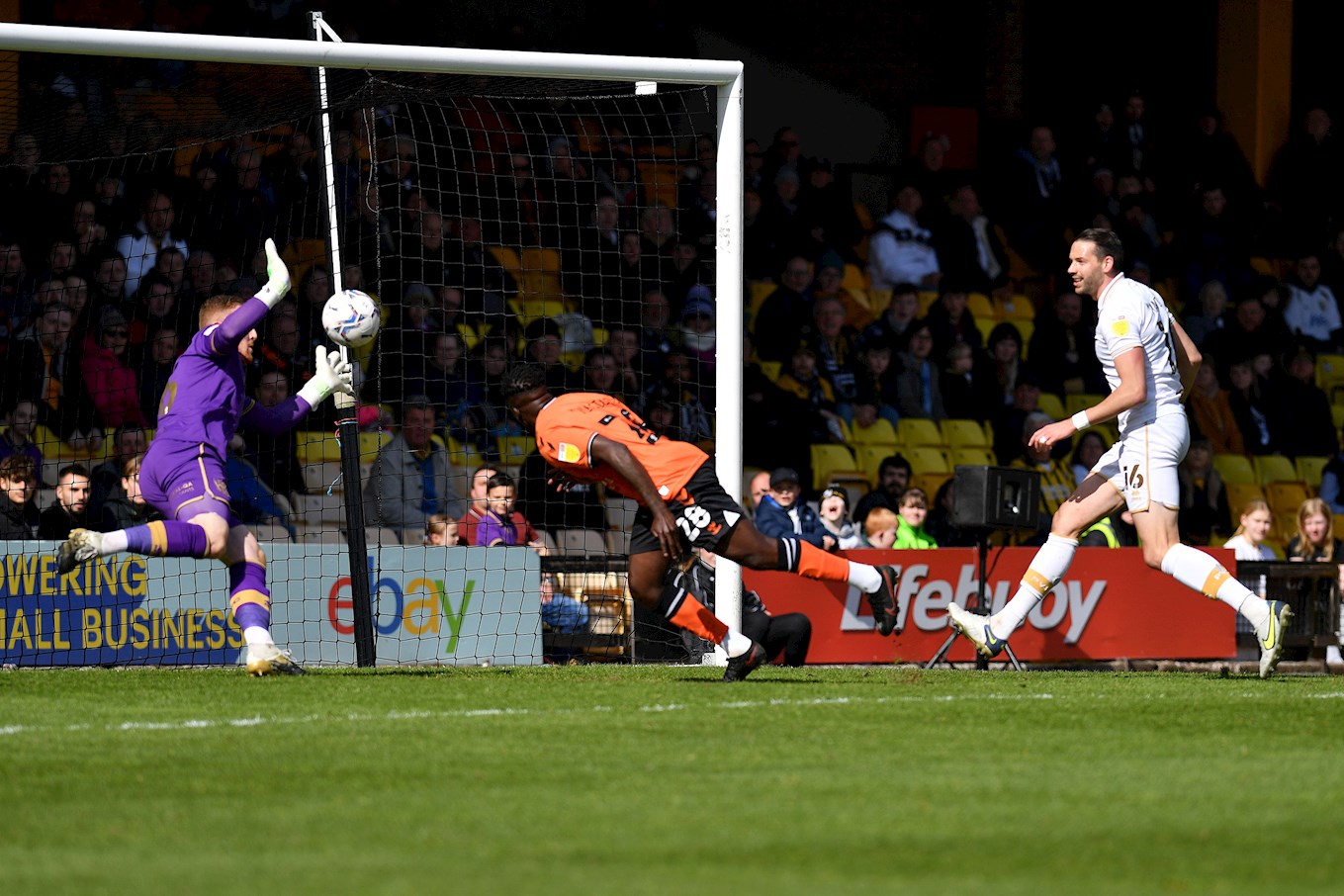 With results elsewhere not going to plan, Oldham remains just outside of the relegation zone but only on goal difference for the moment.

Northampton come into this tie on a mixed run of form. 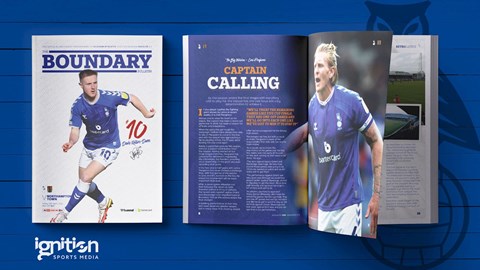 With five games to go, they still have a chance at securing at an automatic return to the third flight, but they have harmed their chances by picking up just one point from their last two games.

They have lost half of their previous six league meetings which could have Latics optimism going into the big game.

With just two goals scored in their last four outings, the Cobblers will be hoping to find a return to goalscoring form when they travel to the North West.

Situated in 5th place they still have so much to play for. Due to the tight nature of the top end of the table, they could still sneak into the top three whilst they also may be looking over their shoulders as just two points separates them and 8th place Salford City.

Latics are currently on a five-game run without managing a victory in this fixture.

Three losses and two draws have come since Latics’ last win against the Cobblers.

You have to go back to a League One fixture in December 2017 for their last win against them, a convincing 5-1 victory.

On the scoresheet for Oldham on that day was Jack Byrne with two, current Oldham man Tope Obadeyi, Gevaro Nepomuceno and Craig Davies.

When the two clubs met earlier on in this campaign, it was Town who came out on top with the game ending 2-1 at Sixfields.

Sam Hoskins was on target for the Cobblers in their last League Two victory and he will no doubt be hoping to help his side to victory again. 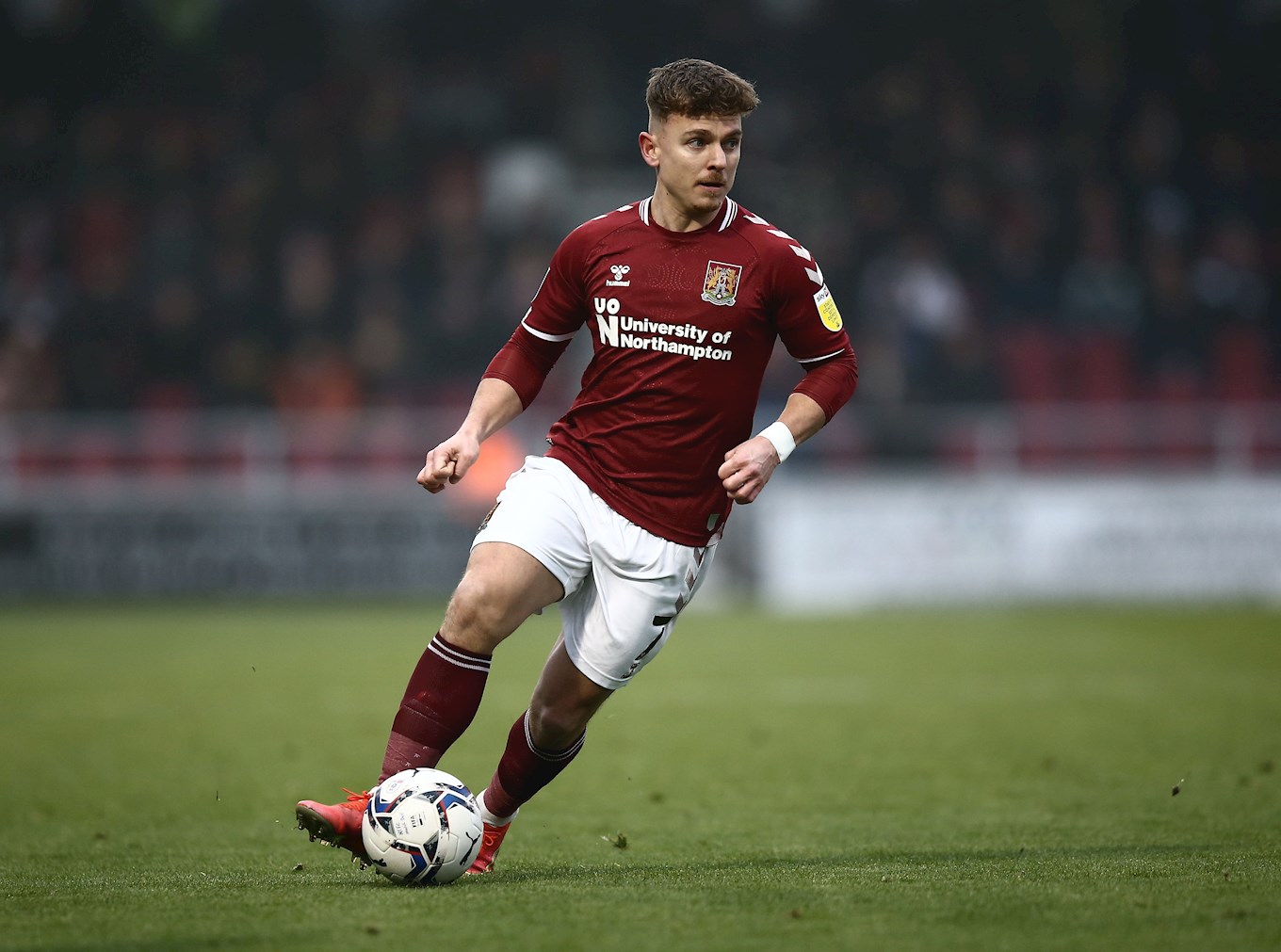 Hoskins has scored ten times for the Cobblers in the fourth tier, whilst providing a further four assists.

He has been directly involved in 30% of all goals scored by Town so far this league campaign.

The Dorchester-born forward began his footballing career at Southampton.

Spending years in the much-revered academy down on the South coast, Hoskins had loan spells with Preston North End, Rotherham United and Stevenage before finally leaving on a permanent basis to join Yeovil.

He left Yeovil in 2015 following their relegation to League Two, joining Northampton Town.

Hoskins has been at his current club ever since becoming somewhat of a mainstay at Sixfields.

Playing 289 times to date for the Cobblers, the 29-year-old has managed a respectable 51 goals whilst also registering 33 assists.

Jon Brady is the man in the dugout for the visitors. 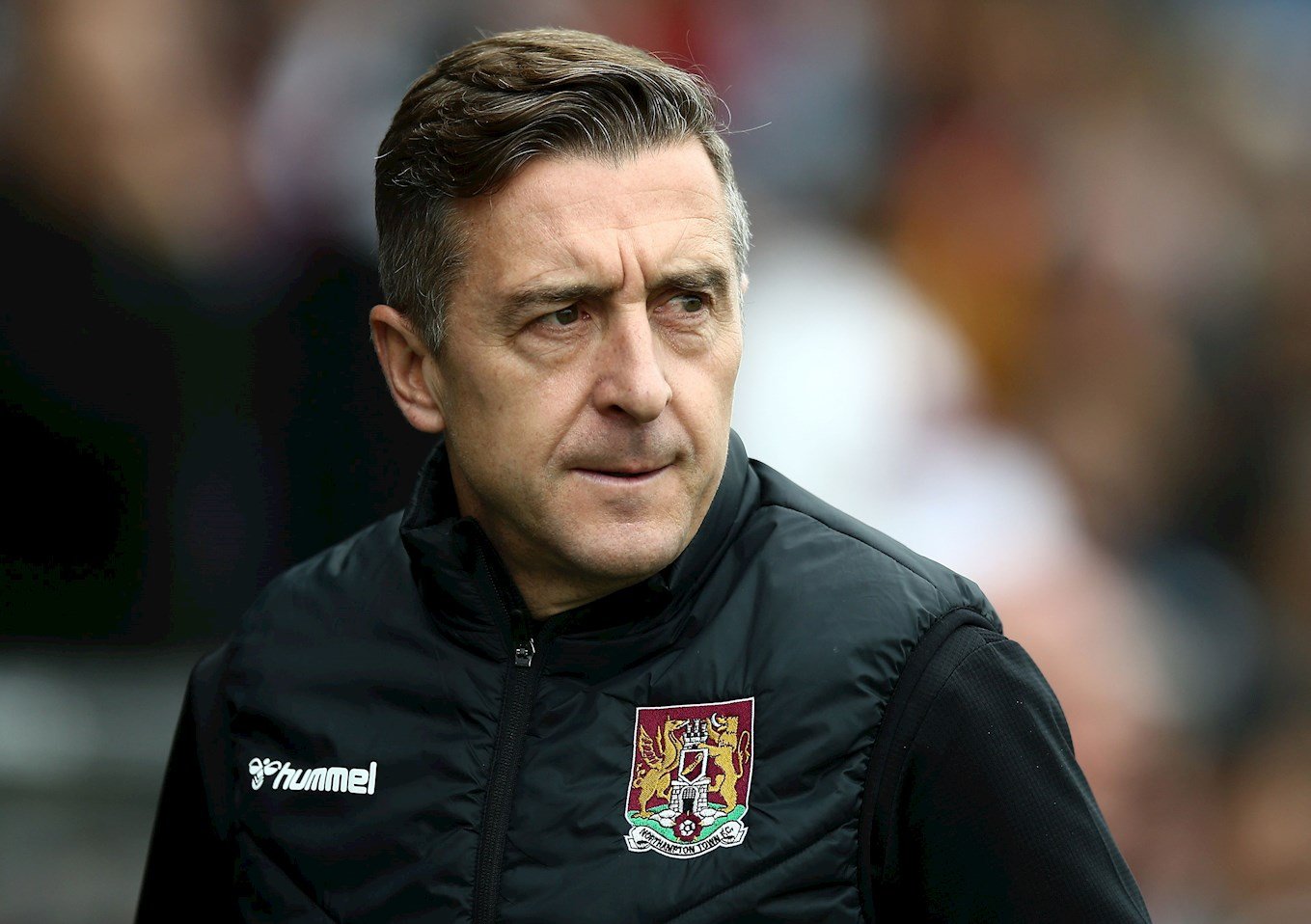 Born in Newcastle, Australia, Brady has been a part of the setup at Northampton Town since 2016 and he has performed a number of roles during his time at the club.

He has been boss since February 2021 when he replaced Keith Curle.

Brady was unable to prevent their relegation back to the fourth tier but was handed the job on a permanent basis in May 2021.

His other previous managerial experience came with Brackley Town.

The official in the middle for the game is Sam Purkiss. 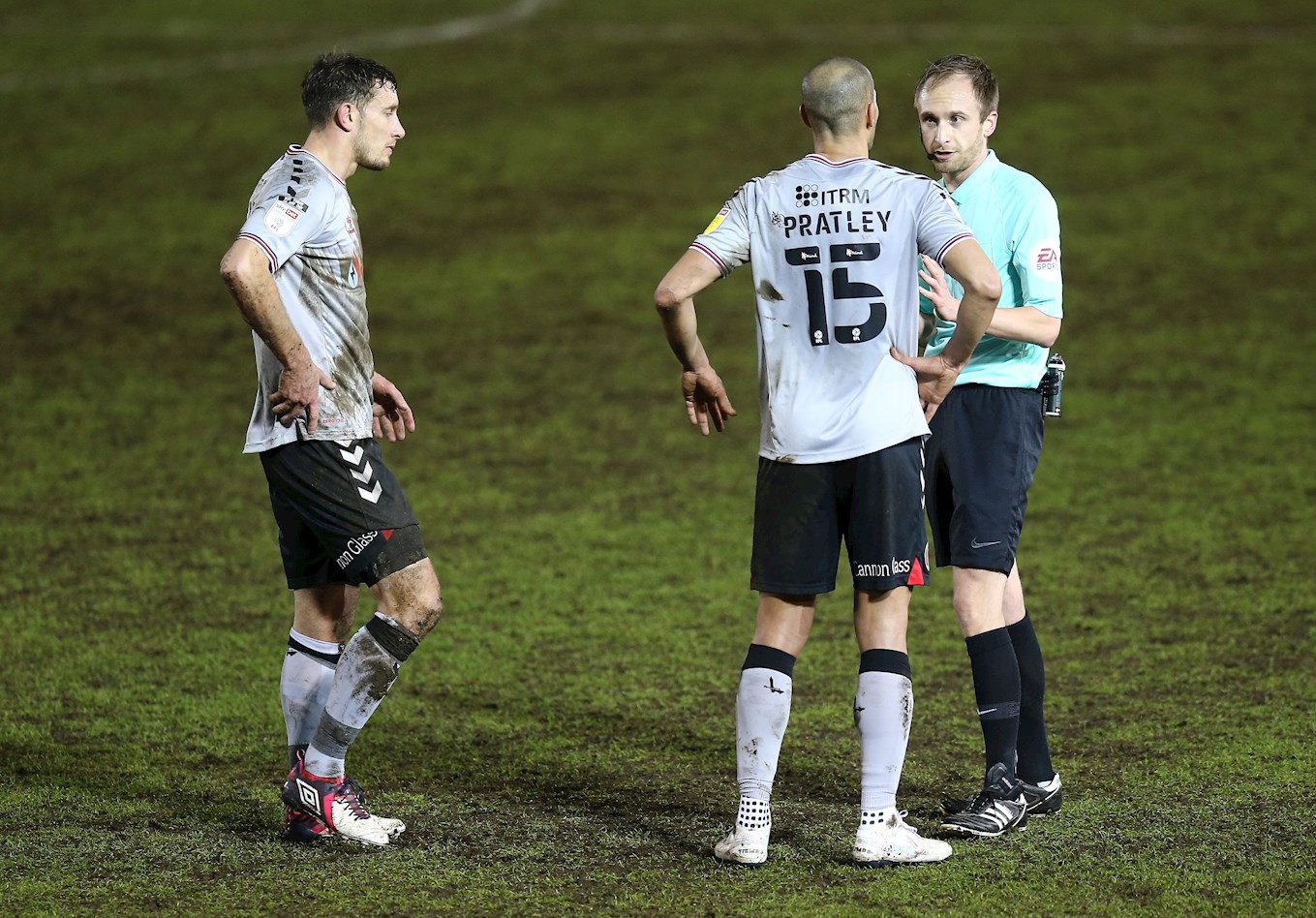 Purkiss last officiated a Latics game in August 2021 for our 1-0 defeat away at Bristol Rovers. On that day, he handed out five yellow cards and zero red cards.

He's taken charge of 29 games, so far, this campaign, handing out a total of 107 yellow cards and four red cards.

Purkiss will be assisted by Abbas Khan and Billy Smallwood, with Thomas Harty as the Fourth Official.

Latics are 23/10 to pick up a huge three points when Northampton come to town.

Town are favourites at 11/10 as they look to get their promotion bid back on track. 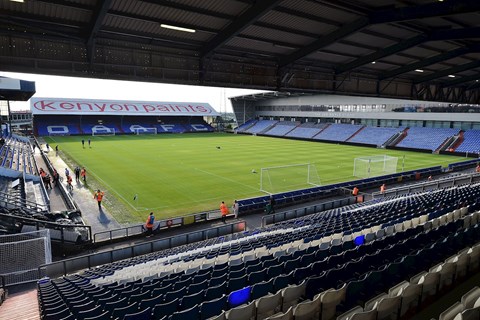 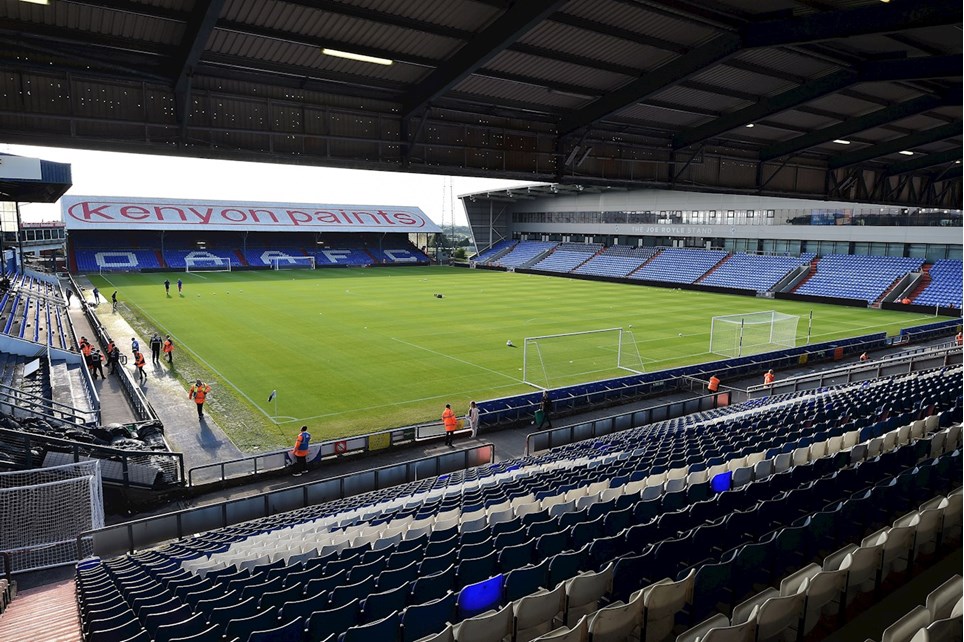 
With it being the Easter weekend, Latics supporters including those in the UK, will be able to watch the game against Northampton Town on Good Friday (15th - 3pm KO) by purchasing a live streaming...

The hosts found themselves behind just before the opening forty-five neared completion as Jon Guthrie steered his effort beyond the sea of bodies in front of goal from Sam Hoskins' free-kick.

After the restart, Louis Appéré notched another for his side following good work from Josh Felix-Eppiah which condemned Oldham to defeat on home turf.

To make matters worse, Carl Piergianni was shown a straight red card with minutes to spare in the clash.

Shez named three changes to his side following a defeat on the road at Port Vale last time out. Harrison McGahey, Alex Hunt and Tope Obadeyi were back in the team and looked to repay the faith that the gaffer had shown in them.

The first-half left a lot to be desired in terms of quality, especially with both sides in need of vital points as the season nears its finish. Although, the travelling support were celebrating in the fifth minute, but were left frustrated just moments later.

Mitchell Pinnock, a vital component of their team, delivered a low cross into a dangerous area before Appéré tapped into an empty net at the back post, however, the linesman had already raised his flag to the relief of the Latics backline.

Once again buoyed by vocal support contrived by The Athleticos, the ‘boys in blue’ began to apply pressure on their opposition with Liam Roberts forced into two fine saves. Hunt unleashed a fierce strike towards the left-hand bottom corner which was parried into the path of McGahey inside the box, the physical defender’s thunderous effort was denied by the shot-stopper.

Then, Obadeyi raced down the right-flank before he played it inside to Davis Keillor-Dunn, but the attack-minded individual witnessed his curled effort go straight into the hands of the goalkeeper.

Prior to the interval, Jon Brady’s outfit found themselves ahead in the encounter through Guthrie. After Sam Hart committed a needless foul outwide, the resulting free-kick was delivered to the towering defender, and he managed to flick it into the bottom corner for his seventh goal of the season.

Oldham thought that they had the perfect start to the second-half as Piergianni fired past Roberts from close range, but the referee adjudged the skipper to have handled the ball before he scored with frustration becoming apparent around the ground.

An East Midlands-based side, they manufactured a slick counter-attack which resulted in Hoskins, a long-serving player and a fans favourite, racing one-on-one with Danny Rogers, but the ‘keeper did enough to prevent him from scoring as he ushered him over the byline.

The Cobblers extended their lead in the 66th minute through a January acquisition from Dundee United. Felix-Eppiah dribbled into the area before producing a low cross to the feet of Appéré, and he flicked past Rogers.

He should’ve added to his tally straight away after he found himself clean through on goal, the frontman fired his strike past the far post which gave Latics a glimmer of hope in the contest.

It went from bad to worse for Oldham as Piergianni received a red card for elbowing Guthrie whilst partaking in an aerial battle against him.

As the final whistle sounded, it meant that Latics had tasted an irritating defeat as Brady and Northampton continue to eye up an instant return to Sky Bet League One.


With it being the Easter weekend, Latics supporters including those in the UK, will be able to watch the game against Northampton Town on Good Friday (15th - 3pm KO) by purchasing a live streaming... 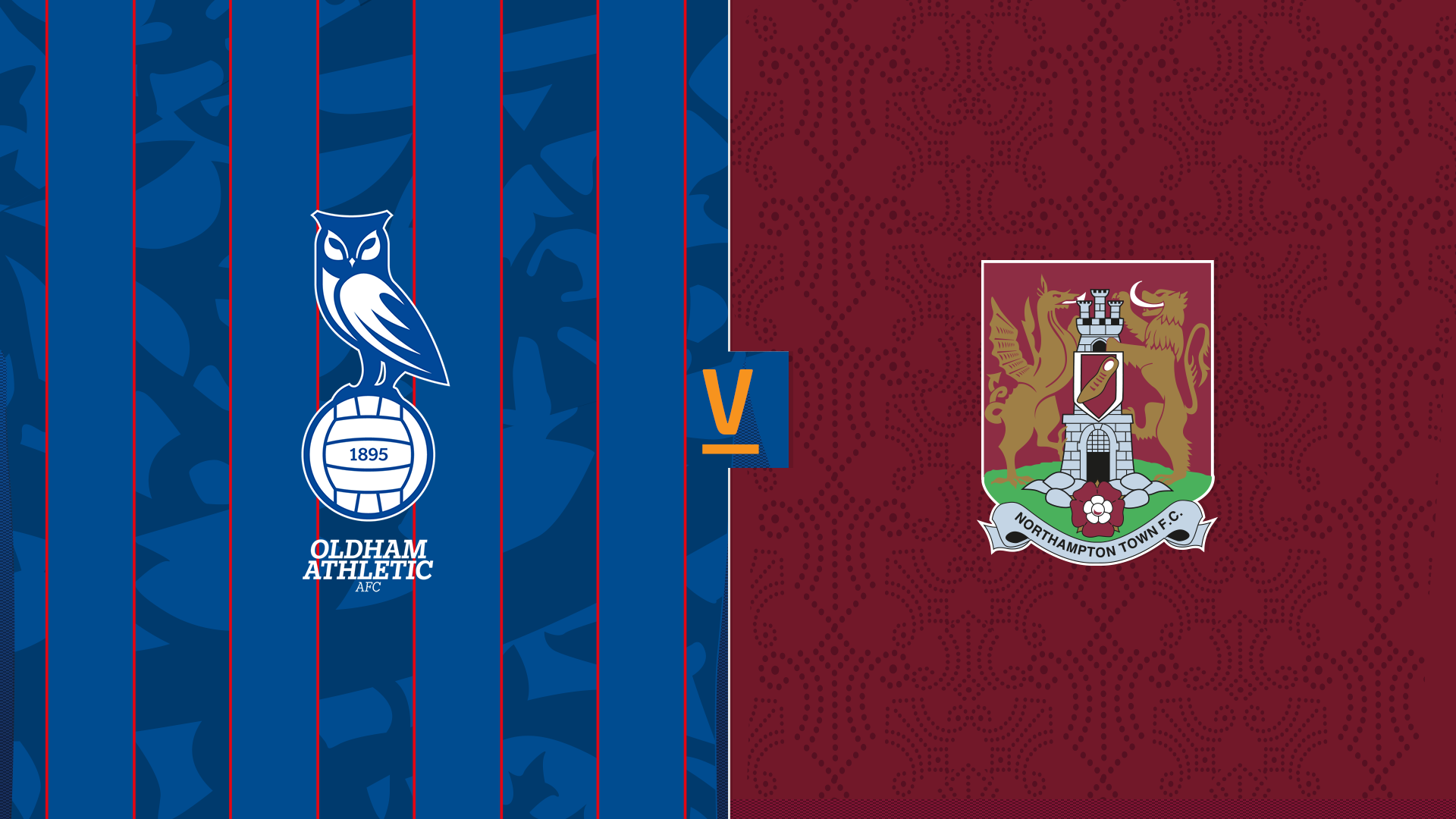 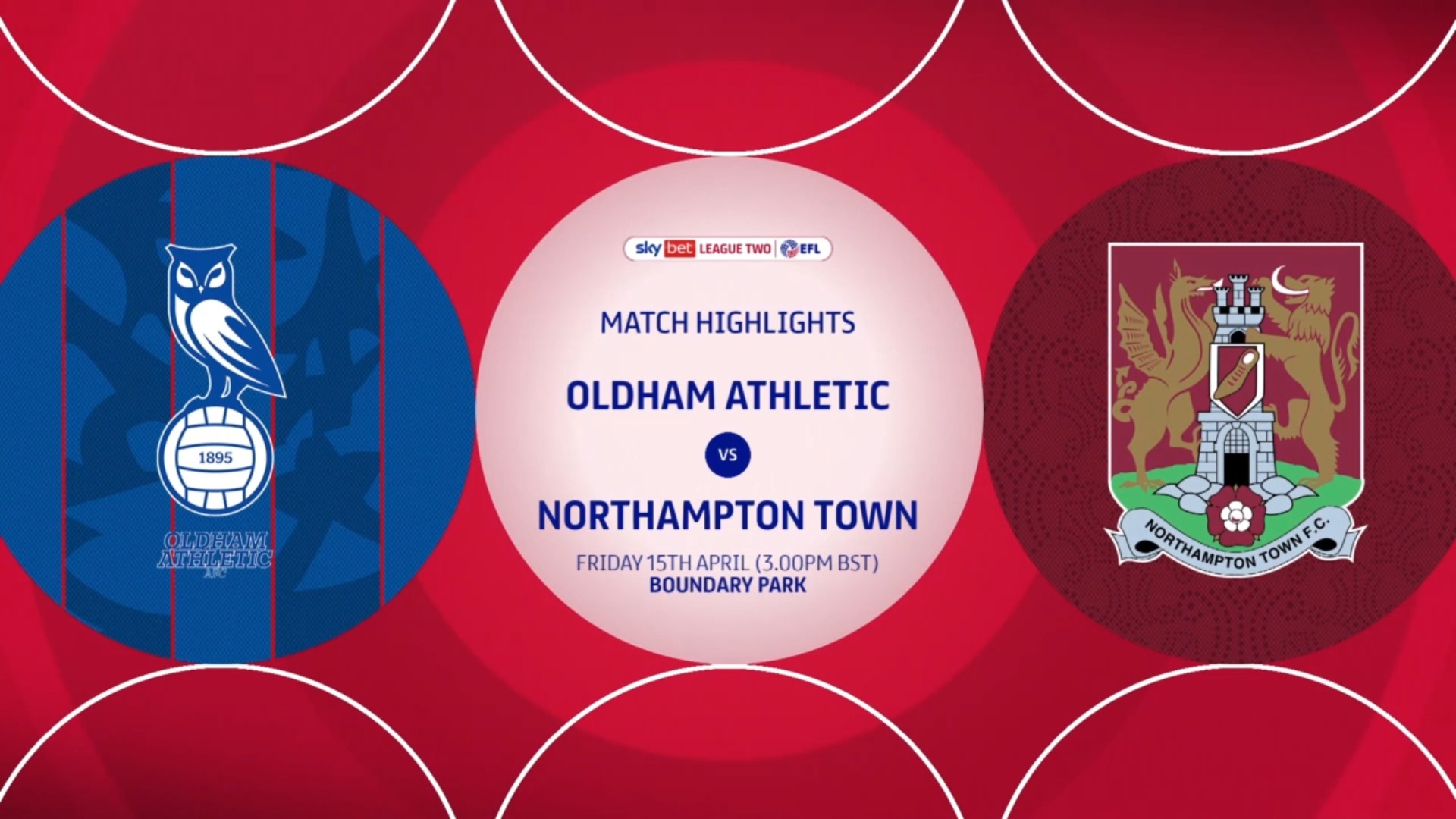 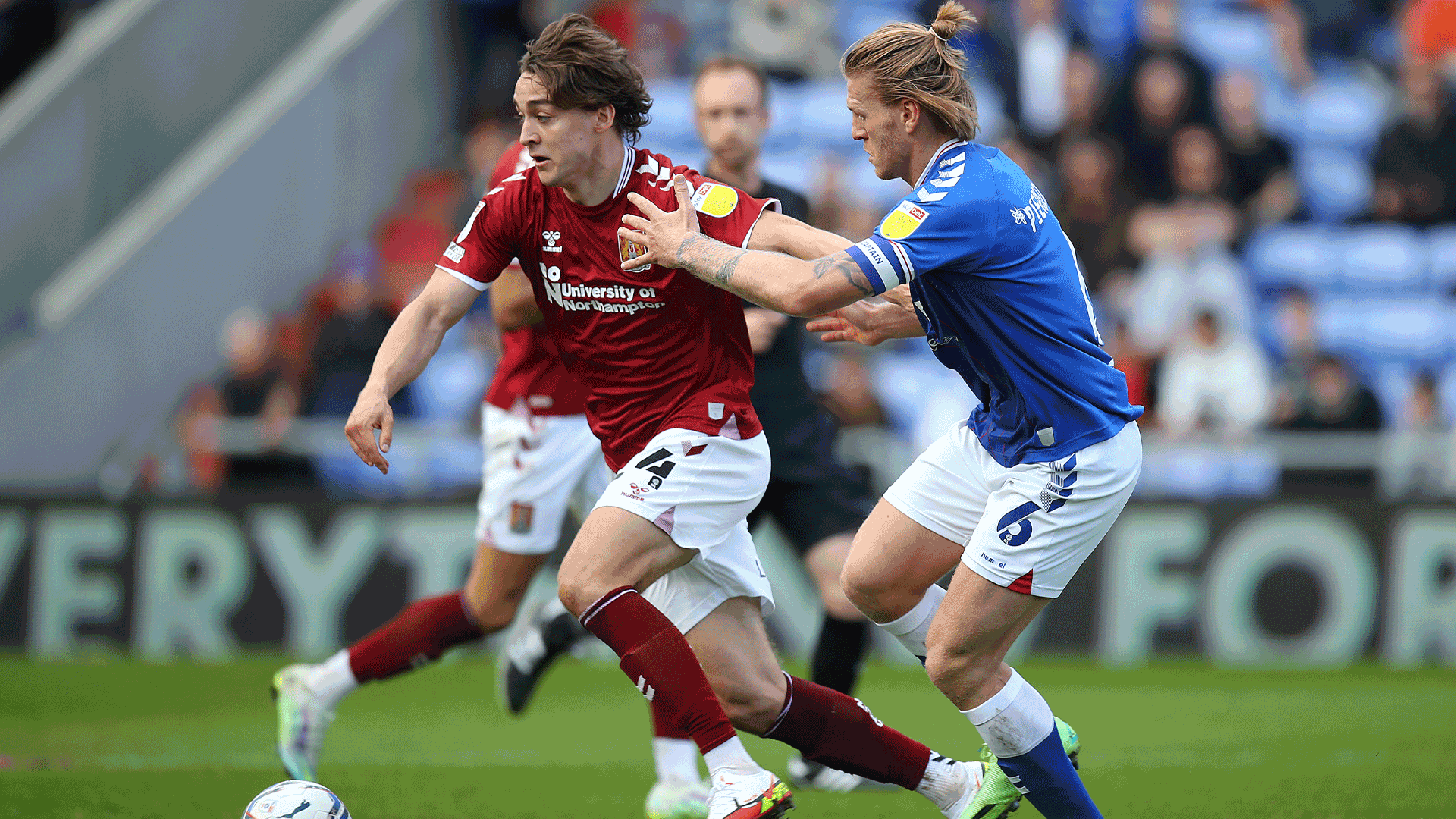