Head Coach Dino Maamria took the positives from the point against Leyton Orient but reiterated that he is working on making those kind of games count by improving the squad.

Looking back over the full 90 minutes Maamria was frustrated that his side couldn't make the important game count.

"From the outset it's a disappointing draw. We look at those home games that we need to win, but on the other side of it I think the players have give absolutely everything they've got but we've come up short and that's where we are.

"We've got to be honest about it, we've got to look at the squad we have and we're trying our hardest here to find a team that is going to score goals and win football matches.

"We've even put Jonny Smith as a centre forward and we're not scoring enough goals. We've got three centre forwards and to be fair to Akpo today he was tremendous throughout the 80 minutes he played until his legs went a little bit as he's not being playing any football so it's understandable.

"Jonny Smith was played up front in the last few games because he's a goal threat and he showed that again with his goal. My frontline need to do a lot more though because we put a lot of great balls in the box."

His Latics team started in the best possible when the on-loan bright spark Jonny Smith opened the scoring in the first minute and was pleased his side learnt from last week in the opening stages.

"It was a big lesson from last weekend and my emphasis was on starting nice and bright and on the front foot and we did exactly that.

"The problem was after the first 15 minutes we stopped playing football. We were smashing balls forward, it just wasn't really enjoyable to watch. It's not what we set out to do."

He added: "We ended up kicking too many long balls and it's not something we've been working on. We stopped playing basically until we give them the equaliser.

"The second-half we tried our best and threw everything at it. They were very fortunate, their keeper had a tremendous day. You see the stats with the goals and all the rest of it, we just haven't got that goalscorer we're looking for and that's something I know from day one coming in, I know the squad I've got is lacking in many areas and one of them is lacking goals and it's obvious for everybody to see." 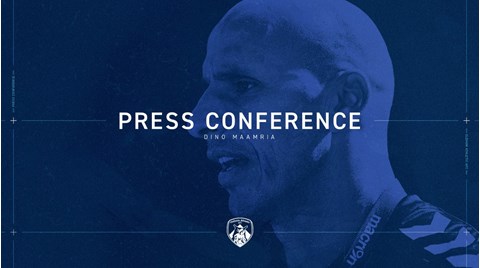 Midfielder David Jones made his debut for the club in the fixture and alongside another ex-Claret in the centre of the pitch, the Head Coach was pleased that his own additions are showing he made the right decision.

"Well I thought he was our best player today. Him and Chris McCann in midfield and Akpo I'm glad we've got those three players in when we needed to because everybody can see the quality I'm trying to bring in here.

"Jones was outstanding and with McCann they both totally dominated it. They played the right football, they showed composure, experience, energy and were a goal threat as well."

"We're disappointed as well because as a back three we defended a little too deep and that allowed their front one Angol and even Wilkinson to take the balls on their chest, to their feet and bring other players in and that was disappointing because my emphasis has been to try and press high and make sure we keep a high line.

"We need to address that because we can't afford to drop that deep and that's what happened when we invited that goal and that's an area of improvement.

"Overall those players are giving everything they've got, but we are where we are for a reason."

Despite results not going the way he intended Maamria's team are now stringing a run of form of together heading into a difficult and busy festive period.

"We are five unbeaten, three draws and two wins. There is a lot of resilience the team are showing and if you look at when I came and what it is now are totally two different teams.

"All those are positives and it's been a good return but I'm quite relentless in terms of trying to make sure we're better and I'm getting the maximum out of these players.

"I want to make sure Boundary Park is a place where the team is a force to be reckoned with and I want to get a team here that they win games before they even kick-off, so other teams know what they're going to get.