Latics travel to Swindon Town tomorrow in a Sky Bet League Two fixture and Head Coach Dino Maamria gave his thoughts ahead of the clash.

The Head Coach was disappointed not to have taken all three points last weekend against Leyton Orient, but took a few positives from the game.

"You watch the game back and it's a game that we should have won and could have won, but we didn't. The margin in football is very small, Dave Jones in the 88th minute hits the post and them three points would have taken us 16th and would have put proper daylight between us and the bottom two and it would have made us a little bit more comfortable position in terms of the rest of this month and January.

"But probably we didn't do enough in front of goal to score that second goal and it's an area where we need to improve on.

"Obviously, we brought Akpa Akpro in and he added a little bit of steel for our frontline and Jonny Smith has been playing up front and he has been quite impressive and I've tried to adjust his game, work with him to try and get him to score more goals and have more attempts on goal which he's been great at doing that and I'm pleased to get him on the team sheet again and hopefully he keeps getting better and better."

Swindon Town currently sit top of Sky Bet League Two and Maamria admits his side has to be at their best to pick up the three points. 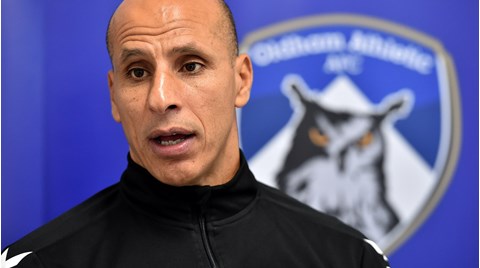 Maamria also thinks that this 'underdog' status can benefit Latics.

"I hope our players will play with more freedom which I think that I've been trying to emphasise especially in possession of the ball, we need to let go a little bit and play with a bit more expression and use the ball better.

"We want to defend as a resilient team and tight in the spaces to make sure that we're not giving the opposition anything out of possession, but in possession, we're trying to keep the ball a little bit better and that's something that we've been working on as well.

"Away from home will take the pressure off us a little bit and they've got a nice and lovely big pitch as well that we can use, and we might make one or two decisions in our team selection to make sure we adapt to that."

Maamria wants his side to continue their current run of form against a few familiar faces at Swindon Town.

"Whatever edge that gives to the game is a bonus to us because we want to make it an edgy game and we want to go there and make it as difficult as possible for them, which we will, and they will have to work very hard to beat us because, like I say, we've been very resilient of late.

"Five games unbeaten now in the league, two wins and three draws that's nine points from five games which is a good return in the league at any stage of the season so we'll keep building and we know that we're nowhere near we need to be, but small steps forward and we keep doing that we'll be in the right direction."

The Head Coach wants to focus on his own set of players, but also wants to adjust his tactics to match Swindon’s strengths.

"I always look at the opposition because sometimes you need to adjust your game and you have your certain principles which are fundamental of the team that we never move from, but within that, we can manoeuvre in certain areas and tighten certain areas according to our opposition."

He added: "Teams are quite different at our level as you see teams that play direct and teams that play from the back and they create chances in wide areas like Swindon do, they score the majority of their goals inside the box which is an interesting stat about them so we've got to make sure that we keep high as possible away from our box and make sure that we're switched on inside the box.

"We won't change the fundamentals, but we'll tweak one or two things to make sure that we win."

Finally, Maamria provided an overview of injury news ahead of the game against Swindon Town.

"Christopher Missilou is out, Johan Branger-Engone is still out and Tomas Egert has had his second session with us so hopefully he'll be back in contention.

"He was on the bench last week, but only had one session of training, hopefully everybody else is okay."