Latics return to league action on Saturday when they travel to Rodney Parade to take on Newport County (3pm KO).

It’s been over a month since Oldham last lost a Sky Bet League Two match and they will be hoping to extend that as they look the side look to increase the gap from the relegation zone.

Victory for the hosts could lift them into a playoff spot as they are just one point of the top seven.

Latics go into the game with just one loss in the last five which came against higher league opposition in the final Leasing.com trophy group game.

Newport come into the fixture on the back of a two-game winning run.

Latics have faced Newport County ten times in the club’s history; winning half of them, drawing two and losing three.

The last time that Oldham had the better of their Welsh opponents was on the 6th October 1981 when they came out 1-0 winners in the League cup in the second round, first leg.

The second leg would finish goalless ensuring Latics made it safely into the next round where they would eventually be knocked out by Fulham after a replay.

Newport have enjoyed a solid start to the season as they bounce back from last season’s League Two playoff final defeat.

County have won seven of their 16 Sky Bet League Two games this campaign and are just one point off the playoff places with two games in hand on the two teams directly above them.

They are also still in two other competitions. Progressing past the group stage in the Leasing.com Trophy and secured their place in the second round of the Emirates FA Cup on Wednesday evening by beating Grimsby Town 2-0 in a first round replay.

Head Coach Dino Maamria ahead of his return to Rodney Parade: "They were unbeaten at home for a long time, Newport is one of my favourite clubs. I spent a brilliant six months there, I think the fans are fantastic, the owners, Gavin the chairman is a fantastic guy. He's one of the best people I've worked with in football.

"Michael Flynn is also a fantastic manager and good friend of mine. I've always had a good reception there, so it's a game personally that I'm looking forward to. I've won there 1-0 and lost there 1-0, two contrasts but it was always tight games.

Michael Flynn: "Dino [Maamria] always has his teams very organised and very competitive. He’ll want to get one over on us because he’s a winner and he’s very passionate.

"I get on really well with Dino, we had a few messages yesterday and he’ll relish coming to Rodney Parade tomorrow.

"We’ve got a fantastic home record and it’s one I want to continue. We go into every game trying to win. I’ve got no problem saying the home record is a credit to the players, staff and also the fans. The fans make it a very noisy and intimidating atmosphere for the opposition. It’s great because we love playing there and long may that continue.

"You can say the players are now used to switching between league and cup matches but I’ve got a really good group who just concentrate on the next game. That’s something that I try to instil in them because you can’t take your eye off the prize. The prize is the next game."

He added: "It’s three points this time, next week is the opportunity to qualify for the Third Round of the Emirates FA Cup. We’re concentrating on three points at the moment and hopefully that’s what we get tomorrow."

Padraig Amond – The 31-year-old Irish striker is someone that Maamria’s side will have to ensure has a quiet afternoon.

Signing for County in August 2017 from Hartlepool United he was the club’s top scorer in the 2017/18 season and that included a goal against Premier League side Tottenham Hotspur in the Emirates FA Cup. 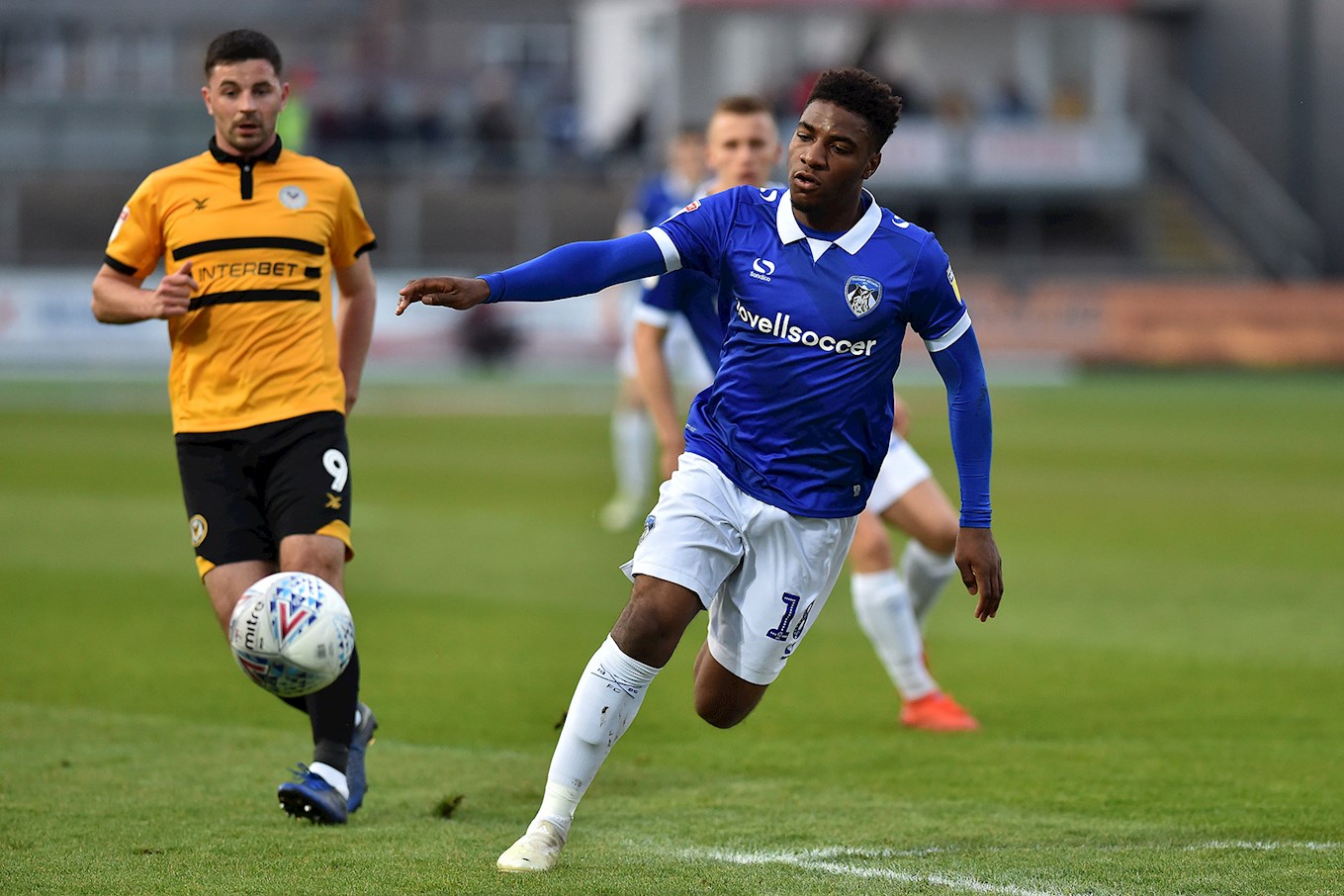 He went from strength-to-strength in the next season, and was again County’s top scorer with 24 in all competitions and was awarded Newport County’s Player of the Year Award.

His 24 goals included a winner against Leicester City in the Emirates FA Cup with other goals against notable FA Cup opponents in Middlesbrough and Manchester City.

County play at Rodney Parade which is considered a fortress from their excellent home record.

The capacity of the stadium for football games is 7,850.

Opened in 1877, Rodney Parade is the second oldest sports venue in the Football League. Second only to Preston North End’s Deepdale. 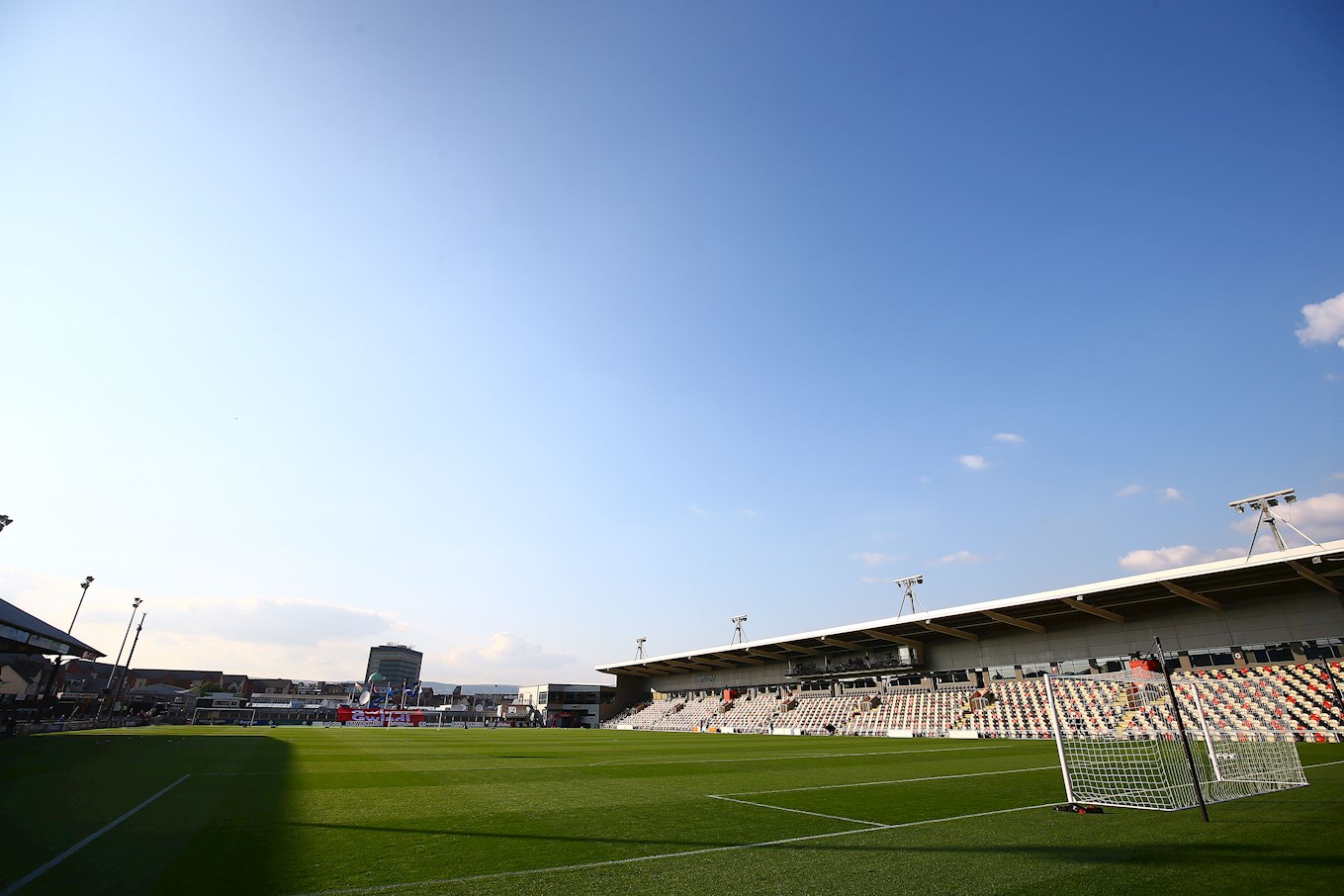 The stadium is owned by the Welsh Rugby Union and as well as Newport County is also home to rugby union sides ‘Dragons’ and ‘Newport RFC’.

It was announced that County would move from the Newport stadium to Rodney Parade in May 2012 meaning that the ground would host association football for the first time.

The ground has also played host for a Women’s World Cup qualifier in a game that England beat Wales 3-0.

Michael Flynn is the man that will occupy the home dugout when Latics come to Rodney Parade again.

He took over in March 2017 with County 11 points adrift at the bottom of League Two and looking a certainty to be playing their football outside of the EFL in the next season.

However, Flynn and his side were able to pull off a great escape, maintaining their Football League status.

Since then, Flynn has overseen two impressive FA Cup runs in his time at Rodney Parade.

They reached the fourth round in 2018 after beating Leeds United in the third round and earning a replay against Spurs in the fourth round, before losing 2-0 in the replay at Wembley.

County would go one better in the next FA Cup campaign, shocking Premier League opposition Leicester City 2-1 in the third round. They then drew at Championship side Middlesbrough in the fourth round and made it into the fifth round with a 2-0 win at Rodney Parade in the replay.

Their reward for progressing to the fifth round for the first time since 1949 was a home tie to Premier League champions and eventual Emirates FA Cup winners Manchester City.

Pep Guardiola’s side ran out 4-1 winners on the day.

Current Newport County winger Keanu Marsh-Brown had a short spell with Latics in 2012.

Marsh-Brown signed for Paul Dickov’s side on the 30th of January 2012 after a successful two-week trial.

He would make his debut on the same day in a Football League Trophy match against Chesterfield.

He scored his only Latics goal in a 1-1 draw with Colchester United on the 28th of February but saw red the next week in a 2-1 defeat against Scunthorpe United.

In between leaving Latics and joining Newport, Marsh-Brown has had spells at Yeovil Town, Barnet, Forest Green Rovers and Dover Athletic.

He joined County in June 2018 and has made 16 league appearances scoring one goal.

Marsh-Brown has been capped at England U16 and U17 level and has also made three appearances for England C.

In March 2019, he was called up to the Guyana squad along with his older brother and he has since been capped nine times, scoring once.

Whilst current Head Coach Dino Maamria was a former assistant manager at Newport County AFC during the tenure of Graham Westley where he spent six months in Wales.

Latics have been allocated 422 tickets for the clash and they are priced as follow:

A reminder the supporters' coach departs at 8:30am. There is no price increase on the day.