As the Bundesliga becomes the first major European league to get back underway behind closed doors this weekend, which will be strange for German football but necessary due to the coronavirus pandemic, we take a look at the unlikely but heart-warming and genuine friendship between fans of Oldham Athletic and Eintracht Frankfurt.

German football is based on the ideals that supporters are at the heart of decision-making, so, it is no surprise that SGE fans find the link to Boundary Park a beneficial one. It means they get to see a true experience of English football, whilst on the flip side, local English football fanatics have the chance to witness first-hand what German football is about. A spectacle like no other, it evokes emotions and paints wonderful pictures which can be seen on a more regular basis due to the increased TV coverage back home.In return, Athletic fans have been treated to some special experiences over recent years, thanks partly to the increased success and profile of the Eagles after their German Cup win a few years ago. It has also meant they have competed at the highest level on the European stage against the likes of Arsenal and Chelsea over two legs in 2019, giving more supporters an opportunity to meet up in the capital.But how did it start? Well, over 35 years ago Latics fans met Frankfurt Fan Clubs EFC Bockenheim and Rhönadler at an international football supporters' competition in Paris. After supporting each other against the French, that unlikely meeting and bond grew into a serious relationship that has flourished ever since. 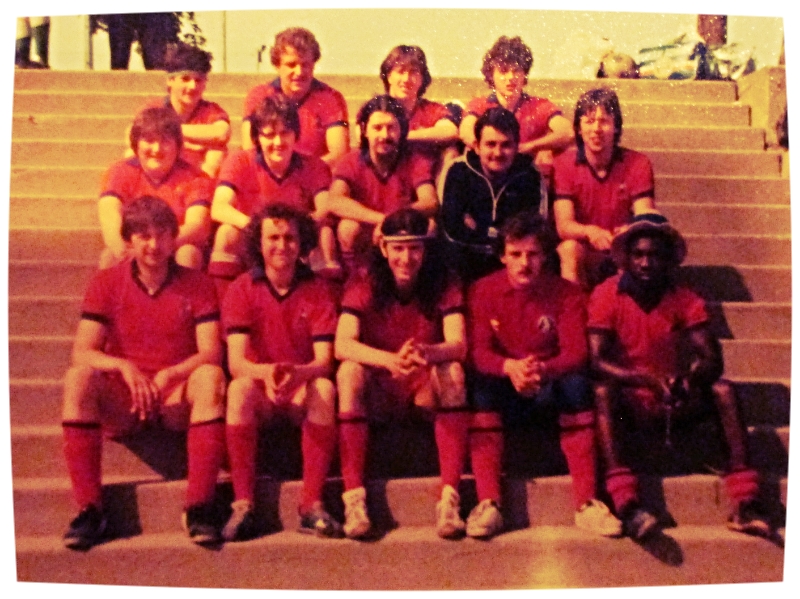 The fans first founded the partnership in 1982, with Bernhard Schulze and his friend Paul Duong being the pioneers for Frankfurt supporters to come up to Boundary Park in September 1983 of which the late Colin Shaw was their welcomed host. 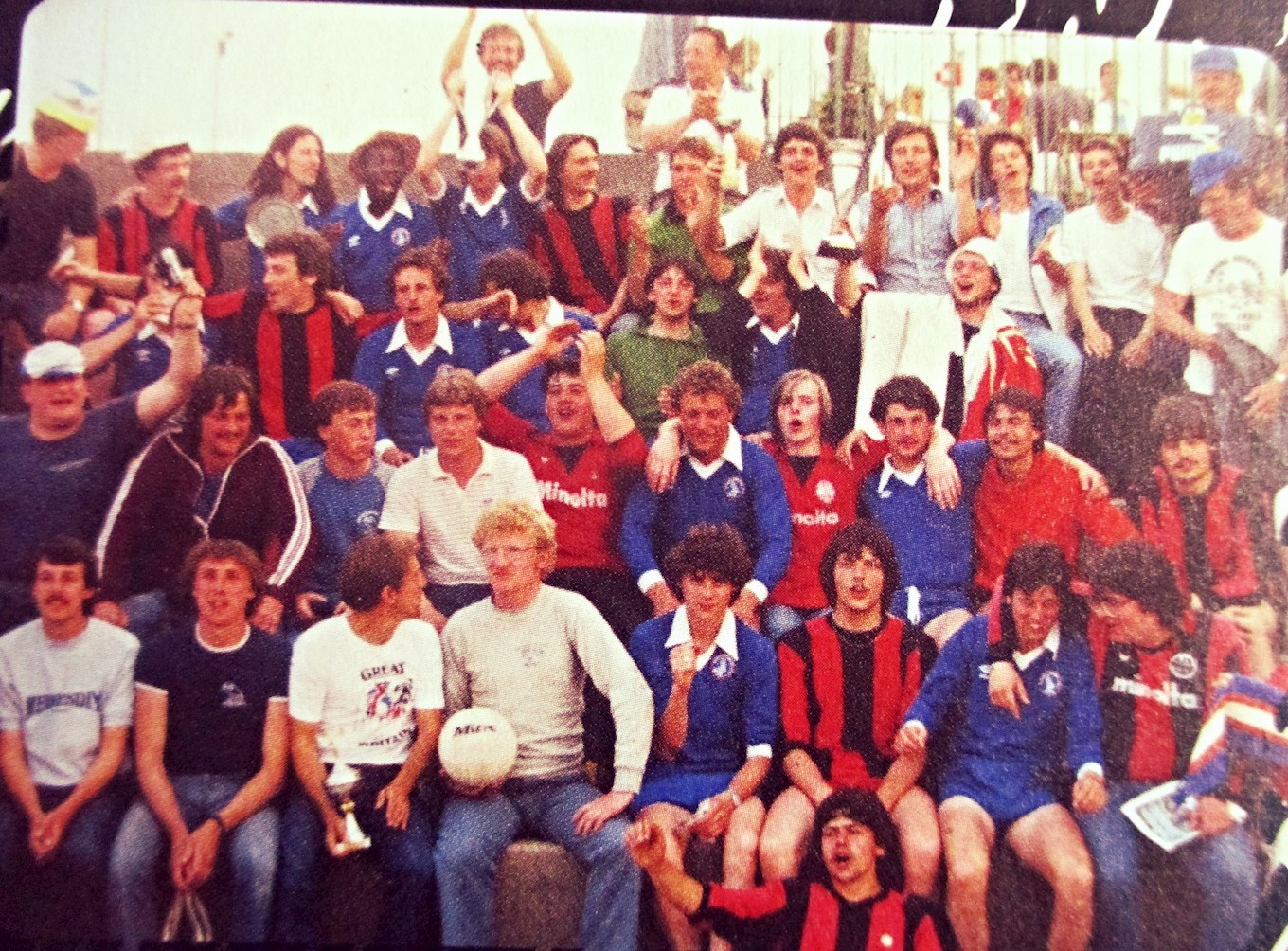 It has now become a regular pilgrimage that happens around eight times a year for both sets of fans to show their love for football in England and Germany. As the new generation learn about the bond, it signifies the true power of football and the thing we all miss in this current climate; meeting up with likeminded friends to watch your team and discover new places, new people and new cultures.The Euros in Germany '88 and then in England during ’96, in which Germany won the latter after breaking the Three Lions' hearts in the semi-final, as well as the 2006 World Cup in Germany naturally strengthened the relationship further as Frankfurt became a host city, with Oldham’s close connections to Manchester helping.A key outstanding component, though, that would well and truly set the partnership alight to a wider audience is the much-talked-about and much-needed friendly between both sides. Something which has been mentioned between club officials in the past few years, but, unfortunately, nothing has materialised as of yet. 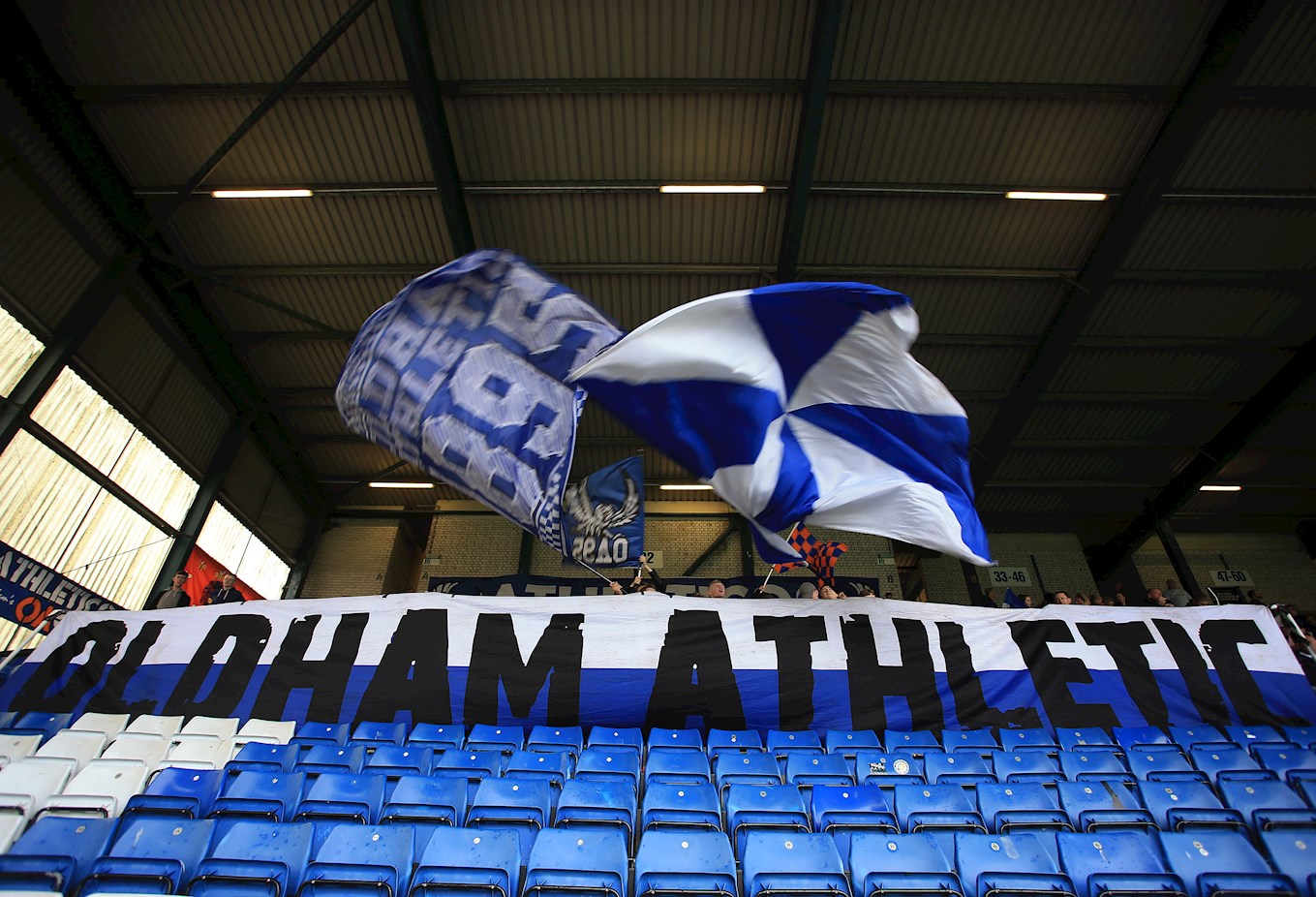 One of the greater factors being that Eintracht Frankfurt are now classed as one of the bigger teams in the Bundesliga, and similarly to Latics, take one of the best followings away from home at their level during domestic campaigns.Other traits between both clubs are common, as both outfits were founded within four years of one another and have a long-standing history in the game. Whilst the Waldstadion, which is the home of the Bundesliga club, has housed the German outfit for a considerable amount of time since the early 1900s, like Boundary Park has done for Latics, despite a number of upgrades to transform it into their current 50,000-seater complex. Another interesting connection between both teams is that they are founding members of their top competitive league. 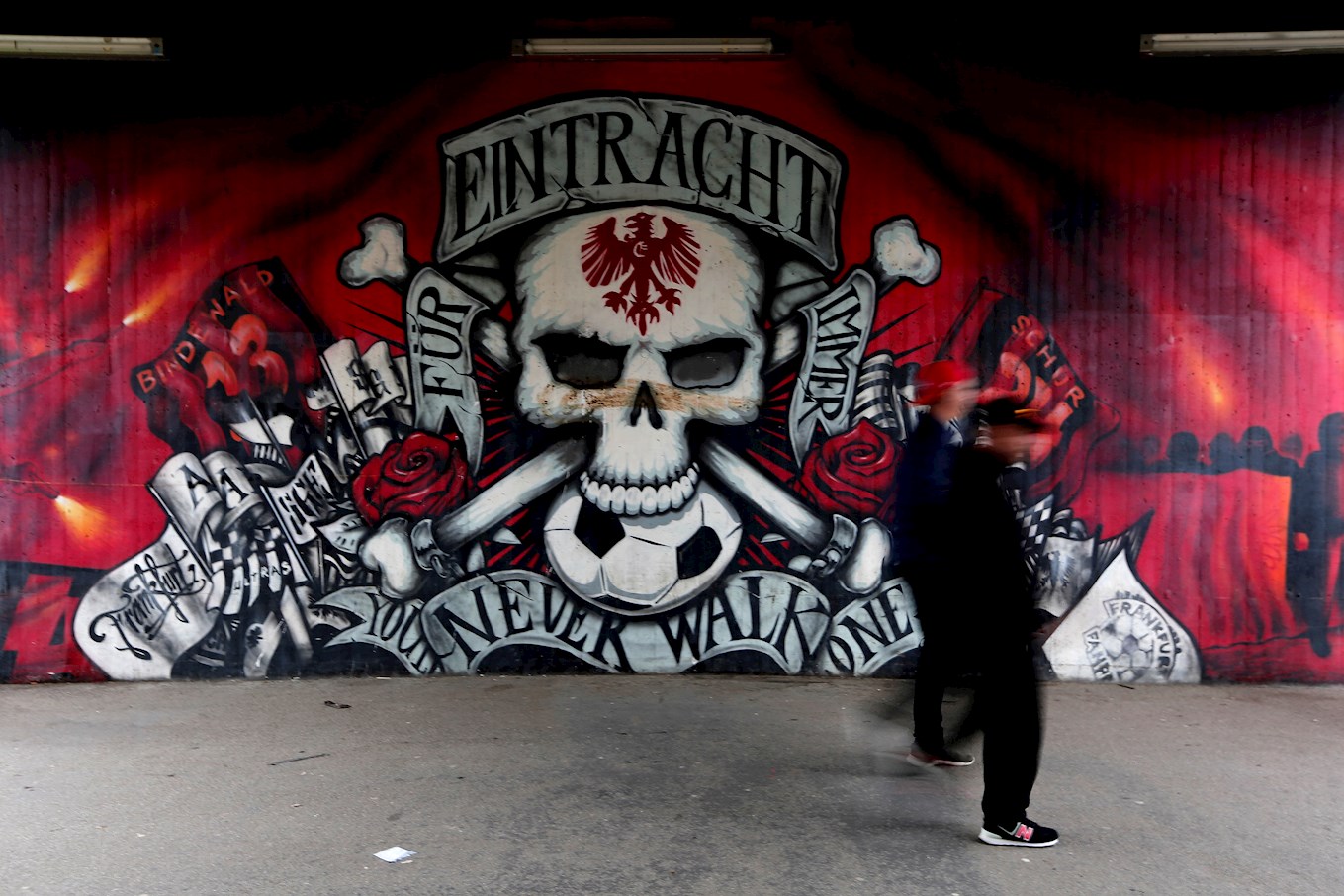 In terms of sharing players, Norwegian defender Tore Pedersen had spells at both outfits during his playing days in the '90s. Pedersen spent the 1993/94 Premier League season with Latics, before later spending the 1998/99 season at the Waldstadion and as such a Latics pennant is in the German team’s museum.When you delve deeper the original core group of supporters have a strong bond and have seen each other grow up over a number of years, attending family-related events away from the football including a group of Oldham fans going to the funeral of one of the originals from Frankfurt, Clemens Vesely to honour his memory and contribution.
Nurtured over a number of decades, the brothers are now considered extended family. There are four bricks in the Joe Royle Stand which belong to fellow Eintracht Fan Clubs, whilst most recently this season with the tragic news of Colin Moore’s incident after the game at Carlisle, who is also an Adler member, 12 of the Frankfurt group came over for his benefit event as a surprise at short notice, showing their respect goes well beyond the beautiful game.And back in 2015 in the Jimmy Frizzell Stand, both the Owls and Eagles teamed up to raise £1,500 for Dr. Kershaw’s Hospice by selling 600 litres of German cider. 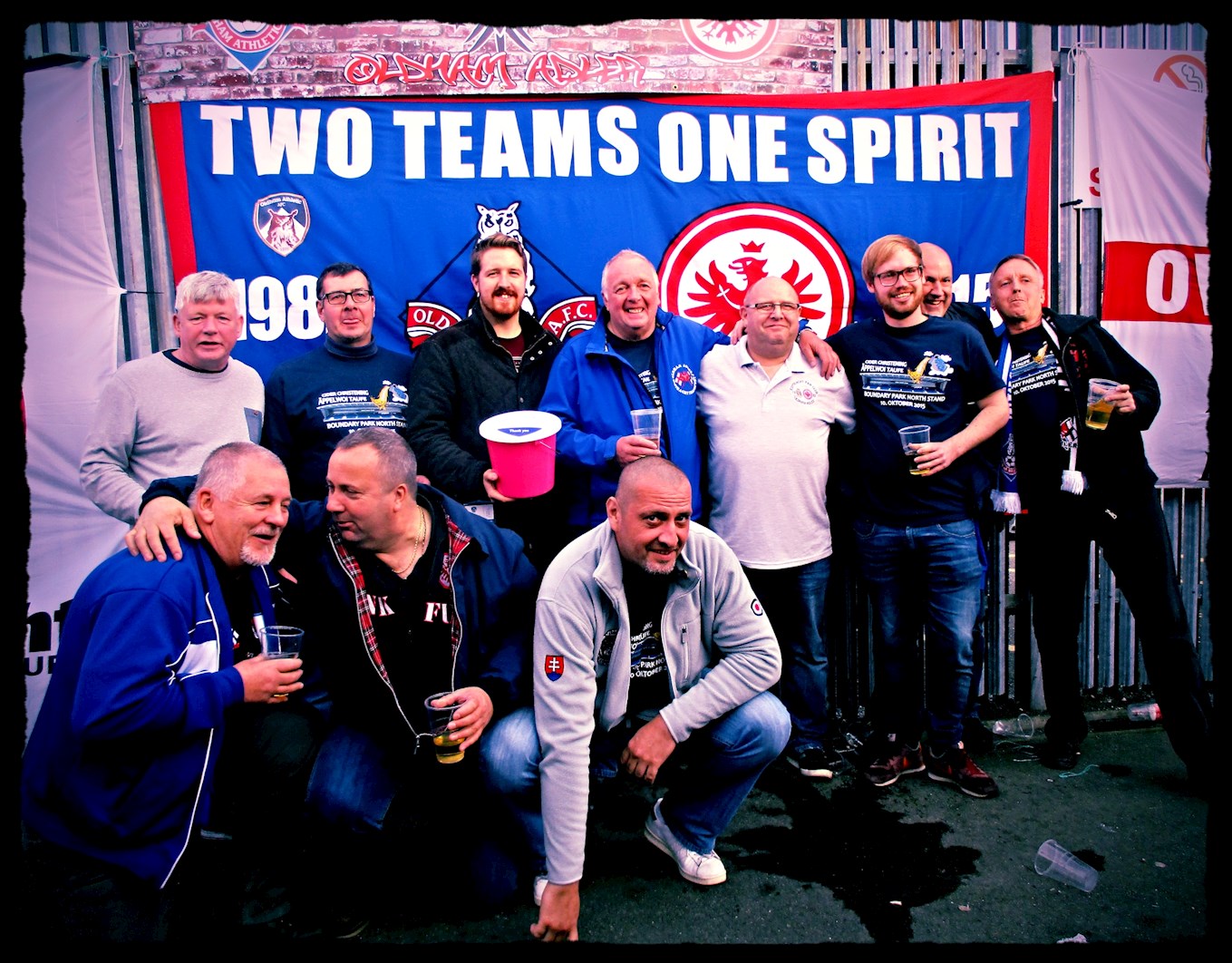 This has all resulted in EFC Oldham Adler (meaning Eagle) becoming an official Eintracht Fan Club in 2017 and the first in England, with membership numbers steadily growing year-on-year. Most recently, 20 members visited Frankfurt in December 2019 after Eagles fans did the reverse trip a month earlier. 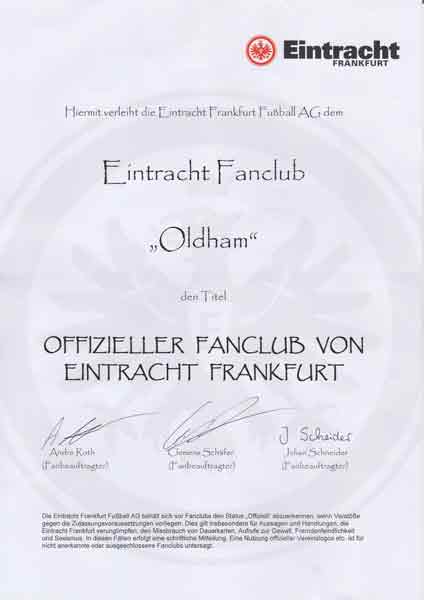 One Latics fan, Dom Weiss spoke of his experiences this unique link has given him; "I’ve been three times already and every time it's been brilliant. My first run-in with the Frankfurt fans was when we played Leeds at home and three of them were shouting at Casper Ankergren after Leeds scored and I wasn't aware of the friendship then. My next run-in was a few years later at a night with Rick Holden at The Junction and my interest naturally started to grow."My first trip to Frankfurt was in 2017 for a home game against Borussia Mönchengladbach and it turned out to be a special weekend for Oldham Adlers. We went over that weekend for EFC Bockenheim's 40th-anniversary party but the day before at another party we were made an official Eintracht Fan Club and the first in England."Whilst my most recent trip was December last year for the Europa League game against Vitoria Guimaraes and Schalke away where the stadium atmospheres are unreal. Although Frankfurt lost both games, it didn't take away from a great weekend. In between the games, we had trips to Fulda and Bad Homburg for the real Christmas markets and to visit more of our friends."He added: "You are always well looked after when going to Frankfurt and are never without something to do as the lads over there always have stuff planned. Other Frankfurt fans stop to ask questions when they hear the English accent and think it’s really fascinating and brilliant the friendship the two sets of fans share."

Looking forward to being back here on Thursday, going to be a good'un this weekend!! @oldham_adler #SGE pic.twitter.com/ifyk5nCdSv

With its 40th year on the horizon, if there's one thing that can be guaranteed when it is safe to do so, both sets of supporters will have plenty of catching up to do to further celebrate the special relationship they have created as part of the wider football family. Something that many other clubs will look at in awe, considering the growing popularity of European football amongst younger fans who use it as a way of travelling far and wide.
To get involved or find out more, visit: http://www.oldhamadler.com/ or follow @oldham_adler.
You can watch Frankfurt's home game against Monchengladbach on Saturday, BT Sport 1 at 4:45pm. 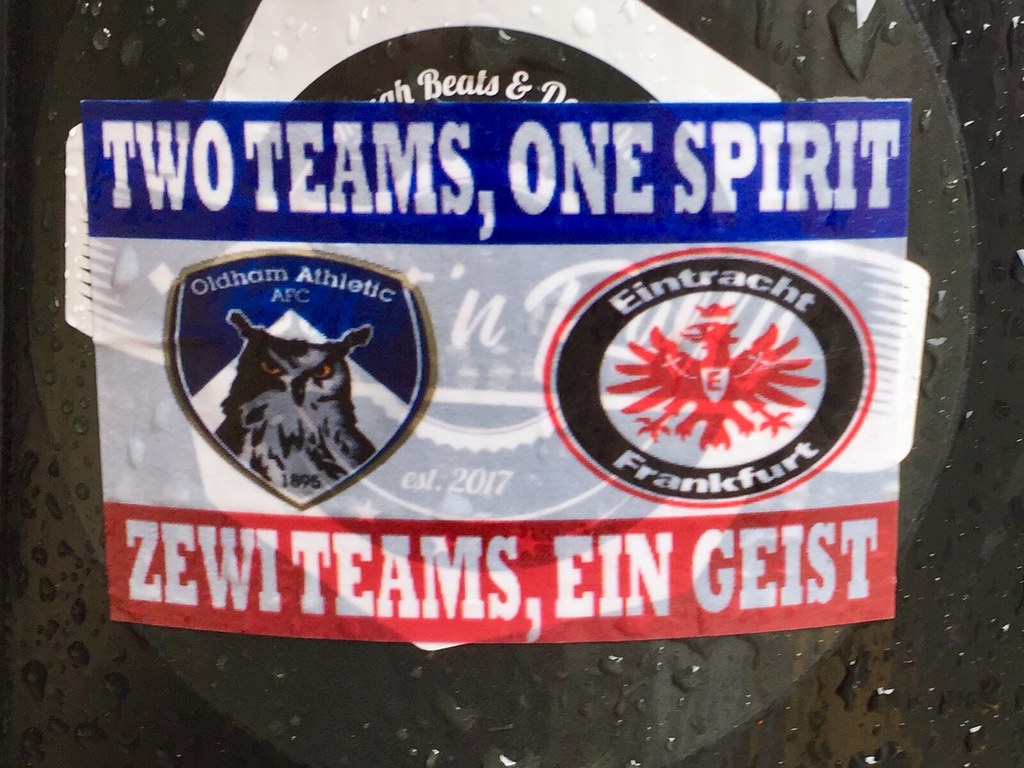