Latics switch their attention to the famous Emirates FA Cup where they travel to Hampton and Richmond for the second time in three years tomorrow (12:45pm KO).

Harry Kewell’s men go into the game on a high after a vital Sky Bet League Two win over Cheltenham Town in the week. Ex-Latic Reuben Reid had given the Robins the lead but goals from George Blackwood and Harry Clarke secured the points for Latics.

Oldham’s opponents play in the National League South and have picked up four points from their opening four league games.

On team news, the players confirmed absent due to injury are Andrea Badan and Zak Dearnley after coming off in the week, whilst Carl Piergianni continues to complete his self-isolation.

Conor McAleny will take a late fitness test and Sido Jombati could be back in contention for selection.

The Beevers have won three of their seven games in 90 minutes this season which has them in the First Round of the FA Cup and in 13th place in the league table.

This will be the second time that the two clubs have met almost on the same date as both teams also use the fixture to pay their respects for the annual Remembrance tradition.

Fans will fondly remember when Oldham came from behind to win 2-1 in November 2018 that sparked an incredible cup run featuring a 2-1 win away at Premier League side Fulham in the Third Round.

Chris Dickson had given the Beavers the lead from the penalty spot in the 15th minute and the hosts looked like they were on their way to a famous cup upset.

The tie looked to be set for a Boundary Park replay when Rob Hunt scored to restore parity but a 94th minute goal from Callum Lang sent Latics through to the Second Round clash with Maidstone United.

Another current link between the teams is the player Rene Steer who currently plays at left-back for the hosts after signing at the start of this campaign.

The former Arsenal academy graduate signed a 12-month contract in June 2009 with Latics after a successful trial before suffering a serious injury.

Whilst this is where Oldham come into the competition, Hampton and Richmond have already had to win three games to make this far.

In their first tie, they overcame Corinthian Casuals to claim a 1-0 victory thanks to a goal from Rudriadh Donaldson.

Next up was a home tie against AFC Hornchurch. Despite taking the lead through Christian Smith in the 17th minute, Hampton found themselves trailing and needing a late equaliser from Niko Muir to take the clash to penalties where they would win 4-3.

Finally, an early goal from Muir saw them beat fellow National League South side to secure a place in the hat for the first round proper.

Hampton and Richmond are looking to progress into the Second Round of the competition for the first time in the club’s history.

It is their fourth time of making it into the first round proper and the they have participated in 55 FA Cup campaigns. 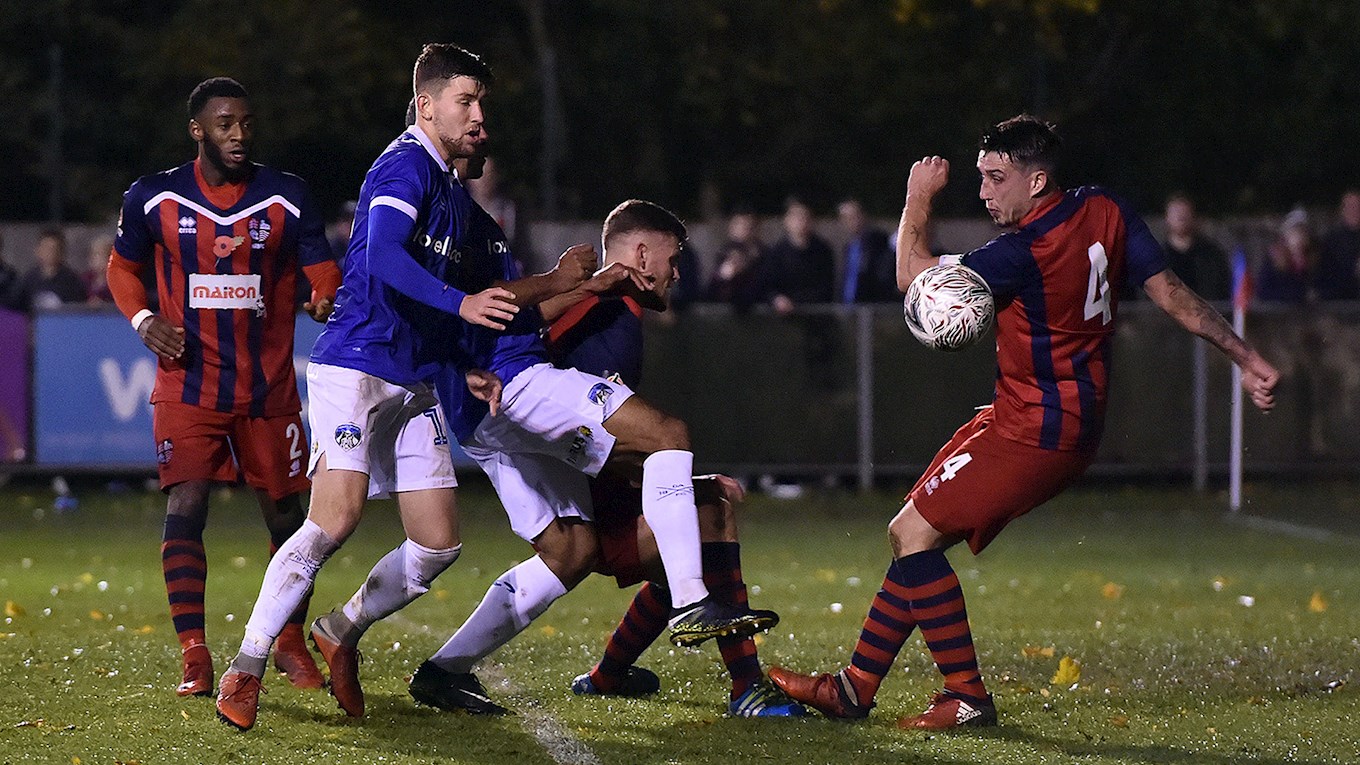 On the other hand, Oldham Athletic have a wealth of history in the FA Cup. Most notably is the 1990 run that saw Latics reach the Semi-Final before losing to Manchester United after a replay.

Latics have only failed to make it to the Second Round in one of the last nine seasons.

Niko Muir has scored two goals on the Beavers’ route to the First Round of the FA Cup.

Muir has shown he possesses goal scoring and scored 40 goals for his former club Hendon in the 2017/18 season which earnt him a move to the North East with Hartlepool United, where he played in the National League.

Whilst at Hartlepool, Muir scored six goals for the club before leaving to join the Beavers on a loan deal in January 2020. This was eventually made permanent this summer.

In the dugout for the hosts is Gary McCann, who was present in the original fixture two years ago.

McCann replaced the departing Alan Dowson in June 2018 after Dowson left the club to join Woking.

His previous clubs are Dulwich Hamlet and Hendon. He had been at Hendon for 13 years as a player, player manager and finally manager.

Hampton and Richmond play at the Beveree Stadium. 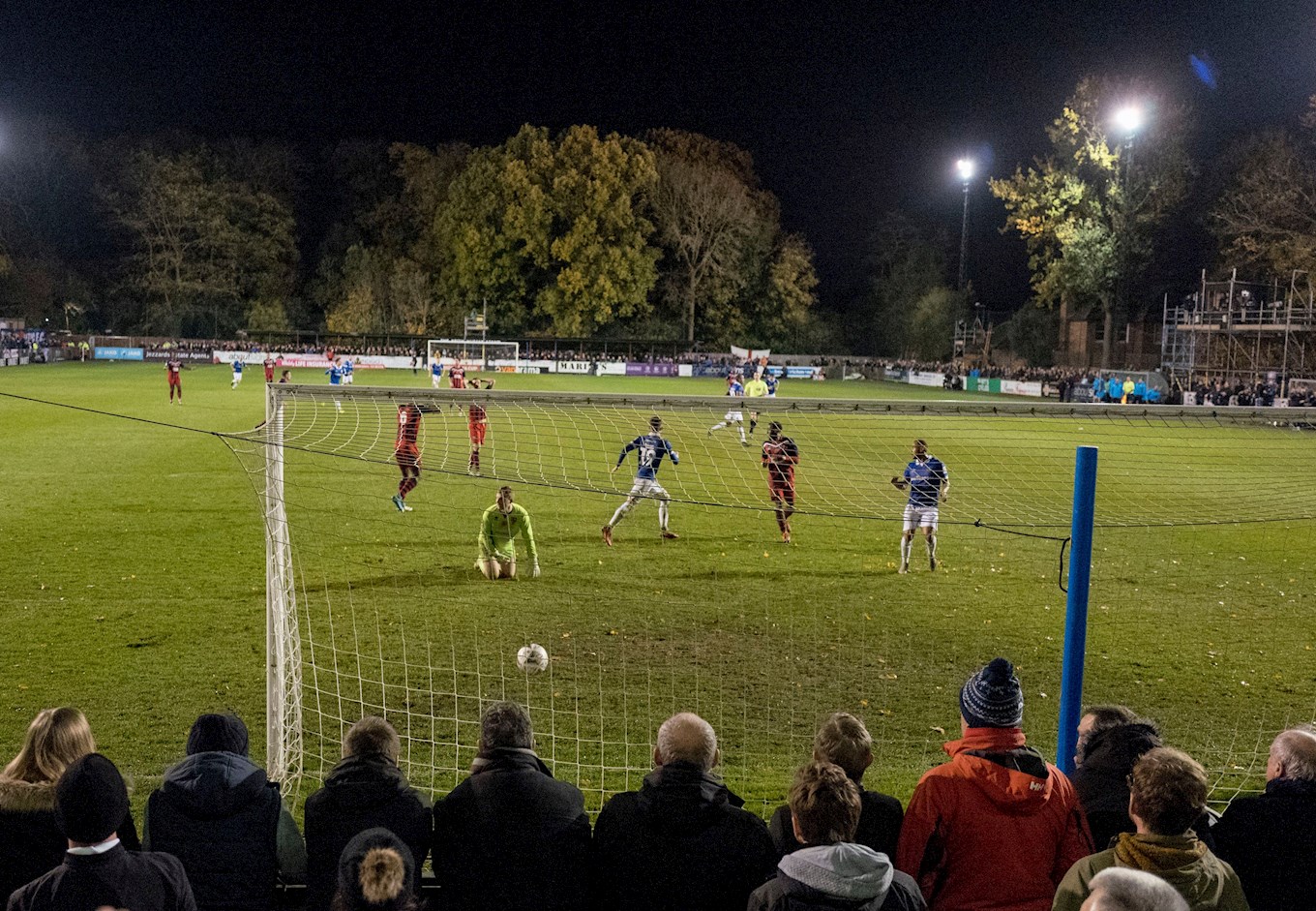 The ground has a capacity of 3,500 and that is also the record attendance which came in a 3-2 defeat to Hayes and Yeading United in a playoff final.

Often shortened to ‘The Bev’, it has been home to the club since 1959 and has also played home to Chelsea FC Ladies as well as being used as a polling station for elections.

The referee for the encounter will be Sam Purkiss.

He has taken charge of 10 games this campaign, mostly in Sky Bet League Two, handing out 19 yellow cards and four red cards in the process.

The last game involving Latics when he was in charge was last season in the 2-1 defeat at Crewe in February 2020.

His Assistants will be Mike Desborough and Joseph Stokes with the Fourth Official being Matthew Russell.

Latics are 8/13 favourites to ensure their name is in the hat for the Second-Round draw by winning in 90 minutes and 1/3 to qualify.

Because the game is still classed as behind-closed-doors, supporters can tune in live after the fixture was selected for live broadcast on, online platforms through both the BBC and BT Sport.

A match pass from iFollow isn't available as a result due to the rights holders.

Instead, an audio pass is still available for subscribers through the iFollow Latics service for the fee of £2.50. Please note, due to the hosts facilities this will not be specific club commentary but BBC Radio Manchester have kindly agreed for their feed to be taken instead on this occasion.

Dominic Dietrich and Mick Payne will be talking you through the action.