The Youth Team demonstrated impressive character, attitude and discipline in order to pick up a much-needed three points against tough opposition at the Vestacare Stadium.

Early into the encounter, the youngsters were thankful for their shot-stopper as Luke Southerington produced immense bravery to deny his opponent from inside the six-yard box.

With just ten minutes on the clock, Craig Large’s side broke the deadlock with a stunning piece of football. Vaughan, effortlessly pulling the strings in the middle of the park, had the vision to pick out Isaac Modi on the right-wing before the skipper’s low cross found the onrushing Atkinson inside the area, and his composed effort found the bottom corner.

Benny Couto showcased his abundance of ability as he dribbled past several red shirts before slotting Simms clean through on goal with an outside of the foot pass, however, the forward couldn’t beat the man between the sticks.

The hosts doubled their advantage in the 18th minute courtesy of Vaughan. He picked up possession deep inside the opposition’s half and proceeded to dance past a handful of defenders before cutting inside from the right-hand side and his left-footed effort deflected into the back of the net.

After the interval, Simms spotted the ‘keeper off his line and, ambitiously, tried his luck from the halfway line, but the ball cannoned against the crossbar to his frustration with a defender managing to clear the danger. 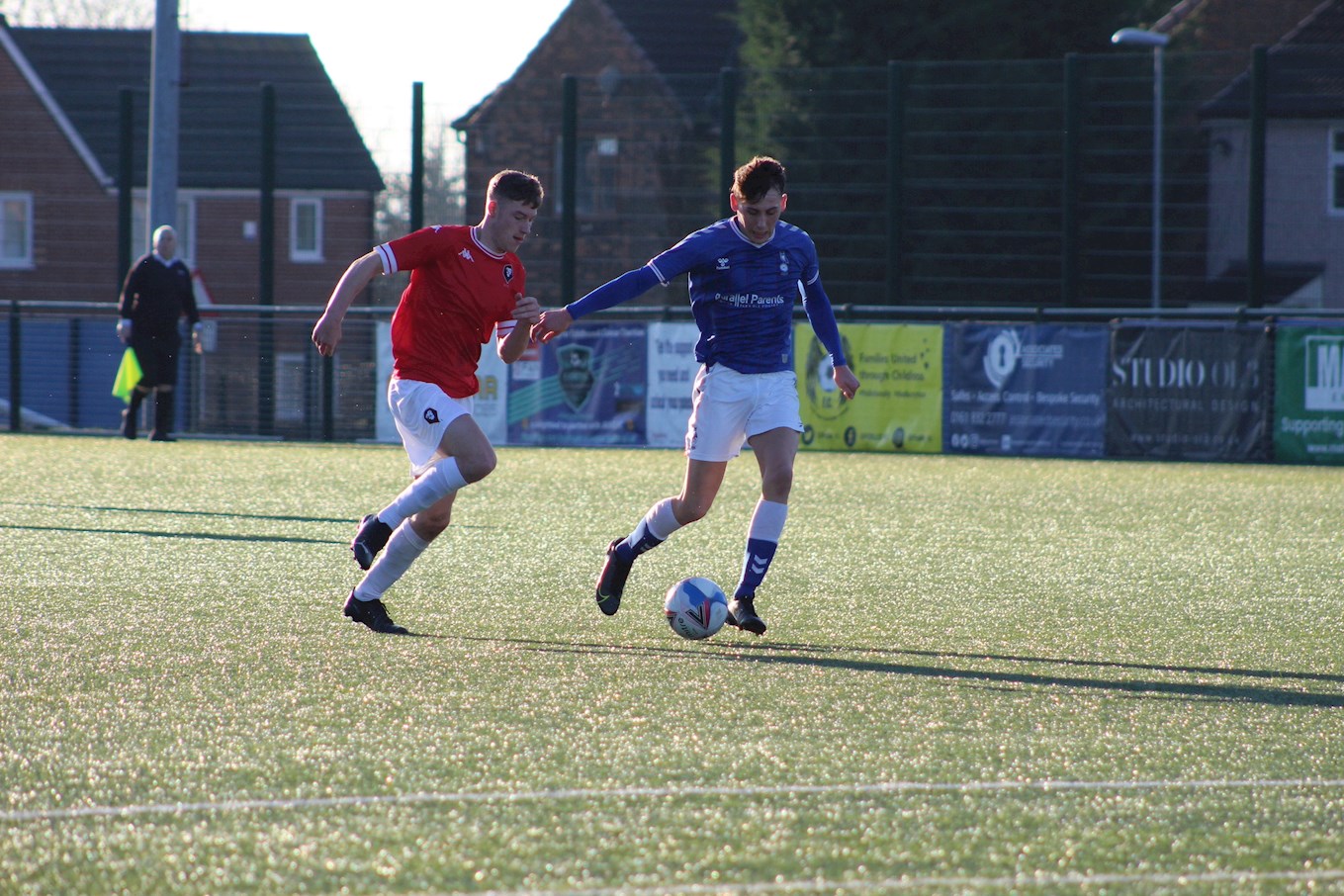 In the 61st minute, the Ammies restored a bit of faith as they pulled a goal back after Southerington pulled off a magnificent save from a free-kick. From the resulting corner, their number six climbed above his marker at the back post to powerfully direct his header on target.

Following that, Salford got themselves level in the match to the disbelief of the Oldham dugout. A perfectly-weighted pass allowed their number nine to race through towards the left-hand side and the frontman steered his strike across goal into the far bottom corner.

Latics continued to battle until the final whistle and earned their rewards as Simms netted a third in the 86th minute. The promising forward illustrated sheer brilliance with his close control which created space for himself to fire past the goalkeeper before reeling away in celebration.

In added time, the boys in blue secured their first league victory in seven outings with, once again, a free-flowing attack. Couto cut inside before coolly producing a clever reserve pass to Ryan Spencer inside the box and his low cross was bundled over the line by Forshaw.

After the game, Large said; “I thought that it was a good win. The boys started off really bright in the first-half and, typically, we kept hitting the crossbar, but we continued to create chances with two good finishes as well.

“So, to go into the break ahead was positive. But, once again, we began to drop off in the second-half and they got it back level. Thankfully, we found another little burst at the end and scored two goals to begin Christmas with a good result.” He commented. 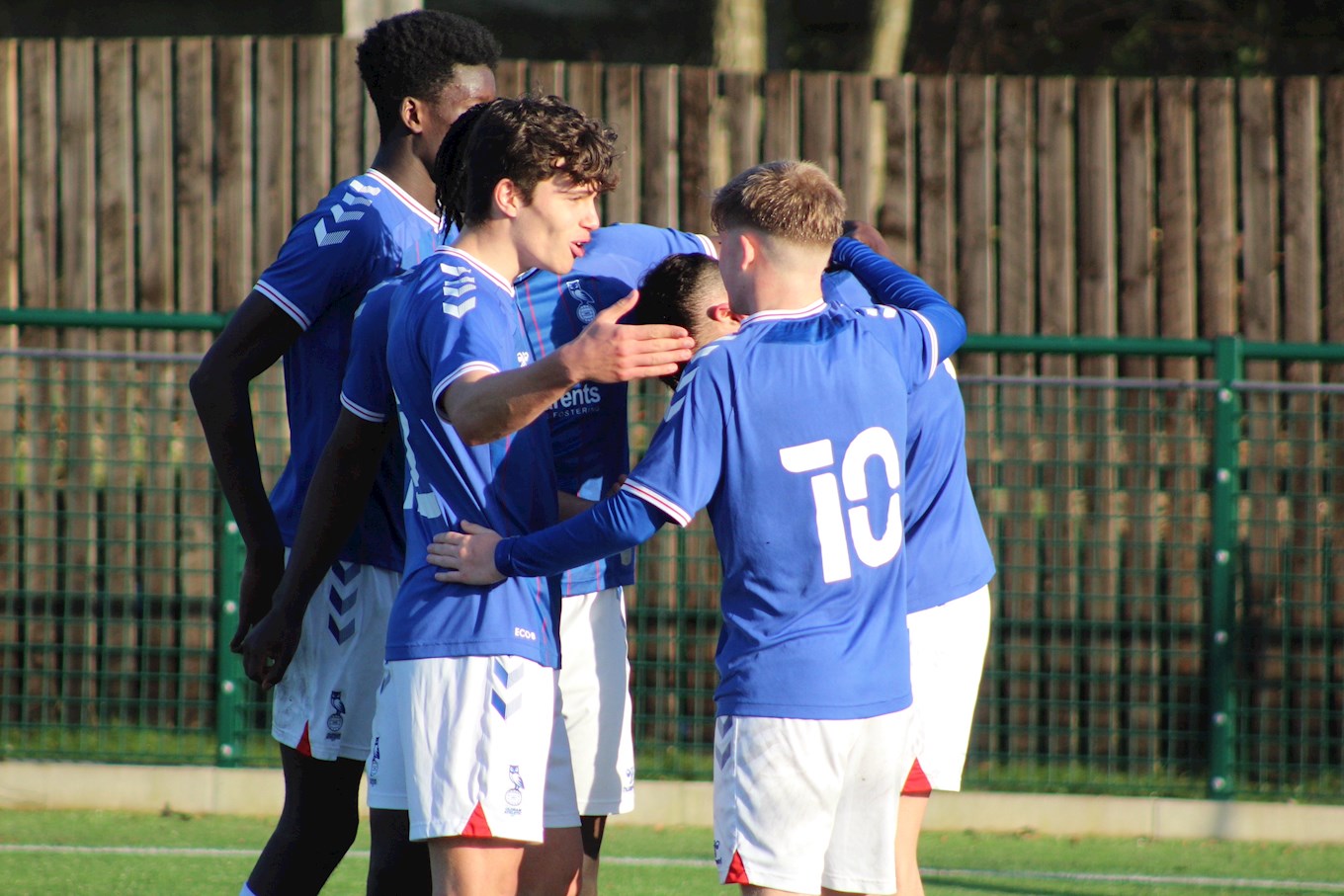 “It was disappointing to throw away a two-goal lead because it's something that we’ve spoken about in terms of taking our chances not conceding silly goals, which we've, unfortunately, done over the last few weeks. I thought that we’d turned the corner against Blackpool on Monday. But they dug in and showed some good character and resilience to come back and win the match.

“Harry (Vaughan) and Benny (Couto) played today because of the first-team game being called off tomorrow. It was important to keep their fitness levels going and they both put on an excellent performance with fantastic work ethic. It's easy when they’ve been around the first-team to come back and to think that it’s beneath them, but they both showed an excellent mindset.”

Please note, this is the Youth Team’s last fixture until the New Year, with upcoming fixtures available by clicking here.