Latics make the long journey down to Northampton Town this evening (7:45pm KO) in a Sky Bet League Two fixture and Keith Curle provided his thoughts ahead of the clash against his former employer.

The gaffer reflected the latest win against Port Vale and discussed the improvment in performances from his side in their recent outings.

“It’s about the manner of the performance and we conducted ourselves brilliantly on Saturday. I think that in the previous two games we had decent performances which were against Exeter and Ipswich, but we didn't get the just rewards that we needed.

“In the first Ipswich game, we deservedly got it to one-all and, then we won a penalty and on reflection, I spoke to PGMOL, The Referees’ Association, and they said that their players should’ve been sent off for the foul, so it would’ve left us with 30/35 minutes against ten men, but overall I've credited the lads for the draw.

“Following that, we went to Exeter, a team that are in and around the play-offs and trying to get promoted. We had more possession than them and we had more entries into the final third as well as putting more balls into the box, but we came away with no rewards.” He commented.

“Ipswich at home was settled by a silly mistake and a spectacular goal which deserves to win a cup tie. I was pleased with Saturday's performance against Port Vale, their fans came in their numbers, and they had momentum with an impressive unbeaten run, so we had to step up and be counted.

“If you have a look at the goals that we scored, I don't think they'll be replayed as fantastic goals, but something that we touched on in training is that we need to get more people forward and we need to get more people in goalscoring positions. The leash was off, and the players had that freedom to go and commit themselves in the box and I thought we got our rewards.”

Curle praised the vocal support from the fans throughout the whole game at the weekend, and he aims to get more supporters inside Boundary Park to enjoy their team’s performance.

“It's one of my immediate ambitions. I want to see that place absolutely full to the rafters because I thought that it was very noisy on Saturday and imagine if you get another few thousand Oldham fans in the ground, it will be unbelievable.

“It’s important to get bums on seats, supporting the team and Latics winning in front of our home fans is vital. The manner of the result and the manner of the game brings us one step towards that unity that we're striving for where everybody was playing their part to get that ball over the line. It’s a massive help to the playing department that we're all going in the same direction and there's a glimmer of what we're trying to do here.”

The boys in blue have failed to back up their three previous league wins this season, and he’s has put an emphasis on his players to build consistently so that they can start to climb the table.

“First of all, the players can take confidence in the performance levels, but we're in a results industry, and to grind out results we must be prepared to do the horrible side of the game in every match.

“They know that they must turn it up week in, week out and it doesn't matter if we're playing second-place Port Vale, third-place Exeter or fourth-place Northampton, it’s about what we do ourselves on the pitch.

“We've got to turn up and we've got to understand that we can cause teams problems. Likewise, as a footballing department, we're very respectful to the opposition, but we've got to nullify their strengths.”

On Saturday, the Head Coach welcomed back Jamie Hopcutt, Sam Hart and Ouss Cisse into his starting line-up following their long-term injuries and he’s relieved with the squad depth that's starting to show it's worth.

“I’m sure that there will be people saying that results weren't going our way, but we had seven, eight, nine, ten players constantly unavailable and, for example, against Brentford we had 15 players unavailable for various reasons which people say is an excuse, but they’re good players that can affect the game for us.

“Now, we’ve got those players back, there are characters back in the changing room and there are different personalities back on the pitch which makes us stronger.”

Curle spent over two years in charge of the opposition with the former England international guiding the Cobblers to a promotion to Sky Bet League One.

“It was the first game that I looked for as soon as the fixtures were released. I’m looking forward to going there without a point to prove and I don’t have any animosity towards the football club.

“I’m very proud of the promotion that we achieved, but there was one disappointment at the time that we didn’t gain that promotion in front of the Northampton fans at Wembley because it would’ve been an immense atmosphere to celebrate the successful campaign.”

Like always, there’ll be a loyal contingent of Latics fans travelling to the game as well as several supporters watching on iFollow and Curle’s keen to reiterate his appreciation to them. 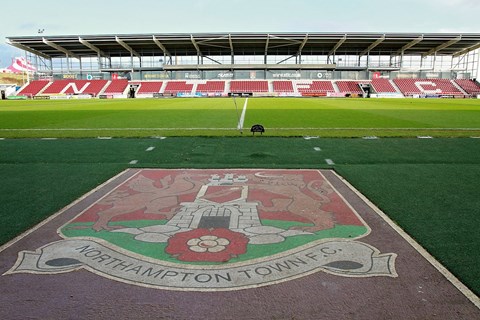 “If you ask any of the players, they thrive in that environment. That atmosphere coming off the pitch on Saturday, knowing that they had given everything for the club and they've played for the shirt in front of the supporters and earned the win, because no one gives you a win.

“There are lots of different ways to win a game of football, some days you’ve got lovely football with individual brilliance and individual skill. On other days, the players have got to be brave and dig in to see out a result. This game is no different, it's going to be tough but we're up for it and ready for the challenge.”