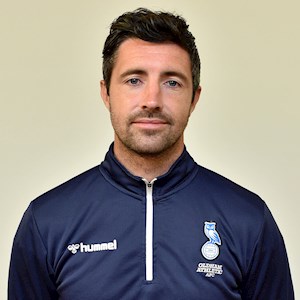 The immensely experienced defender returns to Latics after spending time on loan with the club in 2009 and will also occupy a coaching role in the next step of his career alongside Colin West and Keith Curle in order to enhance the development of the younger players.

Sheehan, who can operate at left-back and centre-back, has grown a reputation to be a resolute defender and a set-piece specialist with his wand of a left-foot. Throughout his career, he’s consistently delivered pinpoint corners as well as finding the back of the net from free-kicks, netting 30 goals across his playing spell.

Most recently, he applied his trade at Northampton Town with our current Head Coach and Assistant Head Coach in Sky Bet League One after spending time with fellow third-tier side Lincoln City in the season prior.

Sheehan began his career in 2003 at Leicester City and after a loan spell with Leeds United, he joined the Yorkshire side permanently with the legendary Gary McAllister in charge of the Whites.

In 2011, he put pen-to-paper on a deal with Notts County and he spent three-years at Meadow Lane which proved to be successful on an individual basis as he was awarded the club’s Player of The Year award for the 2013/14 campaign.

Whilst at the Magpies, he helped develop and played alongside England international Jack Grealish and Scotland international Callum McGregor. Sheehan netted a penalty at Boundary Park on the last day of the season to ensure County’s Sky Bet League One status in 2014.

After spells with Bradford City and Peterborough United, Sheehan joined Luton Town and the 34-year-old played a vital role in the Hatters’ back-to-back promotions to the Sky Bet Championship. To add to this, he was named in the PFA Team of The Year as well as Luton’s Player of The Season for the 2017/18 campaign.

Overall, the Irishman has made over 450 appearances in the EFL which include other clubs such as Leeds, Swindon and Bradford as well as representing his country at U21 level on five occasions.