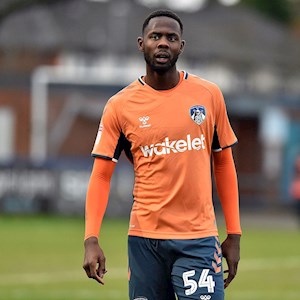 Emmanuel 'Mani' Dieseruvwe came to the club on loan from Salford City until the end of the season.

The forward joined the Ammies from Kidderminster in 2017, playing a pivotal role towards the back end of the 2017/18 campaign as the club secured promotion to the National League.

Dieseruvwe had a brief loan spell at Chester during the 2018/19 season but returned to Salford and scored the opening goal in the play-off final at Wembley as the Ammies sealed consecutive promotions. New Latics signing Carl Piergianni earlier this week was also on the scoresheet that day.

The 24-year-old netted 14 times in 83 appearances in all competitions for Salford, including the club’s first ever goals in the Football League, as he hit a brace against Stevenage on the opening day of the season when Dino Maamria was in charge.

Dieseruvwe came through the ranks at Sheffield Wednesday, where he spent time on loan at Hyde, Fleetwood Town - making his football league debut aged 18 - and Chesterfield. His Chesterfield move soon became permanent in 2015, before he joined Mansfield Town on loan later in the campaign.

The 6’5 striker made a switch to Kidderminster in 2016, scoring four times during his time in Worcestershire. He spent the latter stages of the 2016/17 season on loan at Boston United.

Following his release from Kidderminster, Dieseruvwe signed for Salford, making significant contributions in the promotion run-in during both the 2017/18 and 2018/19 seasons.