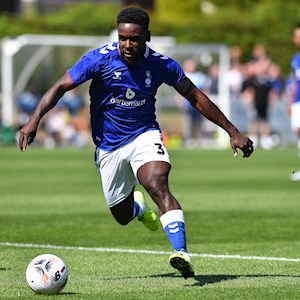 Left-back Zaine Francis-Angol was among a raft of defensive additions to the Latics squad ahead of the current season, joining on a one-year contract.

The former Hartlepool United and Motherwell player, who can also operate as a left winger, becomes the seventh summer addition made by manager John Sheridan.

Capped 19 times by Antigua & Barbuda, Francis-Angol featured in Hartlepool’s successful National League play-off quest in 2021, before also playing on loan for Stockport during their promotion from the same division last campaign.

After starting out as a youngster at Tottenham, Angol moved to Motherwell in 2011, featuring more than 60 times in the top flight of Scottish football after working his way into the first team.

He spent two seasons at AFC Fylde, again featuring in the National League play-offs during both campaigns whilst also winning the FA Trophy. After a season at Accrington, he then moved to Boreham Wood before joining Hartlepool for the latter part of the 2020/21 season.

Angol first featured at international level for Antigua & Barbuda in 2012, qualifying through his mother’s country of birth and participating in World Cup qualifiers, as well as the CONCACAF League of Nations.