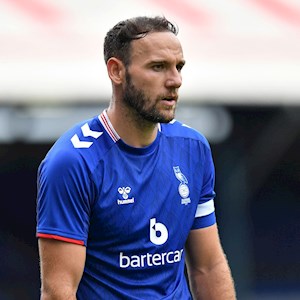 Dan Gardner returned to Boundary Park on a two-year contract ahead of the current campaign.

The 32-year-old midfielder, who played 72 times for Latics across two seasons from 2017, re-joined the club after spending recent seasons with Wigan and Doncaster.

Gardner reunited again with John Sheridan after working together during his previous time at the club and brings significant class and experience to the squad.

Originally from Manchester, Gardner’s first professional club was Celtic, where he spent time in the youth set-up before continuing his development with Crewe, expericing EFL football for the first time.

After time with non-league Droylsden, he properly established himself during three seasons at Chesterfield scoring ten times, including some impressive strikes from range, in addition to loans at Tranmere and Bury.

It was in the summer of 2017 that Gardner first joined Latics, making a big impression at Boundary Park, only to sustain a serious injury.

He joined Wigan in 2020, featuring 40 times, before spending the last season with Doncaster.