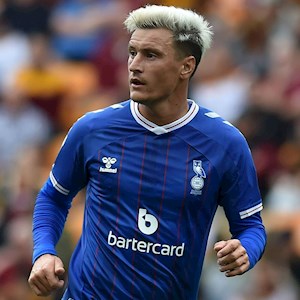 In August 2021, Oldham Athletic confirmed that Jamie Hopcutt signed a one-year deal with an option.

Most recently, Hopcutt was with Israeli side Hapoel Kfar Saba and showed his attacking prowess throughout his appearances in their top-flight.

Born in York, the winger and attacking midfielder spent some years in the non-league circuit with the likes of York City, Ossett Town and Tadcaster Albion before earning a career-changing move in Sweden with Östersunds FK.

The 29-year-old caught the eye of current Brighton & Hove Albion Head Coach Graham Potter, who was in charge of the Scandinavian outfit, after seeing him score a hat-trick in a trial match invited him over for a short period before extending his stay for years.

Hopcutt’s eight-year spell with ÖFK was quite remarkable as he played a major role in the club’s two promotions which took them from the third-tier to the Swedish top-flight as well as achieving a breathtaking UEFA Europa League adventure.

In the 2015 campaign, he manufactured his best personal season as he extraordinarily scored 15 goals in 24 games which fired them to a well-earned promotion.

The creative-minded player helped guide the club to the round of 32 in the prestigious European competition, beating the likes of Galatasaray, PAOK and Hertha Berlin in the process. Although they were beaten over two legs by Arsenal, they actually beat the Gunners at the Emirates in the first encounter with Hopcutt receiving global recognition for his sensational performance as well as scoring against the Turkish giants in the earlier rounds.

Overall, he managed to make 188 appearances and found the back of the net 46 times whilst securing a legendary status at the Jämtkraft Arena.

His next port of call arrived in the format of GIF Sundsvall, another Swedish club, and Hopcutt produced some fine performances in the blue of Giffarna, managing to net three goals in the Allsvenskan.